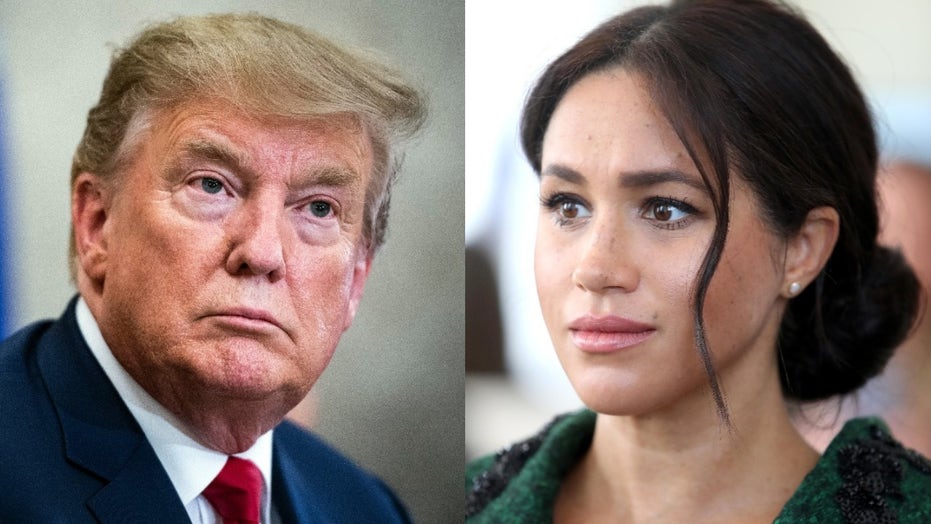 President Trump has offered up his opinion of Meghan Markle.

During a recent press conference, a reporter asked Trump, what he makes of Markle and her husband, Prince Harry encouraging Americans to vote in the upcoming election.

While asking her question, the reporter said that the royal pair "essentially encouraged people to vote for [Democratic nominee] Joe Biden."

"I'm not a fan of hers," he said at the press conference. "And she probably has heard that. But I wish a lot of luck to Harry because he's going to need it."

The Hill published a clip video from the conference to Twitter.

Prince Harry (left) and Meghan Markle (right) announced earlier this year that they would step away from their royal duties. They have since moved to Santa Barbara, Calif., with their 1-year-old son Archie and signed a production deal with Netflix. (AP Photo/Kirsty Wigglesworth, File)

The president has spoken publicly about Markle, 39, and Harry, 36, a number of times, including shortly after they announced that they would step away from their duties as senior members of the royal family.

MEGHAN MARKLE, PRINCE HARRY RESPOND TO PRESIDENT TRUMP'S TWEET ABOUT NOT PAYING FOR THEIR SECURITY IN LA

"Well, I think, you know, I don't want to get into the whole thing," Trump said during an interview with  "The Ingraham Angle" earlier this year. "But I find it, I just have such respect for the Queen. I don't think this should be happening to her."

Citing maternity leave, Markle also skipped out on a handful of events during Trump's state visit to the U.K. in June 2019.

Around the same time, a past video of Markle resurfaced in which she said she'd be voting for Hilary Clinton in the 2016 election, calling Trump "misogynistic."

Then, an interview with the president was published, in which he reportedly called Markle "nasty."

Trump has since denied using such language.

TRUMP ON ROYAL 'MEGXIT' DRAMA: 'I DON'T THINK THIS SHOULD BE HAPPENING' TO THE QUEEN

Meanwhile, on Tuesday, Markle and Harry spoke about the importance of voting during their segment of the broadcast celebrating Time magazine's most influential people of the year.

Harry is a citizen of the U.K. so he's ineligible to vote in the upcoming presidential election, told viewers that he hasn't "been able to vote in the U.K. my entire life," he said according to People magazine, because members of the royal family are restricted from doing so.

Trump said in a press conference that he is 'not a fan of' Meghan Markle. (Photo by Joshua Roberts/Getty Images)

Harry continued: "As we approach this November, it’s vital that we reject hate speech, misinformation and online negativity."