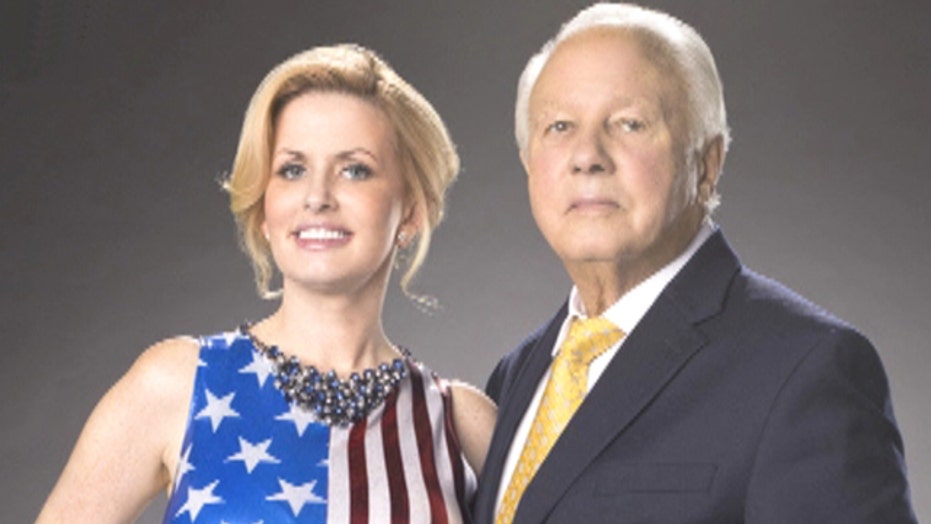 Prison pen pals turned lovers, Edwin and Trina Edwards are the stars of A&E’s new reality show ‘The Governor’s Wife.’ The 86-year-old three-time former Louisiana governor and ex-con stopped by the Fox411 studios with his 35-year-old wife and their 3-month old son.

The 50-year age gap is not the strangest part in the Edward’s unusual love story. The pair actually met while Edwin was serving time on racketeering charges. Trina, who was in school at the time, picked up a copy of Leo Honeycutt’s biography of the former governor and became fascinated with her future husband’s story.

She began writing Edwin who then arranged for her to visit him in prison.

“Well, she asked if we met in a typical way. Did you hear that?” Trina asked her husband who is hard of hearing.

“Very, very untypical. A-typical, unique to be exact,” Edwin told Fox411. “I was in the last year of my prison term…and after she read the book, she became interested in my career and asked to visit me. And I arranged for her to visit me and after that we got to know each other well and she came to visit me every visiting day thereafter.”

“And that’s an unusual story for a man my age and a beautiful young woman her age,” Edwin continued. “But thank goodness it happened. They sent me to prison for life, look what I came back, a good-looking wife.”

Both Trina and Edwin admit their story is “unique,” but insist their relationship works for them.

“My husband is an amazing husband,” Trina told Fox411. “He’s a wonderful father. Our marriage is better than most people’s marriage when they’re the same age.”

“Can I have a copy of this film?” Edwins joked.

With such a large age gap, Trina is 50-years Edwin’s junior, the couple is used to fighting off gold-digging rumors.

“I don’t know how it happened or why it happened but I absolutely fell in love with him,” Trina said. “And besides that, he doesn’t have as much money as most people think. So I’d be a pretty poor gold digger if that’s what I was in for.”

Trina and Edwards both have children from previous relationships; Trina has two teenage boys and Edwins has four children over the age of 55. Together, the newlyweds have a 3-month-old son conceived through in vitro fertilization.

“[The reality show] follows us from the time we decided to have a child,” said Trina. “We went through the IVF process, so it follows along with the IVF process and I think the season finale is actually when I gave birth to my son. So it follows the entire pregnancy, which was a pretty rough pregnancy.”

Despite Trina being a stepmother to daughters twice her age, the Edwards say their modern-day ‘Brady Bunch’ gets along just fine.

Her husband agreed. He said their reality show will show people that he and his young wife are just like any other “normal” couple.

“People are going to be surprised at how normal in most respects our lives are,” he said. “And given, in spite of the fact that there’s this great difference in our age, the fact that I have 4 children over 55-years-old and now a 3-month-old baby and she’s got two teenage boys. A situation that the average person, not knowing or having been with us would raise his or her eyebrows and say that’s never going to work but believe me it has worked and I’m very proud of it.”

Edwin wasn’t always on board for a reality show, it took some convincing from wife Trina.

“I was reluctant to do it because all my adult life I’ve been in politics for 45 years and I had gotten to where I kind of wanted to get out of the public limelight for the rest of my few years,” he explained. “I was reluctant to do IT, but what 85 year old man could look at her and refuse her whatever request she made.”

For a sneak peek of ‘The Governor’s Wife’ airing on October 27on A&E, watch the video above.