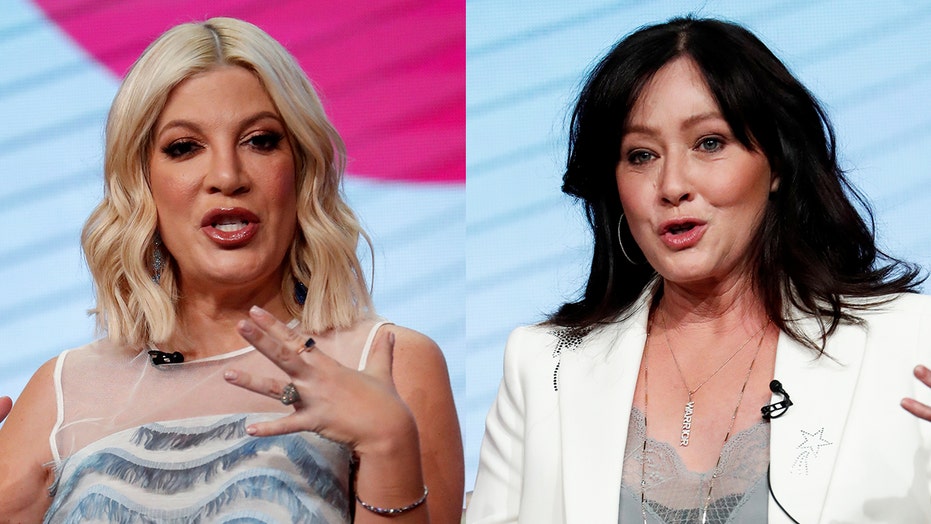 Shannen Doherty is getting support from her friends and co-stars following her stage 4 cancer diagnosis.

The 48-year-old actress announced on Tuesday in an interview on "Good Morning America" that her cancer had returned. Hours following her heartbreaking health announcement, Doherty received a message of support from her "90210" co-star Tori Spelling.

Doherty took to the photo-sharing platform on Tuesday to share an uplifting Peanuts cartoon with her fans. The sketch shows Charlie Brown and Snoopy sitting side-by-side on a dock looking out at a body of water.

"We only live once, snoopy," a bubble over Charlie Brown's head reads.

"Wrong! We only die once. We live every day," Snoopy responds.

In the "GMA" segment, the "Charmed" actress explained to Amy Robach that her terminal diagnosis is still something she is coming to terms with.

"I don't think I've processed it," she explained. "It's a bitter pill to swallow in a lot of ways."

Doherty, who was first diagnosed with breast cancer in 2015 but entered remission following chemo and radiation, opened up about how the recent diagnosis has affected her.

"I definitely have days where I say, 'why me?' And then I go, 'well, why not me?' Who else? Who else besides me deserves this? None of us do," she told Robach. "But I would say that my first reaction is always concern about how -- how am I going to tell my mom, my husband."

In August, Doherty told People magazine she was "lucky to be alive every minute."

According to the outlet, Doherty initially underwent hormone therapy before undergoing a mastectomy, followed by back-to-back rounds of chemo and radiation. Then in 2018, she underwent reconstruction with an innovative surgery called DIEP flap, in which the breast is rebuilt using the patient’s own tissue.