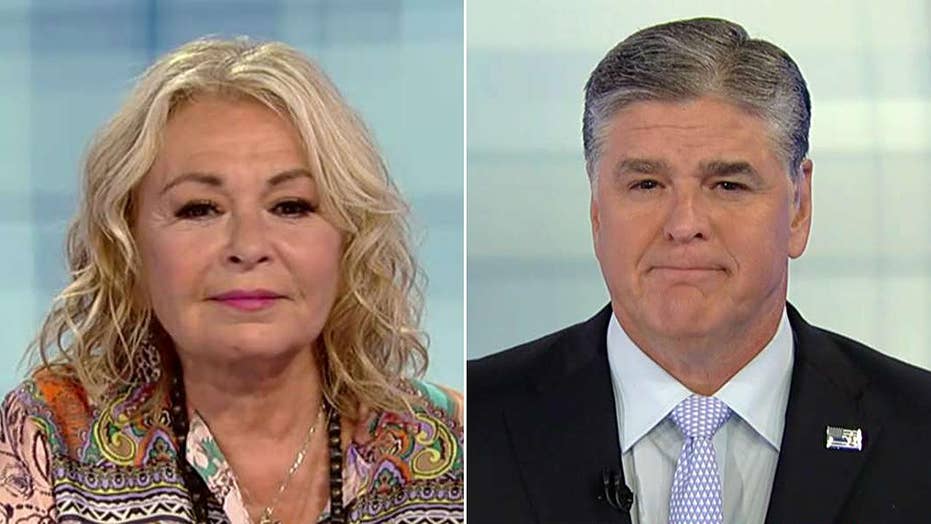 Roseanne Barr sits down for an interview on 'Hannity' after being fired from the 'Roseanne' reboot.

Roseanne Barr, the embroiled television star whose namesake show was canceled after she tweeted racist sentiments about a former Obama administration official, said Thursday night that she's not a racist.

Speaking in her first national television interview since the scandal, Barr told Fox News' Sean Hannity that she was "so sad that people thought" her tweets about Valerie Jarrett were "racist."

"I've apologized a lot, it's been two months," Barr said. "I feel like I have apologized and explained and asked for forgiveness and made recompense, that's part of my religion."

Barr made headlines after she tweeted in May that Jarrett, who is African-American and was born in Iran, was as though the "muslim brotherhood & planet of the apes had a baby."

The television star followed-up with an apology to Jarrett and "all Americans ... for making a bad joke about her politics and her looks."

Barr on Thursday night said that she "made a mistake. It cost me my life's work."

Roseanne Barr retweeted a negative comment about former Obama aide Valerie Jarrett, shortly after vowing that she was ready to make amends for 'the pain I have caused.'

"I was so sad, and I'm so sad that anyone thinks that of me," Barr told Hannity. "I never meant to hurt anybody, or say anything negative about an entire race of people."

Barr also addressed Jarrett directly and apologized for the tweets, advocating for a broader dialogue on race relations. "We need to talk about race and everything that's connected to it," she said.

She also claimed that her contract with ABC protected her from any mistakes she were to possibly make. Barr claimed she was allowed 24 hours to correct a mistake, adding she wanted to make media appearances to explain her tweets, but that the network didn't allow her to do so.

Barr said that while she could've legally fought the firing, she felt leaving the show was part of her "recompense," and that she signed off on her staff joining ABC's spin-off, "The Conners."

In the wide-ranging interview, Barr also told Hannity that her infamous 1990 performance of The Star-Spangled Banner, in which she shrieked the song, grabbed her crotch and spit on the ground, was a mistake.

"Well that's what the stupid pitcher told me to do," she said. "Never take comedy from a pitcher."