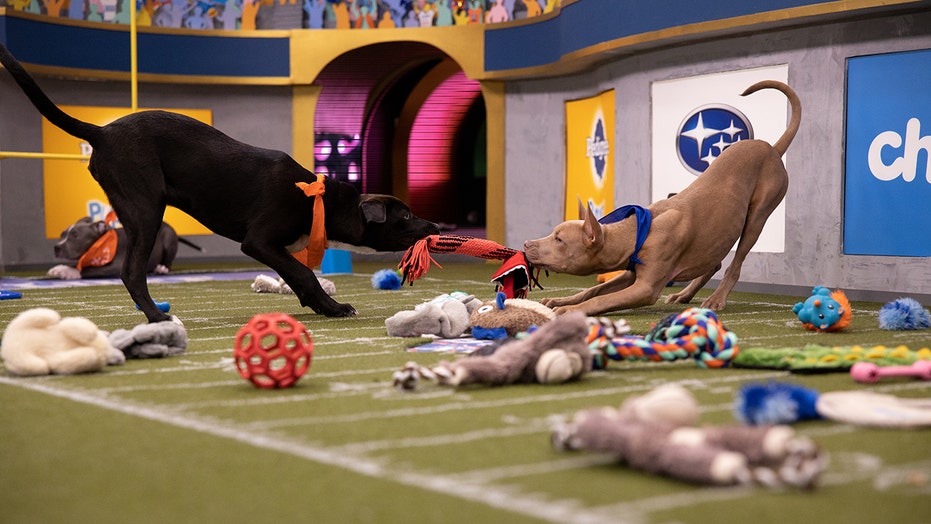 While sports fans far and wide gear up for the 2020 Super Bowl, animal-lovers are just as excited to tune into the 16th annual Puppy Bowl on Animal Planet.

Running on the same day as the big game, Animal Planet’s famous Puppy Bowl, designed to advocate for animal adoption, will kick off and give two teams of adorable pups the opportunity to find glory on the gridiron as well as their potential forever homes.

For those unfamiliar and for eager fans who don’t want to miss a moment of the nail-biting and heart-melting action, below is a rundown of everything one needs to know ahead of Puppy Bowl XVI.

What is the Puppy Bowl?

Every year, Animal Planet takes a crop of adorable young dogs and has them compete by scoring touchdowns with dog-approved toys on the mini gridiron of the Geico Stadium. Essentially, the camera rolls as these dogs wrestle over their toys narrated by heated commentary from the announcers.

While watching cute dogs play is solid entertainment, Animal Planet hopes that viewers who tune in will consider adopting the players. This year, Puppy Bowl XVI will unleash more dog players than ever before in the hopes that the show’s track record of 100 percent post-game adoptions will continue.

Good news for people who love a good dog picture: Animal Planet released the starting lineup of 42 players on its website, so fans can take a peek at their potential favorites while “tail-gating” the show.

While the 49ers and the Chiefs duke it out at the Super Bowl, the Puppy Bowl will feature a bout between Team Ruff and Team Fluff fighting for the Chewy “Lombarky” trophy. In addition to having more dogs than ever before, Puppy Bowl XVI will feature all-new team colors from yellow and green to “Bark Blue” and “Tail Mary Tangerine.”

According to a press release from Animal Planet, many of the puppies come from shelters all across the United States, but this year marks the largest crop of international puppies, with players representing Cartagena, Columbia; St. Croix in the U.S. Virgin Islands; and Toronto, all available for adoption.

There will also be five special needs players up for adoption, including Ferris, a three-legged Labrador Retriever mix; two hearing-impaired pups: Kismet, a Great Dane, and Paprika, a Chihuahua mix; Filbert, a blind and hearing-impaired Shetland Sheepdog mix; and Rooster, an American Staffordshire Terrier/Bulldog mix with a cleft palate.

Are there humans involved?

Dogs will compete at the Puppy Bowl XVI. (Animal Planet)

In addition to the many people making sure that the event is 100 percent safe and humane for all the canine players, the Puppy Bowl will get a dose of star power. Comedian Whitney Cummings, who teamed up with Love Leo Rescue in Los Angeles, will make an appearance. Meanwhile, “Property Brothers” stars Johnathan and Drew Scott will be on hand along with singer Emmylou Harris.

As always, the Puppy Bowl would be nothing without its intrepid announcers. This year, returning for his ninth game as the Puppy Bowl’s “rufferee,” is Dan Schachner. In addition, TV correspondent Jill Rappaport will be part of the action as well. Viewers will be guided on a tour of the puppy’s various preparation activities including a locker room cam. The network notes that viewers can expect slow-motion replays, nose-to-nose action from the iconic water bowl cam and the fan-favorite puppy kiss cam.

Is there a halftime show?

There will be a halftime show at Puppy Bowl XVI. (Animal Planet)

It wouldn’t be a very faithful companion to the Super Bowl if there weren’t a halftime show to look forward to. In what can only be considered an act of unity in the animal community, the Puppy Bowl will feature the Kitty Half-Time Show. Jenni-Purr Lopez and Cat-ira have been tapped to perform a special rendition of “Catnips Don’t Lie!”

Fortunately for those that aren’t necessarily equipped to adopt dogs, the two kitten performers are looking for their forever homes as well.

As if that’s not enough, the Puppy Bowl will feature some cheerleaders in the form of pygmy goats and armadillos, who will be there to root for either Team Ruff or Team Fluff.

The 96 puppies from 61 shelters will take to the gridiron on Feb. 2 at 3 p.m. EST on Animal Planet. Viewers can also watch on the network’s “Go” app at 3 p.m. EST as well. After that, it will be unlocked on the app at 5 p.m., after the two-hour game concludes. Users can also check out Animal Planet’s Facebook, Twitter and Instagram to follow along with the action during the game as well.