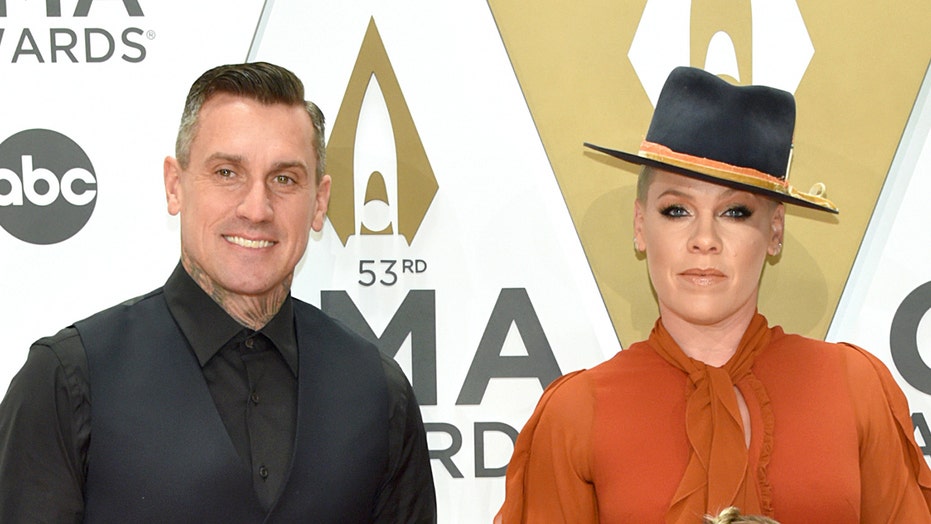 Pink isn’t quite sure when she married her husband, Carey Hart.

The pop superstar revealed to "Entertainment Tonight" on Wednesday at the 2019 CMAs that she and her professional motocross pioneer husband of 13 years aren’t pulling their hair out over a technicality.

Pink told the outlet that she and Hart can’t figure out if their wedding anniversary is on the 6th or 7th of January, though the pair is rumored to have tied the knot at a resort in Costa Rica on Jan. 7, 2006.

While the “Just Give Me a Reason” songstress admitted the two “used to make a big deal out of it,” acknowledged that in these days, they simply aren’t losing sleep over it.

“He deserves a trophy,” Pink said of her whirlwind marriage to Hart, which has seen two separations or “breaks,” despite the pair never officially filing for divorce.

PINK SAYS SHE'S HAD SEVERAL MISCARRIAGES SINCE 17: 'YOU FEEL LIKE YOUR BODY HATES YOU'

The couple also brought along their two children, Willow Hart, 8, and Jameson Hart, 2, for the second time in a week to an award show. On Sunday night, the “So What” singer made it a family affair at the People’s Choice Awards where she accepted the honor for this year’s People’s Champion.

At the CMAs, Pink is slated to perform with Chris Stapleton. She also took a moment to pose on the red carpet with fellow country music icon Sheryl Crow.

The star performers certainly played off of each other’s carpet looks as Crow gleamed in a multi-colored ruby, blue and gold sequin gown and straight blonde hair.

The two women have been at the forefront of women equality in the music business, even responding to Recording Academy boss Neil Portnow after he said it was the responsibility of women to "step up" if they wanted to be successful in the industry.

“Women in music don’t need to ‘step up’. Women have been stepping up since the beginning of time," Pink wrote and shared to Twitter at the time. "Stepping up, and also stepping aside ... When we celebrate and honour the talent and accomplishments of women, and how much women step up every year, against all odds, we show the next generation of women and girls and boys and men what it means to be equal.”

The nine-time Grammy winner Crow wrote: “I wish the Grammys would return to female/male categories. Who will young girls be inspired by to pick up a guitar and rock, when most every category is filled with men? I’m not sure it is about women needing to ‘step up’, (as said by the male in charge).”