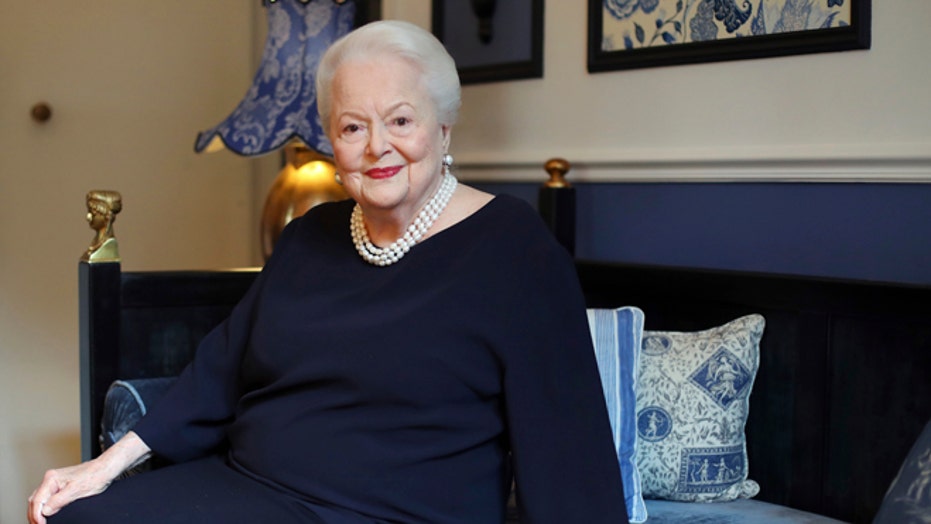 Olivia de Havilland's death Sunday at 104 in Paris has left many of her fans in mourning.

To express their grief, such fans -- some of whom famous themselves -- have taken to social media.

Actor and musician Jared Leto was among the stars paying tribute to the late actress, sharing a handful of photos of her on Twitter, along with a lengthy statement.

"The legendary Olivia De Havilland passed away yesterday. She was 104. Olivia made a powerful impact in my life and I had the pleasure to spend some time with her in Paris," Leto, 48, began. "I thanked her for her bravery and shared how her choices affected me and my brother and gave us opportunities to fight for our creative freedom. She was a class act."

Olivia de Havilland died on Sunday in Paris at the age of 104. She was one of Hollywood's most lauded actresses of the Golden Age. (AP, File)

The Thirty Seconds to Mars frontman explained that he still owned letters de Havilland wrote him "on beautiful blue stationary."

He then shared an excerpt from an interview he gave, in which he recounted utilizing de Havilland's historical legal win over Warner Bros. in the 1940s, freeing not only herself but all actors from years-long contracts tying them to production companies.

Leto was able to cite the law in a dispute with his record company.

"It is called the De Havilland Law and was put into place thanks to the bravery of Olivia De Havilland in the 1940s. I ended up meeting with her in Paris, and we had a wonderful time together," he recalled. "I got to thank her for fighting the system back then so I could battle it now. It was amazing to meet her – she's a legend..."

Olivia de Havilland was nominated for an Oscar for her supporting role in "Gone With the Wind." (Donaldson Collection/Michael Ochs Archives/Getty Images, File)

Antonio Banderas also expressed his grief online, sharing two images of de Havilland from the film "Gone with the Wind," of which de Havilland was the last star still alive.

"#OliviadeHavilland, a great icon of cinematography, has passed away," he wrote. "RIP."

Golden Globe-nominated actress Morgan Fairchild shared a photo of herself standing with the late actress and Roddy McDowall.

"So sorry to lose #oliviadehavilland (here w my great friend Roddy McDowall) We attended the same events many times," she wrote. "I was once seated between her and Robert Mitchum. What stories! A lovely lady and great actress. Always so gracious!"

Outside of her showbiz colleagues, may of the "Heiress" star's fans shared their thoughts online as well.

Olivia de Havilland was played by Catherin Zeta-Jones in Ryan Murphy's FX show, "Feud." She filed a suit against FX networks saying her likeness was illegally used. Ultimately, the case was thrown out. (AP, File)

"RIP, Olivia de Havilland. Spunky ingenue, femme fatale, daffy screwball queen, soul-bearing melodrama heroine, sinister grande dame," one fan wrote. "She did it all, with grace and authenticity. An actress of fierce courage, onscreen and off."

"I'll always be in awe of how persistent and fearless Olivia de Havilland was," another wrote. "She changed the game forever and did it with grace. We've all been so lucky to receive her performances. Thank you Dame de Havilland — what a wonderful life to celebrate."

"Rest in peace, Olivia de Havilland, who died peacefully in her home in Paris at the age of 104," another said, sharing two photos: one of the actress riding a bike as a young woman, and another showing her biking in her later years. "De Havilland was still cycling in her 100s!"