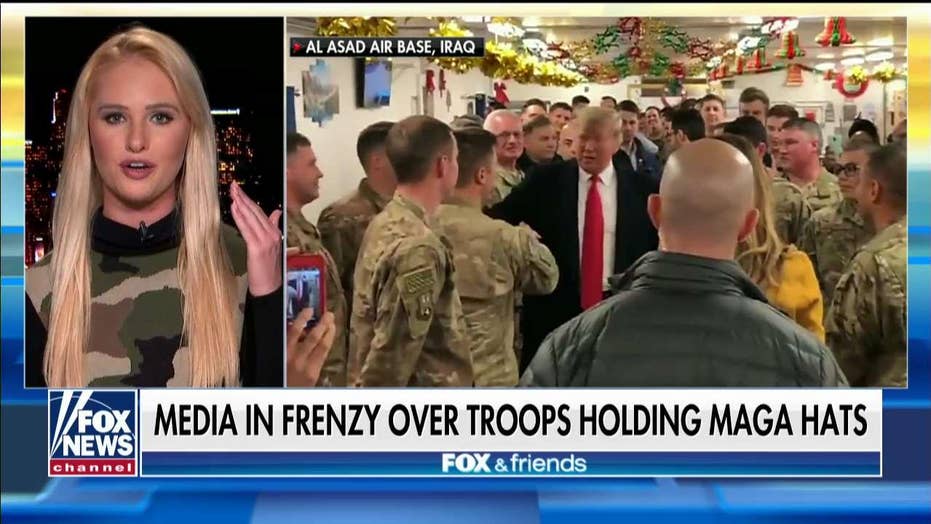 NBC News attempted to backtrack on an article published Wednesday which claimed President Donald Trump did not visit the troops over Christmastime when in fact, he did.

The liberal news outlet admitted in an extended editor's note that "the thrust of this article is no longer correct." NBC also adjusted the headline to: "Trump becomes first president since 2002 not to visit troops on or before Christmas." The president and first lady left Wednesday night to visit the troops on Thursday.

The note which was published at the top of the original article read: "On Wednesday, NBC News compiled a list of every Christmastime visit to active troops by a president since 2001. That list, as detailed in the article below, showed that former Presidents George W. Bush and Barack Obama visited troops on or before Christmas every year since 2003, and President Donald Trump did so in 2017.

"As of the end of Christmas Day 2018, Trump had not visited troops during the holiday season, and had announced no plans to do so. The article was correct, but on Dec. 26, the situation changed. Trump and the first lady, Melania Trump, made an unannounced visit to troops in Iraq. As a result, the thrust of this article is no longer correct, even if it was at the time."

The note continued: "In the interest of transparency, we are keeping the article on NBCNews.com so that the record will reflect the situation on the day the article was published, and are directing readers to the article about Trump’s Iraq visit here. We are also altering one line in the article, as well as the headline, to be more specific and to note that Trump was the first president since 2002 who didn’t visit military personnel on or before Christmas, rather than at Christmastime."

NBC News' mistake comes after Trump's visit to Iraq was heavily criticized by the media. CNN's overwhelmingly negative reporting drew attention to some troops bringing MAGA hats for the president to sign and how this may be against the guidelines, which forbids active members of the military from participating in “political activities.”

The story by CNN politics reporter Eli Watkins, headlined “Troops bringing Trump hats to sign may violate military rule,” was criticized by press secretary Sanders, among others, who fired back at CNN on Thursday, tweeting that the network “will attack anyone who supports President Trump, including the brave men and women of our military who fight everyday to protect our freedom.”

CNN anchor Don Lemon also took shots at Trump for visiting the troops while the U.S. Coast Guard continues to work without pay during the partial government shutdown and later referred to Trump as “The Grinch” for making Christmas about him as well as his visit with the troops. Former NSA adviser Samantha Vinograd agreed, saying the president “should’ve stayed home.”

Later on, CNN’s April Ryan said Trump’s visit with the troops “should have happened a long time ago” and questioned whether everyone “should be commending him” for something presidents have done in the past.