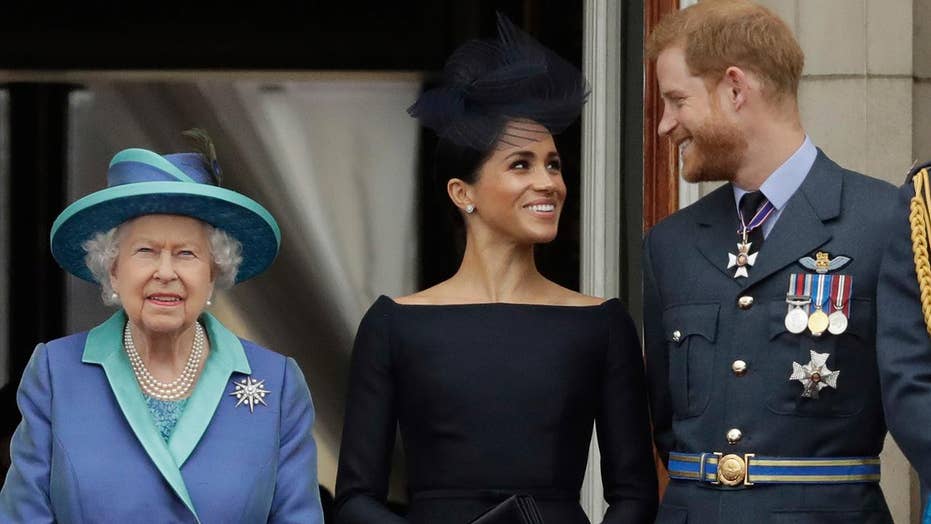 The claim is being made in the bombshell book “Finding Freedom,” written by royal reporters Omid Scobie and Carolyn Durand. Numerous palace insiders came forward to the two journalists and detailed what led to the Duke and Duchess of Sussex’s departure as senior members of the British royal family.

The couple currently resides in Markle’s native Los Angeles with their son, Archie.

On Tuesday, the U.K.’s DailyMail reported the reigning monarch, 94, originally had confidence in the 39-year-old when they embarked on their first engagement together on June 14, 2018.

In this Tuesday, July 10, 2018, file photo Britain's Queen Elizabeth II, Meghan the Duchess of Sussex and Prince Harry watch a flypast of Royal Air Force aircraft pass over Buckingham Palace in London. As part of a surprise announcement distancing themselves from the British royal family, Prince Harry and his wife Meghan declared they will “work to become financially independent." (AP Photo/Matt Dunham)

“The queen was wonderful, warm and generous towards the new duchess,” Durand wrote, as quoted by the outlet. “She made sure Meghan knew what was going on and made her feel very much at home because it was her first trip.”

Elizabeth even gifted Markle a pair of pearl and diamond earrings before they stepped off the train in Chester together.

As for Markle, she was reportedly eager to learn the ins and outs of royal life to impress her husband’s grandmother.

“Meghan, an avid learner studying all she could on royal protocol, was often seen carrying binders full of research so she didn’t put a foot wrong,” Durand wrote. “She took her new role incredibly seriously. That day was different though; she was getting a royal master class in training from the queen herself.”

Harry’s father, Prince Charles, also reportedly welcomed Markle with open arms. A friend of the Prince of Wales said the 71-year-old had “taken a real shine to Meghan.”

“She’s a sassy, confident, beautiful American,” said the pal. “[Charles] likes very strong, confident women. She’s bright, and she’s self-aware, and I can see why they’ve struck up a very quick friendship… Meghan ticks the boxes. Most of all she’s married to his beloved.”

A trusted confidant also revealed Markle “found such a supportive and loving father in Charles, which has really changed her life for the better.”

According to the book, Markle even underwent SAS training after being sent “absolutely terrifying and stomach-churning” threats when she joined the British royal family. The Duchess of Sussex reportedly participated in a mock kidnapping and was taught how to establish a relationship with her abductors as well as being “saved” from a hostage situation, which involved officers firing fake guns.

A source told the authors that Markle found the experience “extremely intense and scary.” But senior members of the royal family, including Charles and Prince William, have undergone the training.

MEGHAN MARKLE WAS ‘EMOTIONAL’ AFTER GETTING IN TROUBLE FOR WEARING NECKLACE WITH PRINCE HARRY’S INITIAL: BOOK

In a statement sent to Fox News, the book publisher said Scobie is a London-based writer, royal editor for Harper’s Bazaar, an ABC News contributor, “Good Morning America” regular and host of ABC’s popular royal podcast, “The Heir Pod.” Durand is an Emmy Award-winning producer and writer who has spent nearly two decades working in London covering Buckingham Palace, Kensington Palace, Clarence House and other major international events. During that time, she produced multiple interviews with members of the royal family including Harry. She contributes to O, The Oprah Magazine, Elle magazine and other American and British news outlets.

“Finding Freedom" is available in bookstores and online.