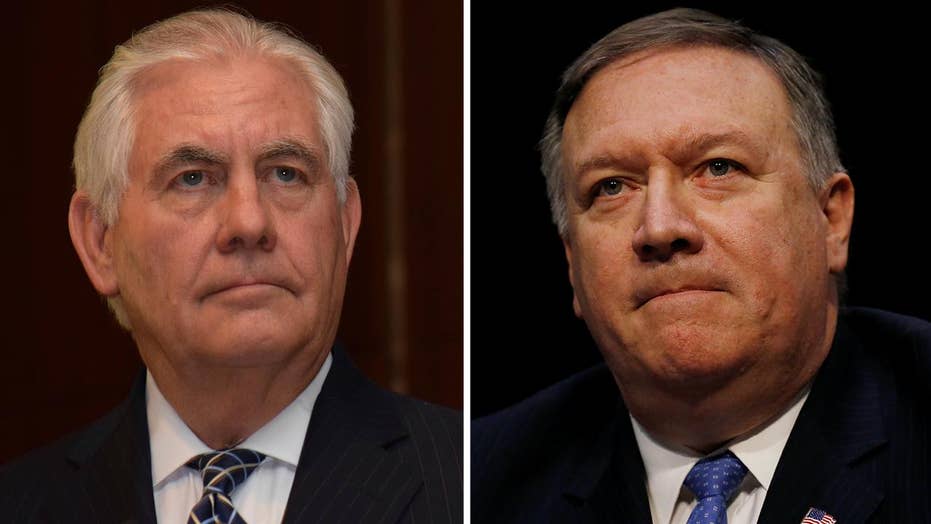 Rex Tillerson is out as secretary of state. Jonathan Swan of Axios provides insight into Pompeo's nomination.

Late-night talk show hosts had a field day with the news of President Trump's firing of Secretary of State Rex Tillerson.

The president made headlines on Tuesday morning when he announced via Twitter that Mike Pompeo, director of the CIA, would replace Tillerson.

"We disagreed on things," Trump told White House reporters after the news broke. "I think Rex will be much happier now."

Late-night hosts used the news as an excuse to poke fun at Trump.

On "Late Night With Seth Meyers," the host said the news of Tillerson's firing was announced via Twitter, but joked that it was "technically a retweet,” then displayed an image of a fake tweet written by Russian President Vladimir Putin that said, “You’re Fired, Rex."

Later on, Meyers added, "Even when you get fired from Domino's, the manager takes you into that crappy little office and tells you to your face," he started. "Tweets are for finding out which band is in town or which airline was mean to Chrissy Teigen.”

On "The Late Show," Stephen Colbert made fun of the news in his show's opening monologue by highlighting the ending line of Trump's now infamous tweet, "Congratulations to all."

"Wait, congratulations to all? 'Congratulations Rex, you've won an all-expenses paid trip to beautiful --- get the f--- out of here,'" Colbert said. "As a parting gift we got you this beautiful door, which we hope does not hit you on the ass."

The host went on to slam the president's personal life.

"It's too bad Twitter wasn't around when Trump ended his first two marriages," Colbert said. "Back then he had to do it by fax."

The show then cut to an image of a fax machine printing a paper with the words "Sorry, you're a seven at best."

And on "Jimmy Kimmel Live," the 2018 Oscar host took a different approach and said that it was odd to him that Trump used a tweet to fire Tillerson when he has had so much past experience of firing people in person on "The Apprentice."

"Donald Trump spent more time firing Lil Jon than he did firing the secretary of state," Kimmel joked. "I’m starting to think he fires people — just so he can get a piece of going-away cake at the party."