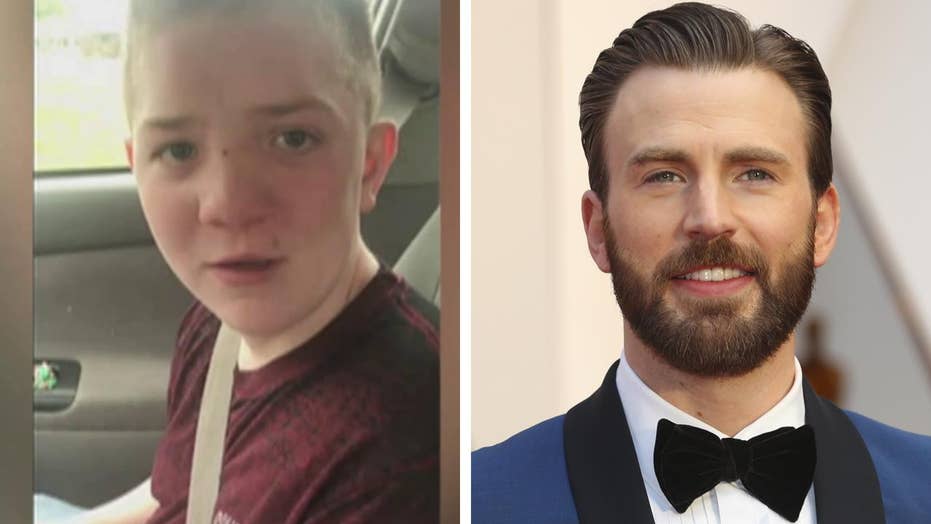 A Tennessee woman's video of her son's tearful recounting of being bullied at middle school has prompted a wave of support from athletes and entertainers. One star is even going as far as to reward the young boy in a big way.

Kimberly Jones said in a Facebook post Friday she had just picked up her son, Keaton, from school because he was too afraid to go to lunch.

The video of Keaton had more than 18 million views as of Sunday, and a crowdsourcing page for his future education has raised more than $29,000.

The post has gone so viral that celebrities far and wide are taking notice and offering their support to young Keaton. However, one star is going above and beyond to reward the young boy for his persevearance. Chris Evans, who will  reprise his role as Captain America in the upcoming "Avengers: Infinity War," took to Twitter to not only share his support, but to invite the young boy to Los Angeles for the film's premiere.

"Stay strong, Keaton. Don't let them make you turn cold. I promise it gets better," the star wrote. "While those punks at your school are deciding what kind of people they want to be in this world, how would you and your mom like to come to the Avengers premiere in LA next year?"

While Evans offer of a real red carpet premiere is, arguably, one of the best gifts that stars are hoping to bestow upon Keaton, it's hardly the only one.

"If he takes you up on your offer to see UFC Headquarters, I would be honored to host him and his family at our place if they need somewhere to stay," Donald Trump Jr. added.

Country music star Kelsea Ballerini tweeted that the next time she comes home to her native Knoxville, she wants to be with Keaton to witness the bullies apologize.

Retired race car driver Dale Earnhardt Jr. said on Twitter he wants Keaton to "add me to your long list of friends," and Snoop Dogg said on Instagram that Keaton "has a friend for life" and that "love is the only way to beat hate."

In the video, Keaton said other students call him ugly, make fun of his nose and tell him he has no friends. He said milk was poured on him and ham was put down his clothes.

"Just out of curiosity, why do they bully?" Keaton said. "What's the point of it? Why do they find joy in taking innocent people and find a way to be mean to them? It's not OK.

"People that are different don't need to be criticized about it. It's not their fault. If you are made fun of, just don't let it bother you."

"We all know how it feels to want to belong," Jones said in her post, "but only a select few know how it really feels not to belong anywhere."

An account that appears to be linked to the Jones family seems to have taken Evans up on his offer. However, there's no official word on what, if any, of the celebrity offers Keaton's family will accept.