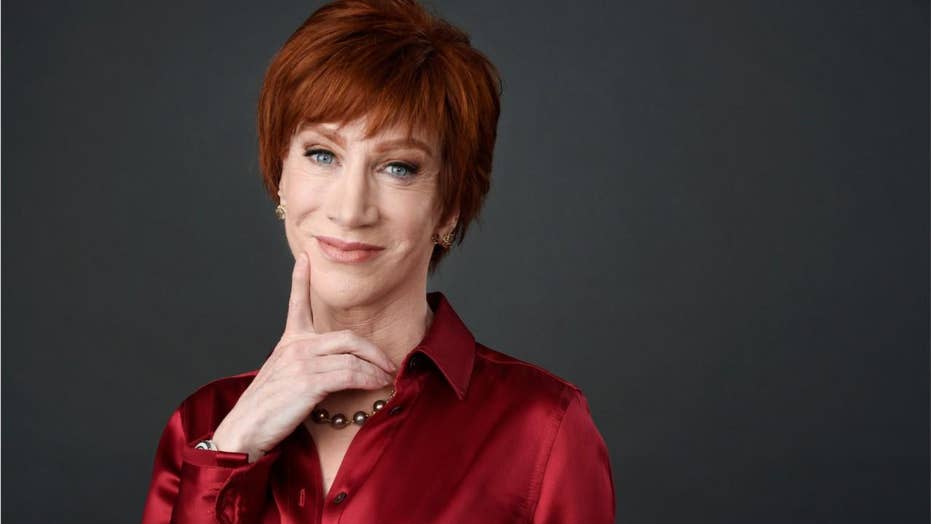 Comedian Kathy Griffin claims she is on a 'kill List'

Comedian Kathy Griffin tweeted a claim that she was put on a 'kill list.'

Kathy Griffin is still harping about the 2017 photo she took posing with a fake severed head of President Trump.

Speaking to The Associated Press, Griffin maintained that she did nothing wrong in holding up the fake bloodied head and explained she has no intention of ever apologizing for the photo, even though she says some people still believe her to be a member of ISIS.

The 58-year-old comedian, actress and writer said she was unable to land work due to the backlash she had received and said she knew the moment would be regarded as “an important, historic story,” thus she decided to film her life journey in the aftermath as a way to tell her story the way she intended.

"I kept saying, 'I think this is an important, historic story,'" Griffin said. "The President and the Department of Justice shouldn't make you unemployable and uninsurable."

Griffin explained that she began filming her everyday life using just her iPhone – no production crew, glam squad or shooting clearances. The lack of work, Griffin claims to have lost out on, forced her into this position of becoming a guerilla filmmaker from which, “Kathy Griffin: A Hell of a Story,” was derived.

The feature film -- completely bankrolled by Griffin herself -- is part documentary, part comedy special, according to the “Suddenly Susan” alum. Griffin said she initially made attempts to sell it as a stand-alone comedy special, but “nobody would even look at it.”

This July 16, 2019 photo shows Kathy Griffin posing for a portrait in New York to promote her film "Kathy Griffin: A Hell of a Story," in select theaters for one day only on July 31. (Photo by Matt Licari/Invision/AP)

Griffin even carried around a film poster she created to bring along with her to various press days for her project, which is slated to be shown on July 31 in 700 U.S. theaters after Fathom Events picked it up following the film’s positive showing at SXSW earlier this year.

"Look, I made it at Kinkos, OK? I'm still on the D-list," Griffin joked, referencing the Bravo reality series, “My Life on the D-List,” which ran for six seasons and earned her two Emmy Awards.

What happens next is anyone's guess — Griffin just knows she will keep hustling and she's not giving up.

"I just want people to know you don't have to go down. You can take a few punches, but after I kick the bucket, I want somebody to go, 'You know that crazy red head? They got her but she didn't go down.'" 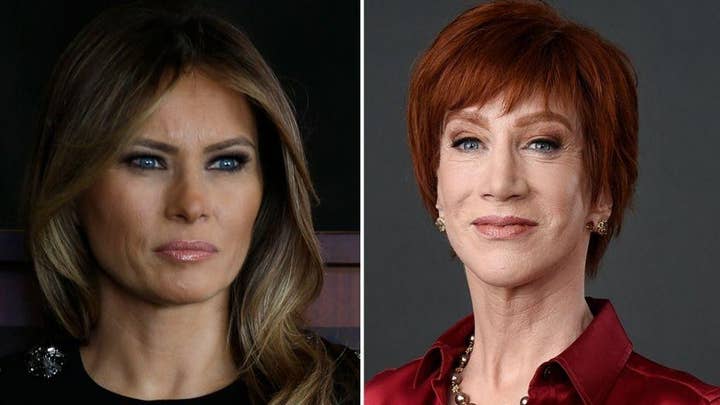 If you miss one of the showings on July 31, Griffin is the first to admit she doesn't know how fans can see it next. She's hoping it gets picked up somewhere and she'd like to see it available internationally as well, teaching as much about Griffin as Trump.

"Now that I've traveled the world with this story, I know that there's a genuine interest in, 'Who's this guy, what's his deal, how does he operate?'"

ANDY COHEN ACCUSES KATHY GRIFFIN OF LYING ABOUT HIM AFTER 'DOG' COMMENT: 'I HOPE SHE FINDS SOME PEACE'

She's learned to fend for herself by financing her own shows, learning about promotions and ad buys and even coordinating the concession and ushers. "It was harder, but it sure kept me busy," said Griffin.

She also had to buy metal detectors because "there were all kinds of incidents. A guy came at me with a knife in Houston," she said.

This July 16, 2019 photo shows Kathy Griffin posing for a portrait in New York to promote her film "Kathy Griffin: A Hell of a Story," in select theaters for one day only on July 31. (Photo by Matt Licari/Invision/AP)

KATHY GRIFFIN NO LONGER FRIENDS WITH ELLEN DEGENERES: 'I AM APPARENTLY NOT HER CUP OF TEA'

In a recent interview, Griffin said there was very little hope of her ever reconciling with her friend and New Years Eve co-host, Cooper, who Griffin has been at odds with ever since she posed with the fake severed head of Trump. Cooper decried the image publicly, which Griffin took issue with given that he didn't reach out to her privately first.

Griffin has previously explained that she doesn’t think Cooper will ever apologize to her and has said in the past that she no longer considers him a friend.

The comedian also pulled no punches in the interview when discussing her old boss, Andy Cohen.

“Andy Cohen treated me like a dog. He was one of the worst bosses I’ve ever had,” she said. “The guy decides the entire slate at Bravo and he gave himself a talk show that magically gets renewed every year.”

Fox News’ Tyler McCarthy and the Associated Press contributed to this report.