Juan William's joins The Next Revolution to discuss the controversial visit between Kanye West and President Donald Trump.

Kanye West is throwing a literal hat into the political arena once again, this time designing a line of T-shirts and hats for a campaign dedicated to urging black voters to break away from the Democratic Party.

The rapper and fashion mogul has designed a series of clothing merchandise supporting “Blexit,” which seeks to not only convince black voters to change parties but shows the stories of those who have already left. The designs were shown Saturday at the Turning Point USA’s Young Black Leadership Summit, an event meant to bring together conservatives in the black community. 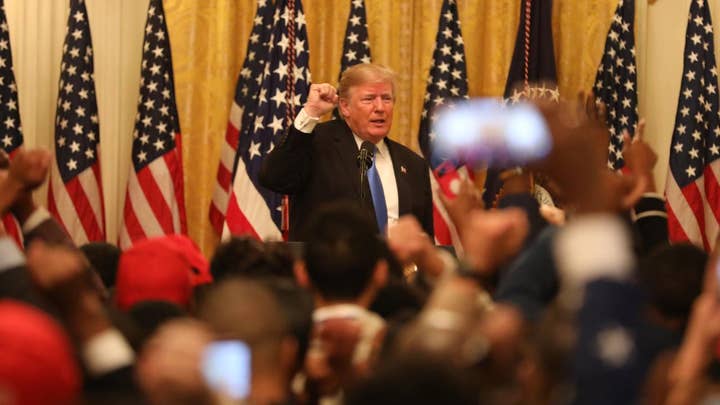 “Blexit is a renaissance and I am blessed to say that this logo, these colors, were created by my dear friend and fellow superhero Kanye West,” said Owens via Page Six. “[West] has taken one of the boldest steps in America to open a conversation we have needed to have.”

The shirts come in a variety of styles and colors and run between $25 and $28. The hats are only in one color but sport two different designs. Each sports either the phrase "Blexit" or "We Free."

Kanye West designed a series of shirts and hats for 'Blexit,' an organization that seeks to break black voters away from the Democratic Party. (Blexit.com)

West made headlines earlier this month when he met with Donald Trump at the White House for a long, rambling rant about the state of the country and a great many other topics.

He has previously declared his support for Donald Trump and has been seen sporting a “Make America Great Again” hat on several occasions, including his recent appearance on “Saturday Night Live.”