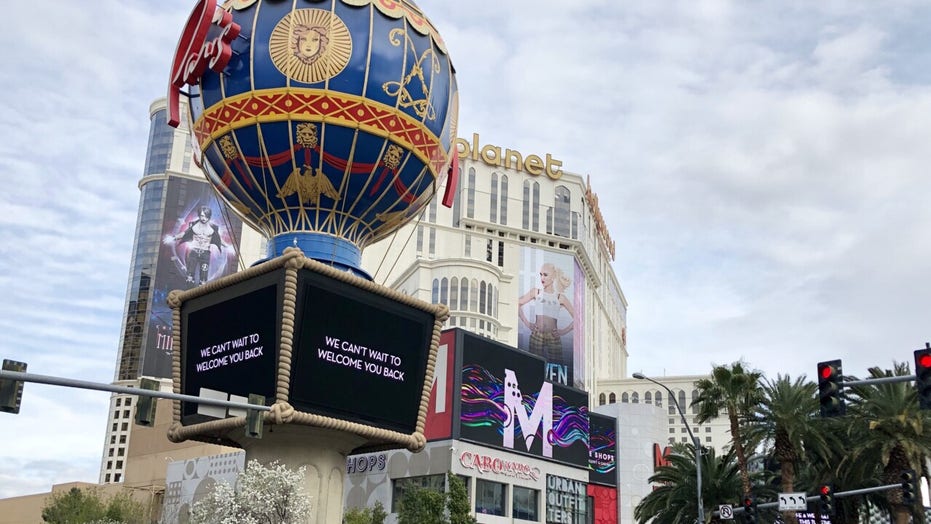 Longtime Las Vegas headliner Criss Angel reflects on the unprecedented decision to close the Strip amid the coronavirus pandemic and the new reality ahead.

LAS VEGAS – People walking the Strip on a brisk Friday evening took a moment to stop and listen to an unfamiliar sound that has in recent days enveloped Las Vegas and may never come again: silence.

It’s been roughly a week since the world-famous casinos began shutting down one by one in an effort to help slow the spread of COVID-19, turning a city usually teeming with life and buzzing with neon into a ghost town.

“Everybody has that same sense of, you know, shock and awe,” longtime Vegas headliner and illusionist Criss Angel told Fox News. “You know, Las Vegas is the entertainment capital of the world -- it's the adult playground, right? It's open 24 hours a day, seven days a week, 12 months a year and to think in my lifetime that Las Vegas would be closed just for one day would be a crazy thought at best, but they think it could be closed for who knows, is a new reality.”

Outside the Bellagio where hundreds of people would normally be lined up to watch the fountains. (Ben Brown / Fox News)

Nevada Gov. Steve Sisolak on Friday announced a mandatory shutdown of all “nonessential” businesses for 30 days with those that do not comply subject to penalties and fines.

Twenty other states that have implemented similar lockdown measures, with Wisconsin expected to make an announcement Tuesday, according to reporting from The Wall Street Journal and Associated Press.

In the second week of March, unemployment filings in Nevada nearly tripled to 6,356 amid closures stemming from COVID-19, the highest percentage increase since 1987, the Reno Gazette Journal reported, citing the Nevada Department of Employment, Training and Rehabilitation.

“The 30-day shutdown, I can’t imagine that’s going to be the extent of it -- I think it’s going to be at least three months and people are saying even longer than that, but the longer it is the deeper the problem,” Dr. Stephen Miller, professor and director of UNLV’s Center for Business and Economic Research, told Fox News. “I’d say that probably compared to a lot of other metro areas in the United States southern Nevada will be hit pretty hard.”

All casinos on the Vegas Strip have been shut down to help slow the spread of COVID-19. (Ben Brown / Fox News)

Roughly 206,000 casino employees in Nevada are out of a job following the order from Sisolak, the Reno Gazette Journal reported, citing data from the American Gaming Association.

Angel employs 60 to 100 people and had to make the difficult decision to suspend his show, "Mind Freak" at Planet Hollywood.

“It was a very, very difficult thing to do, one that I had no choice and one that I thought long and hard about,” Angel said, adding that he was able to pay his employees through an extended period of time and keep health benefits in place.

One in every four workers in Nevada are employed in the leisure and hospitality industry, injecting about $68 billion into the state’s economy, according to the Nevada Resort Association.

It’s been over 50 years since casinos on the Strip closed down for John F. Kennedy’s funeral on Nov. 25, 1963, but this is the first time that all Nevada casinos statewide have been ordered to shut down, Michael Green, a history professor at the University of Nevada, Las Vegas, told the AP.

And while things at the moment might look bleak, “it’s not the end of the world,” says Angel.

“We're gonna get through this. There might be financial challenges, there might be challenges about what's going to happen tomorrow. But, if we just appreciate and live in this moment we can make the most of it,” Angel told Fox News. “And, I think that's really important because a positive, optimistic attitude is good.”

The world-famous illusionist also hopes the country walks away from this pandemic with valuable lessons for the future.

TRUMP CALLS FOR RE-OPENING ECONOMY BY EASTER: ‘WE HAVE TO GET BACK TO WORK’

During a recent visit to a hospital so his son could undergo treatment for leukemia, Angel learned about a drug shortage that highlighted the global pandemic and something he hopes the country can learn from moving forward.

“I went into the hospital with my son, my son has had a relapse of leukemia, and they told me that certain things that kids needed weren't available because we rely so much – 97 percent of our drugs and a lot of our pharmaceutical products come from China -- and I just couldn't believe this. I think that we need to be self-reliant,” Angel said. “Hopefully a situation like this with this pandemic will allow us to be smarter as we go into the future and other countries as well, to really take care of our own people and be prepared.”

An entrance to the Bellagio is boarded up. (Ben Brown / Fox News)

Roughly 97 percent of U.S. antibiotics are supplied from Chinese pharmaceutical companies, and more than 90 percent of vitamin C, as well as 95 percent of ibuprofen, 91 percent of hydrocortisone and 70 percent of acetaminophen, according to Yanzhong Huang, a senior fellow for global health at the Council on Foreign Relations, citing data from the U.S. Commerce Department.

While President Donald Trump has received mix praise and criticism for his handling of COVID-19, Angel underscored the importance of taking this epidemic “very seriously” and the “need to come together, politics aside, and do what's right for our fellow human beings.”