Sean Hannity commutes to set via scooter in Vietnam

Hosting a show outside of the confines of a New York City studio can be challenging and Fox News host Sean Hannity was reminded firsthand as he was forced to navigate Tuesday morning traffic in Hanoi, Vietnam, on the back of a scooter.

“We’re not making this up, I hopped on a scooter with some other staff of mine,” Hannity told his audience to start his Fox News show. “Needless to say it was interesting, chaotic and kind of fun.”

After waiting in traffic for 45 minutes, Hannity and his staff, fearing they would be late for their own live show, decided to try “plan B” and navigate through traffic on scooters. 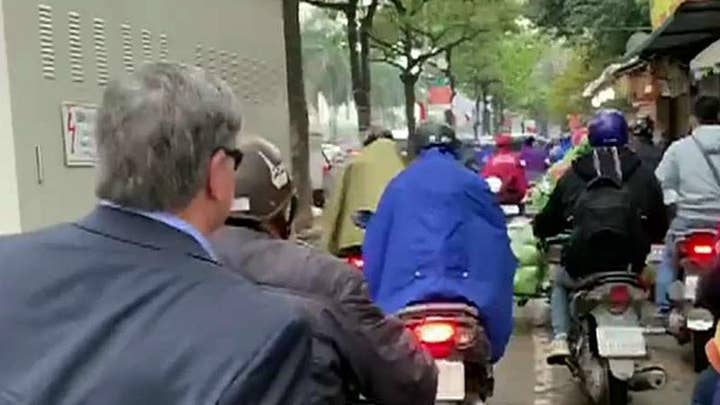 The show played video of the host wearing his trademark blazer and jeans on the back of a scooter with some of his staff also riding on scooters in Hanoi.

“And, by the way, we were riding on the sidewalk there, in case you were interested,” Hannity said following a video clip.

Later in the show, Hannity played more video showing the host throwing a “thumbs up” to the camera and wearing sunglasses.

“The only way to travel. This is it right here,” Hannity said while sitting on the scooter as the driver smiled. “Otherwise we wouldn’t make the show tonight.”