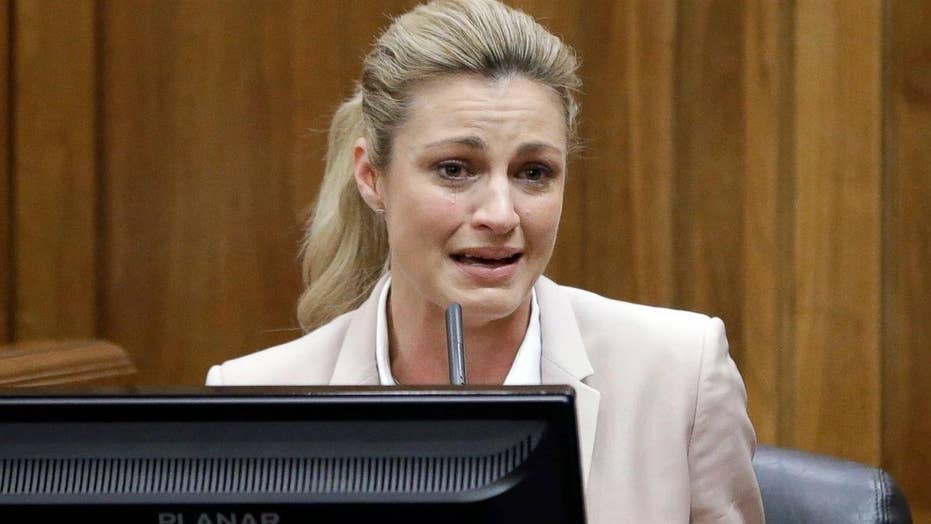 NASHVILLE, Tenn. – Defense lawyers on Wednesday continued to try to poke holes into the claim by sportscaster Erin Andrews that two hotel companies should share the blame for a stalker taking nude videos of the TV host and posting them on the Internet.

The defense also presented testimony disputing that Andrews has suffered severe and permanent emotional damage as a result of the videos.

Meanwhile, a TMZ report Thursday claimed a Marriott executive had showed a nude video of Andrews to friends on Tuesday and lawyers for the sportscaster were eager to have the exec take the stand.

On Wednesday, a hotel security expert testified that Michael David Barrett was a determined criminal and the staff of the hotel where the video was taken didn't violate any safety standards.

Barrett was sentenced to 2 ½ years in prison after he admitted to stalking Andrews in three cities and altering hotel room peepholes to shoot nude videos of her in Nashville and Columbus, Ohio.

Barrett, in videotaped testimony played before the jury this week, said he would alter the peepholes in such a way that he could pull them out of the door and then place his cellphone camera up to the open hole to take video. He admitted to doing this to about 10 other women in the testimony.

Andrews has filed a $75 million lawsuit against the stalker and both the owner and operator of the Nashville Marriott at Vanderbilt. The hotel is a franchise and was owned by West End Hotel Partners and managed by Windsor Capital Group when the video was shot at the hotel in September 2008.

The sportscaster has maintained that the hotel honored a request by Barrett to be placed in a hotel room next to hers but never told her that he had made the request. She has testified that she would have called the police had she known he wanted to be near her.

The defense disputes this, saying Barrett, who used to be an insurance executive who traveled extensively, schemed his way into getting an adjacent room.

Stephen Barth, a professor at the Conrad N. Hilton College of Hotel and Restaurant Management at the University of Houston, testified that his review of the case showed no evidence that the hotel staff gave the stalker Andrews' room number or intentionally placed him in a room adjacent to the sportscaster.

Andrews has said that she doesn't think she will ever get over what happened to her. She testified that she has been depressed and extremely fearful.

But testimony from Dr. Kim Brown of Vanderbilt said Andrews is managing fairly well despite what happened.

"She is a very resilient individual who has a good background and good coping skills," Brown testified.

In the meantime, ESPN, the network that Andrews was working for when she was stalked, is defending itself after she testified this week that her bosses made her do a media interview after the story broke that there were nude videos of her online. Before Barrett's arrest in October 2009, some were suggesting Andrews did it as a publicity stunt — something she has said caused her an enormous amount of grief.

"Developments in the case have been interpreted by some to mean that ESPN was unsupportive of Erin in the aftermath of her ordeal," Josh Krulewitz, a spokesman for the network, said in a statement. "Nothing could be further from the truth. We have been and continue to be supportive of Erin."