Top Talkers: Former basketball star Dennis Rodman says perhaps he should be the next U.S. ambassador to the United Nations after Nikki Haley resigns.

Dennis Rodman is being ensnared for his alleged involvement in a Tuesday afternoon clothing heist at a yoga studio, according to a new report.

The theft allegedly took place after the NBA Hall of Fame legend showed up to VIBES Hot Yoga in affluent Newport Beach, Calif., around 12:35 p.m. with three other people – two women and a man.

In the surveillance video provided to Fox News by TMZ Sports, Rodman and one of the women can be seen perusing items in the reception area of the popular yoga establishment before the woman begins to remove a garment from one of the racks. The woman then walks directly behind Rodman, who appears to shield her from a receptionist sitting behind a large desk, while she stashes the goods in her purse.

DENNIS RODMAN: TRUMP NEARS 'BIG, BEAUTIFUL DEAL' WITH KIM, AND NOBEL PEACE PRIZE COULD BE NEXT

Minutes later, a male companion of Rodman and another woman also walk into the business and the man in question picks up a large crystal art piece from the reception desk and tries to place it on a steel dolly, allegedly intending to buy it, TMZ reported.

However, the man dropped the crystal – shattering it on the floor – just as the woman in the green shirt was seen grabbing another article of clothing and shoving it into her purse. 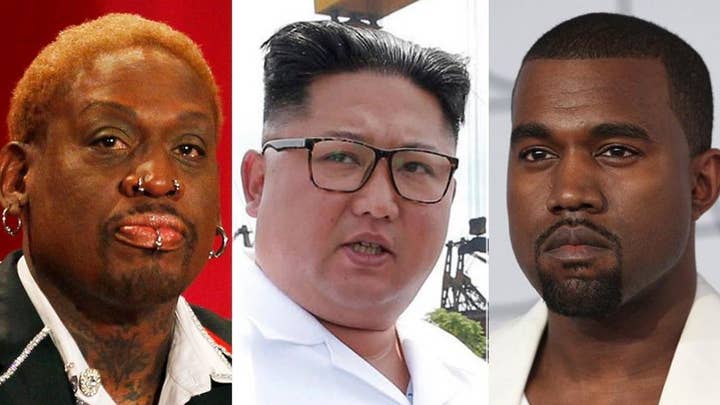 The video then shows the woman in the green shirt, Rodman, 57, and the man – with the steel dolly in tow – leaving the upscale yoga studio moments apart. On his way out, Rodman appears to be talking to someone as he points to something on the floor.

According to TMZ, the owner of the business said employees working at the time recalled everyone in Rodman’s group smelling of alcohol.

Reps for Rodman did not immediately respond to Fox News’ request for comment. However, an attorney for the flamboyant hustle player declined to comment to TMZ, saying, “it’s premature.”

The group allegedly made off with more than $500 in merchandise during the brazen heist, in addition to breaking the $2,500 crystal.

Fox News has confirmed that the owner of the studio has filed a police report with Newport Beach Police who have declined to comment on the matter.

Rodman has been serving probation stemming from a January 2018 DUI arrest in which he blew over the .08 legal limit, TMZ reported at the time.