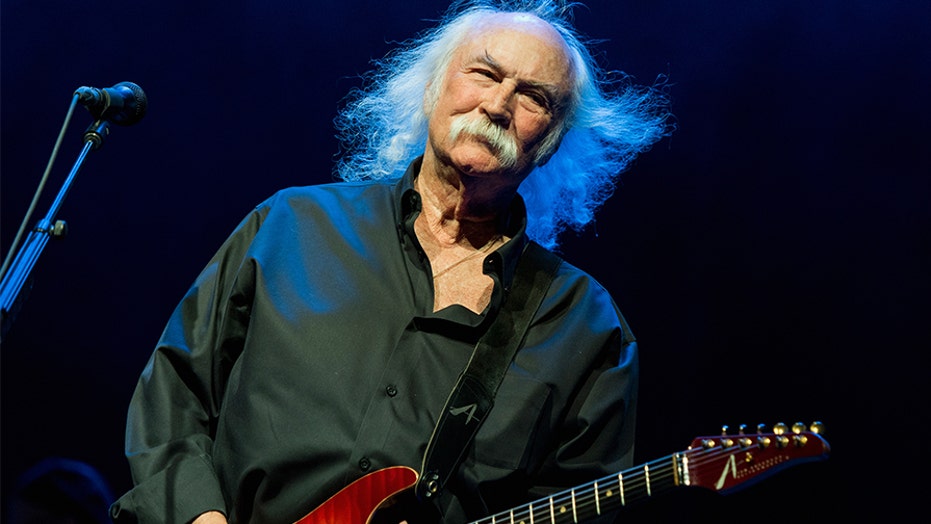 Crosby, who recently recounted his “checkered” history in vivid detail for the documentary “Remember My Name,” described how Mitchell, 75, broke up with him.

David Crosby holding Joni Mitchell while both are seated at an upright piano, seen from the back, through the control room window at the recording studio. — Getty

“‘That Song About the Midway’ — it was her goodbye song to me,” the founding member of the The Byrds and Crosby, Stills, Nash & Young told the outlet about how Mitchell played the track for him. “The look on her face when she finished singing the song, looking right at me, and then she started and sang it again… Yeah, that was a very definite message there. She’s quite a lady.”

According to the New York Post, Mitchell began dating Crosby around 1967 and he produced her debut album. Music journalist David Browne shared in his book “Crosby, Stills, Nash & Young: The Wild, Definitive Saga of Rock’s Greatest Supergroup,” that Crosby would reportedly "revel in presenting her to his friends, treating her like a prized, talented possession.”

The outlet shared Mitchell later told biographer David Yaffe, “It was kind of embarrassing… as if I were his discovery.”

As the relationship crumbled, Crosby reportedly took up with an old girlfriend. When Mitchell found out, she made her disappointment known to Crosby and others at a party at Monkee Peter Tork’s house in the one way she knew best.

It was then when Mitchell played the “That Song About the Midway,” which had “references to a man’s sky-high harmonies and the way she had caught him cheating on her more than once,” Browne wrote. “There was no question about the subject of the song.”

“It was a very ‘Goodbye David’ song,” added Crosby. “She sang it while looking right at me, like, ‘Did you get it? I’m really mad at you.’ And then she sang it again. Just to make sure.”

Mitchell went on to date Crosby’s bandmate Graham Nash — but Crosby insisted there are no hard feelings today.

“I do see her and talk to her,” Crosby told the New York Post in July of this year. "Our relationship has always been thorny but good.”

Closer Weekly shared Crosby ultimately had falling outs with Stephen Stills, Graham Nash and Neil Young. However, he stressed the documentary “Remember My Name” was far from an olive branch to them.

“No, definitely not,” he said. “I think all of us were horrible to each other many, many times. And we probably should all apologize to each other repeatedly.”

“Some people read it that way,” he continued. “I’m not really … I’ve already apologized to those guys for most of the things that I think I should have apologized for — the biggest one, of course, being me turning myself into a junkie. That was the worst thing I did to any of them. But I don’t think there’s an entity there to apologize to. That band is history. It’s done. We did good work. I’m proud of it and I’m doing what I’m doing now. I’ve got no bad stuff in my heart for any of those guys. They’re all OK and I wish them well. I want them to have good lives.”

Crosby said that today he’s proud of his children.

“Erika has three kids, lives in Florida and is an incredibly smart, wonderful woman who I visit regularly because I love her dearly,” he said. “Donovan doesn’t really talk to me. Django lives with me and is an absolute joy. I didn’t parent Bailey and Beckett, the two with Melissa [Etheridge and her ex-partner Julie Cypher], but I do love them. Beckett’s somewhere in Colorado and Bailey just graduated from NYU today. They all apparently learned from my mistakes, because none of them are interested in hard drugs. I think they saw what happened and have avoided it, which certainly is a wonderful thing.”

With everything Crosby has endured in his lifetime – drug addiction, health woes and even a prison stint – he’s just grateful to be alive and pursue his passion for music.

Crosby has been married to Jan Dance since 1987.

“I think a lot of it has to do with the French code of raison d’être — it means ‘reason for being,’” he said. “A lot of people don’t have a really good, strong reason that they believe in for their life to go forward. Me, I do. I’ve got a wife I love and a family that I love and a job that I love. So I had every reason on Earth to beat the dope and get to here… My friends who are really good singers, people that I really trust, tell me that I’m singing probably better than I have in my life, and they’re as baffled by it as I am. None of us can figure it out.”