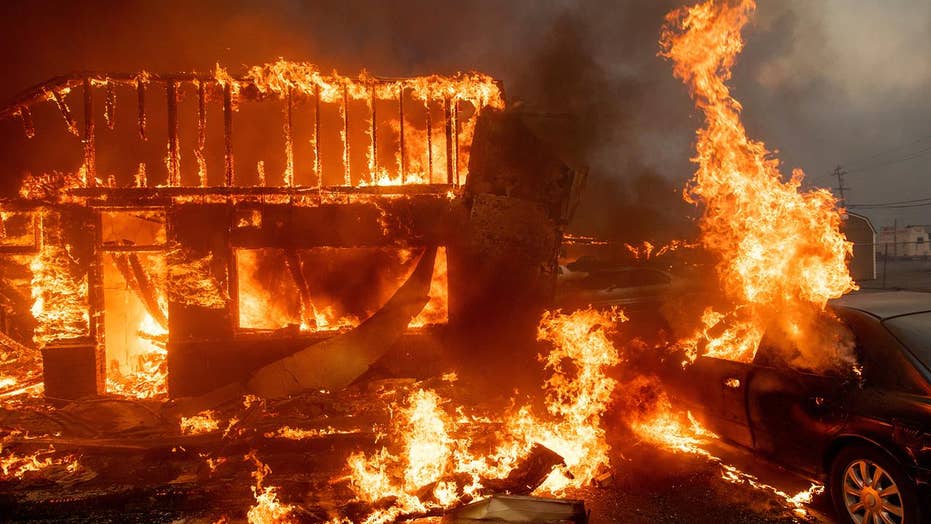 Like many wildfire evacuees, celebrities are returning to their California homes only to find smoke, ash and piles of charred debris.

The Woolsey Fire is one of three major wildfires ravaging the state. It has already destroyed an estimated 270 structures spanning nearly 92,000 acres as of Monday afternoon, according to the California Department of Forestry and Fire Protection (Cal Fire). At least 54 fire crews, using 450 fire engines, are working tirelessly to put out the blaze — which is now 20 percent contained.

Big-name celebrities such as Kim Kardashian, Alyssa Milano and Lady Gaga were among the thousands of people in Southern California who were forced to evacuate their homes last week as the Woolsey Fire spread throughout Los Angeles County. Mandatory evacuations are still in effect in several cities in the area, including Malibu, but some celebrities have already visited their incinerated properties.

Here's a look at celebrities who revealed online they were affected by the wildfires.

Miley Cyrus confirmed Sunday that her "house no longer stands" in Malibu due to the devastating Woolsey Fire.

“Completely devestated [sic] by the fires affecting my community. I am one of the lucky ones. My animals and LOVE OF MY LIFE made it out safely & that’s all that matters right now. My house no longer stands but the memories shared with family & friends stand strong,” she tweeted. “I am grateful for all I have left. Sending so much love and gratitude to the firefighters and LA country [sic] Sheriff’s department!” she tweeted, urging fans to "get involved" as firefighters and volunteers continue to risk their lives battling various blazes across the state.

On Tuesday, the singer's fiance, Liam Hemsworth, shared a photo of the house the couple shared on Twitter. In the heartbreaking image showing the devastating destruction, all that was left of the home where stone carvings that read, "LOVE."

"It’s been a heartbreaking few days," Hemsworth tweeted. "This is what’s left of my house. Love. Many people in Malibu and surrounding areas in California have lost their homes also and my heart goes out to everyone who was affected by these fires."

But despite the hardship created by the fires, the actor said he felt optimistic after seeing the Malibu community band together to support one another.

"I spent the day in Malibu yesterday and it was amazing to see the community pulling together to help each other out in any way they can,"  he wrote. "Malibu is a strong community and this event is only going to make it stronger."

David Chokachi, best known for his role on "Baywatch," also said he lost his "magical" home to the flames.

"Point Dume will rise and rebuild, even stronger. Love and strength to all our Malibu family.  And special thanks to the firefighters and all the Point Dume warriors who have fought tirelessly to protect our community," Chokachi, 50, wrote in an Instagram post, sharing a photo of the charred structure.

Robin Thicke, 41, and pregnant girlfriend April Love Geary, 23, evacuated their home Friday as a plume of smoke engulfed their neighborhood. A day later, Thicke shared a photo on Instagram revealing only a pile of debris and ash — the only thing left of their mansion.

"Contemplating next move..." Thicke captioned a photo of his 8-year-old son Julian, who was looking off into the distance.

Geary also confirmed on Instagram that their house, along with all of their belongings, were burned in the Woolsey Fire, noting that their home was "in the middle of it," Us Magazine reports.

However, Thicke confirmed his family was safe thanks to firefighters and volunteers.

"As we drove to safety, they risked their lives trying to save our homes," he wrote, in part, in a statement online. "We are safe and surrounded by friends and family."

Gerard Butler returned to his home Sunday only to find smoke, ash and piles of charred debris. Wearing a mask around his neck, the Scottish actor shared a selfie to show the devastation that the massive Woolsey Fire left behind in Southern California.

"Heartbreaking time across California," the 28-year-old star from Malibu wrote in an Instagram post, thanking the Los Angeles Fire Department for their "courage, spirit and sacrifice."

Kardashian, 38, posted pictures and video of the fire sweeping through her Hidden Hills neighborhood as she fled the area on her private jet Thursday night, People reports.

The reality TV star said she had one hour to pack and evacuate her and Kanye West's Calabasas home.

"I heard the flames have hit our property at our home in Hidden Hills but are now more contained and have stopped at the moment," Kardashian tweeted, adding she was praying "winds are in our favor."

“Just a quick update to say that I’m overwhelmed by the incredible outpouring of love and support. Thank you to everyone who messaged me, and for the dozens upon dozens of you who offered us a place to stay,” Derrickson tweeted. “We are blessed and grateful to be safe and so loved.”

"The courageous firefighters were able to save my cars and personal items recovered from my home. I thanked the fire chief and his team of firemen for all of their hard work," she wrote on Instagram. "Sad we lost our home but grateful that my family is safe."

Neil Young announced on his website that his home was destroyed in the wildfire. He also took the opportunity to blast President Trump — who previously blamed California’s “gross mismanagement of the forests” for the cause of the fire — calling him an "unfit leader."

“California is vulnerable — not because of poor forest management, as DT (our so-called president) would have us think,” Young wrote, in part, according to The Hollywood Reporter. “As a matter of fact this is not a forest fire that rages on as I write this. We are vulnerable because of Climate Change; the extreme weather events and our extended drought is part of it… Our temperatures are higher than ever here in our hottest summer on record. That has not helped. DT seems to be the Denier. (I’m holding back and not using the word liar just because it rhymes with denier.) It really is time for a reckoning with this unfit leader. Maybe our new Congress can help. I sure hope so.”