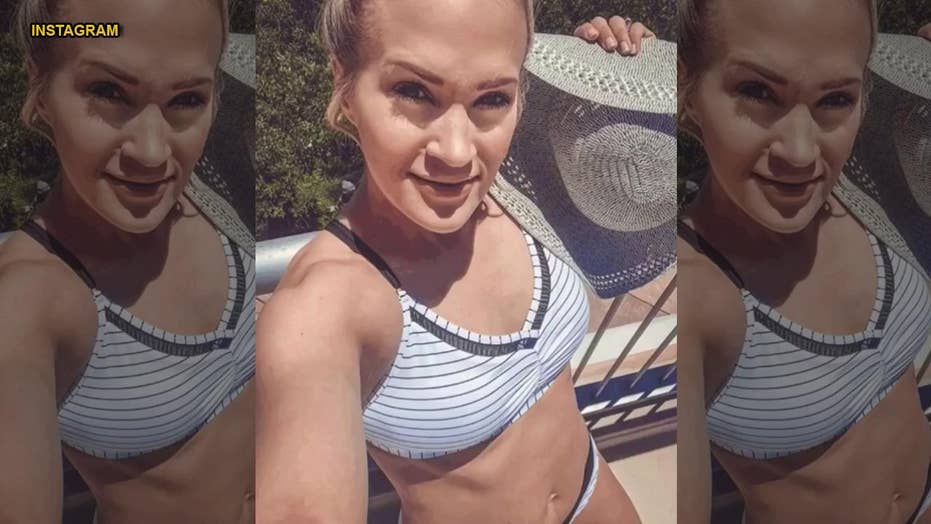 Country superstar Carrie Underwood shared a steamy swimsuit snap on Instagram, marking the first time she's showed the public her body since getting back in shape after giving birth to her second child Jacob in January. Underwood shared two photos of herself wearing a blue-and-white-striped bikini from her Calia collection. In the video loop on Instagram the star's toned abs are on full display.

Carrie Underwood likely hit some sharp notes in Milwaukee, where the "Cry Pretty" singer was carved into her very own cheese sculpture.

The "American Idol" alum shared a photo of the masterpiece on Instagram, writing, “The @fiservforum outdid themselves tonight!"

“This is me… carved into a 40 lb block of Wisconsin cheese in honor of our show here in Milwaukee," she wrote. "I’m speechless!!! #WheresTheWine."

CARRIE UNDERWOOD GUSHES OVER MIKE FISHER, DESCRIBES HOW THEY WERE 'MEANT TO BE'

The sculpture showed Underwood, 36, with her "Cry Pretty" music video eye makeup holding a microphone. The dairy delight was accompanied by sliced cheese, grapes and strawberries.

The country crooner may or may not have indulged in Carrie-cannibalism, as the "Some Hearts" singer eats a predominantly vegan diet.

She told Self in January 2017 that she stopped eating red meat when she learned about cow farming and slaughtering, but had a hard time finding tofu in her Oklahoma hometown.

"I didn’t become vegan right away, but I quit eating beef and didn’t eat a whole lot of other meat,” she said. “And then when I was on 'American Idol,' being in California, there were all these places that had vegan food, and I was like, ‘Oh my gosh, this is easy here!’”

“I want to be vegan so badly, all the way, 1,000 percent,” she added. “But traveling and stuff, it just kind of gets hard. Sometimes I may have to do some egg whites or something for breakfast.”