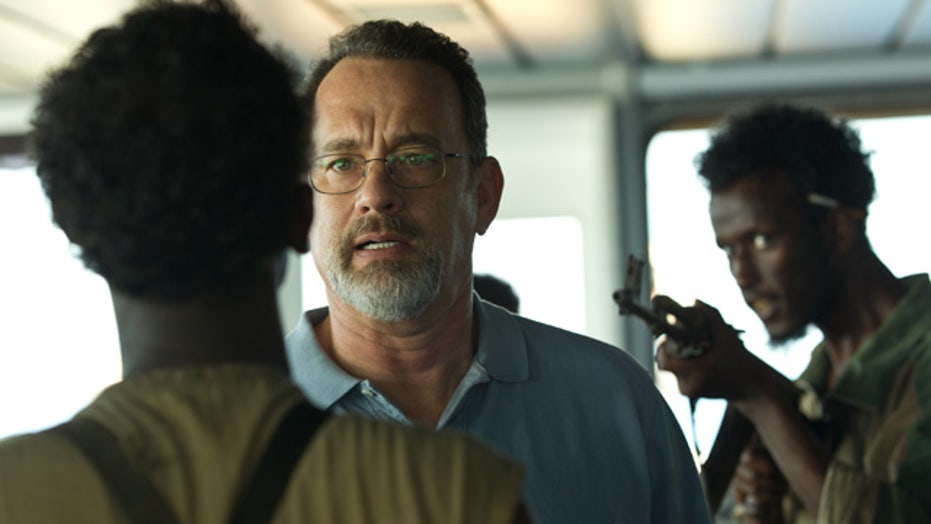 With the recent release of two thrillers, “Prisoners” and “Gravity,” there has been a rollercoaster of emotions at the movies. But it looks like Hollywood is just getting started. With a visceral wallop, Paul Greengrass’ “Captain Phillips” has cleared its moorings and launched itself onto the short list of the year’s best films.

Adapted by Billy Ray from Captain Richard Phillips’ book, “A Captain's Duty: Somali Pirates, Navy SEALS, and Dangerous Days at Sea,” the film recounts the 2009 hijacking by Somali pirates of the Maersk Alabama, and Phillip’s harrowing escape and capture in an emergency life raft. Even though many people are familiar with the story’s conclusion, “Captain Phillips” impressively delivers unpredictable white-knuckle suspense.

Just how suspenseful? Circles of sweat were visible on many critics’ backs (this one included) while exiting the theater. Early on, Greengrass goes for the jugular and tightens his hold until the final moments, culminating in one of the greatest releases of tension in any recent film (“Gravity” included).

Tom Hanks gives one of his best performances as Captain Richard Phillips, and also one of his most subtle. Adopting a New England accent, Hanks is bold and vulnerable, at once steadfast and smart, then incredibly human and fallible. Phillips is first introduced to his crew as a no-nonsense supervisor, the all-work-and-no-play type who receives frequent eye-rolls from his team. But this natural leadership saves their lives as the ship comes under attack from four Somali pirates. His quick thinking keeps him and the crew one step ahead of the Somali pirates and it’s his quick-on-the-draw survivor skills that are most impressive to watch. But as Phillips becomes the lone hostage on a life raft racing back to the Somali coast, Phillips’ fear, stress and pain hijack logic and replace it will instinctual and brute survival, which is highly unpredictable and dangerous.

Director Paul Greengrass defined the modern action film with “The Bourne Supremacy” and “The Bourne Ultimatum” and then completely changed course and delivered the highly emotional 9/11 film “United 93.” With “Captain Phillips,” Greengrass fuses the complexities and craftsmanship of his Bourne films with the emotional resonance of “United 93.” “Captain Phillips” could have easily been relegated to a Sunday night melodrama-of-the-week on network TV, but instead Greengrass delivers a deeply moving yet ferocious trip to hell off the Somali coast. Compared to other dramas of this ilk, Greengrass creates immediacy to the action that is unrivaled. This all culminates with a finale that hammers controlled chaos in the director’s signature ultra-realistic manner. This film is not a slow burn at all, but Greengrass manages to make this story as human as humanly possible amidst firestorm of suspense.

In his acting debut, Barkhad Abdi is riveting as Muse, the fidgety and naive leader of the pirates. Like Phillips, Muse is a survivalist with a conscience, and as a first-time actor, Abdi impressively conveys Muse’s greed, fear and pride. The film doesn’t treat Muse as some villainous archetype, but as a person also under duress trying to climb out of his bottomless pit of despair. There’s an odd respect and understanding between Muse and Phillips throughout this ordeal that fuels the tension. The writer, director and actors do marvelous jobs at building the suspense with that mutual respect, because Phillips knows all too well that as soon as Muse is completely broken, the result will be his own death.

Beyond the white-knuckle suspense, “Captain Phillips” is grounded by a heavy moral anchor. For most Americans, being held captive is a nightmare that they will never experience, but one would imagine under those circumstances wanting to bring whatever harm possible to the captors. Billy Ray’s screenplay impressively captures Phillips as a logical, reasonable and kind person. Throughout the experience, Phillips desperately tries to find an outcome that will save everyone’s lives, including the pirates holding him. He certainly doesn’t befriend his captors, but he is cognizant that they are kids, who like himself, are in a dire and desperate survival situation. So when the Navy comes to the rescue, Phillips does everything he can, even putting himself at risk, to keep them all from getting killed.

Finally, editor Christopher Rouse deserves much of the credit for making this film as taut and suspenseful as it is. He gives a master class on how to cut an emotional yet highly sophisticated nail-biter. He did similarly great work on Greengrass’ “Bourne” films (which he won an Oscar for “Bourne Ultimatum”) as well as “United 93.”

The second half of 2013 is becoming one of the strongest seasons in years, and “Captain Phillips” features Tom Hanks at the top of his game. It's hands-down one of the year’s best films.