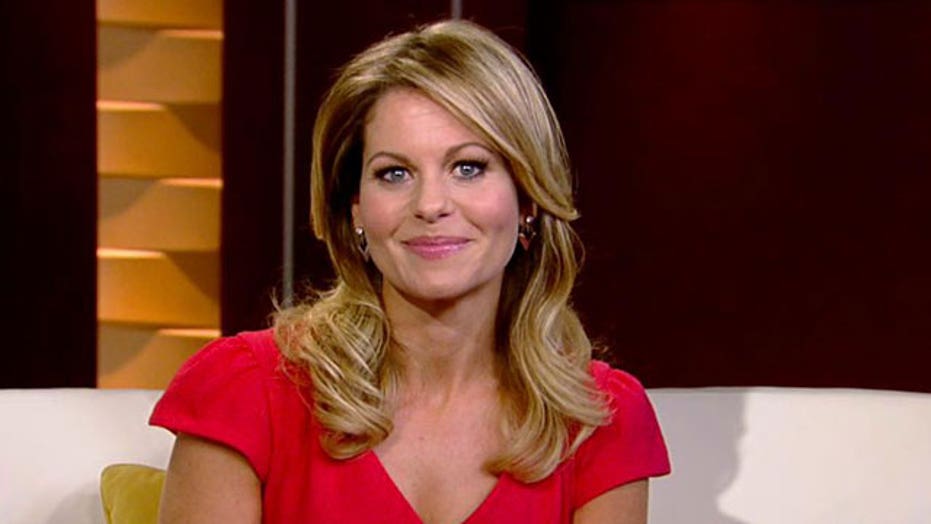 In "Balancing It All: My Story of Juggling Priorities and Purpose,” Candace Cameron Bure explains how faith guides her throughout her busy life. The 36-year-old former "Full House" star and mother of three spoke to FOX411 how her faith has affected her life and the acting roles she takes on.

FOX411: Would you say no to playing a hooker?
Candace Cameron Bure: It really depends on the story because I am an actress. I don't want to play myself otherwise I would be a host, so I can't say I would never play a hooker. It would depend on the story. Is there something redeeming about the character or within the story? Is something going to be taught? If the answer is yes, then absolutely I'll play a hooker.

FOX411: You won't let your teenage daughter post pouting photos.
Bure: She still does but if I find the pictures on there I have her take them down. I'm guilty of doing the same thing with my girlfriends.

FOX411: But it's different when it's teens.
Bure: Yes, and there are just a lot of creepy people out there who can look at those photos in a perverted way. I want to allow my kids to have the freedom and the responsibility to make choices particularly with social networking. I don't want to ban social networking in my house because I think they need to learn responsibility but of course I place rules around it and if they don't follow the rules then there are consequences.

FOX411: How did you get the title for [your] book?
Bure: It was the one question everyone keeps asking me and it was, “How do you do it all? How do you manage your career, being a wife and a mom?” So trying to tackle this but from what perspective? I just didn't feel like I could write a 10-step book on how you balance it all because nobody's life is the same, everyone's is different. So we thought it best to be written from my life perspective and pull out some of the tools and areas of my life where I had to make decisions and focus on the things that helped me balance my life.

FOX411: It's fair to say that it is a Christian perspective.
Bure: It is because I am a Christian and that for me is the first priority in my life. All the decisions I make in my life are really grounded in the foundation that I'm a Christian. That's definitely where my world view comes from, a Biblical view and that's why I make some of the choices I do.

For me God comes first. But I don't need to talk about my relationship throughout the book. I mention it in the beginning so it sets the tone to see the perspective that I'm coming from.

FOX411: You write how sometimes it's really hard but you try to always respect your husband.
Bure: Yeah I can go back to the Bible and the Bible says, “Wives respect your husbands and husbands love your wives.” There's a difference between men and women. I know my husband doesn't need the type of love I require that is much more caring and sensitive in nature like, “Oh honey you look wonderful.” It's like my husband doesn't need to hear that on a daily basis like I do. But he needs to be respected. I like that my husband is a leader, he's a man's man. I want him to lead our family. It doesn't mean we don't make decisions together. It doesn't mean I don't have a voice in our marriage, of course I do. I'm a very strong woman and an opinionated woman but I don't think a marriage is at its best when you have two people vying for the same position so someone has to yield at some point and ultimately I will defer to my husband. That's not to say he isn't constantly going, “Well what do you think?” And we compromise on things, but ultimately he makes the decision. I know that makes him feel respected as the man of our home. We've been married for 17 years and that's short compared to my parents and grandparents. Some people think my perspective is old fashioned. I'm not trying to say I've got it all down. I certainly don't.

FOX411: You are very honest in the book that you had to surrender to being a full-time mother and it took a while.
Bure: I'd been working since I was 5. I got married at 20 and at 22 had my first child. I had only known a life of working and I enjoyed it. I thought I would continue working and then I realized that I couldn't raise my kids the way I wanted to raise them if my husband had his job and I had mine. It was natural for me to say, “Hey I'm going to put my career on hold and stay at home and raise my kids,” but it was a very hard transition. It was difficult for the first few years. I really did have to surrender to motherhood and say, “This is where I'm going to be for however many years of my life.” I had to recognize it wasn't going to be about me. When you have you're caring for little people and they become more important.