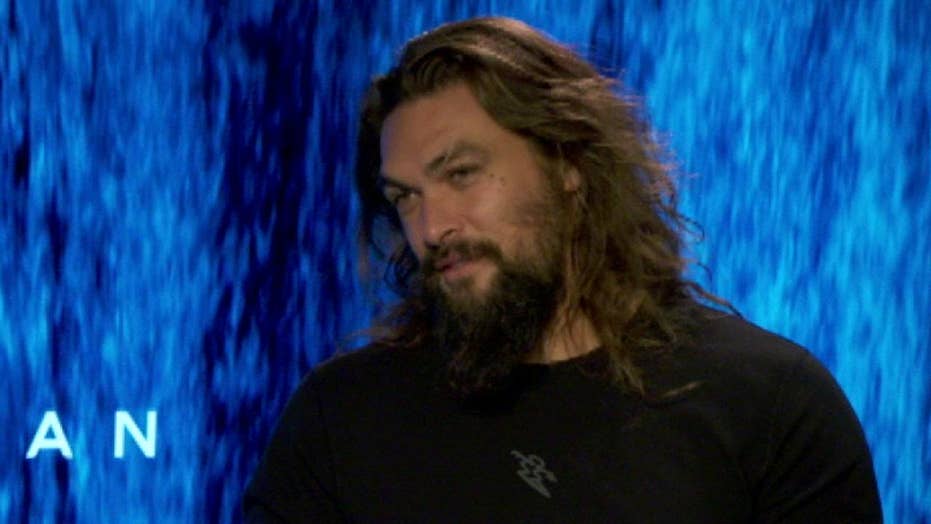 Jason Momoa talks about starting to feel the fandom and fame.

NEW YORK – Jason Momoa gives “Aquaman” his first big solo superhero close-up in an epic-scale origin story set on land and sea. Fox News caught up with the actor and found out what he wanted his “Aquaman” character to be and how he’s just starting to feel the scope of fandom that comes with diving into the superhero world.

Fox News: Were you able to put your own spin on "Aquaman"?
Jason Momoa: We did a lot of improv. There were just moments where [director] James [Wan] was like, 'Alright we got it.' He let me be free and then play around and just do little things that felt right. So yeah there's definitely a lot, there's more of me in this character than anything I've ever played.

Fox News: What did you want your Aquaman to be?
Mamoa: I really wanted to have someone who was the reluctant — he didn't want to be king and he wanted to be left alone. I think because [Aquaman] had been built up and his dreams had been crushed and he’s been left and he's been abandoned and I think he's been led to believe that he was something special and the truth is he wasn't. So I feel he's got a lot of walls up...and until the time when we really need him the most, it's our family and the people that love us the most that make us into that king.

Fox News: This character has a big fan following. Has that been a shock to you?
Momoa: It was five years ago when ["Justice League" director] Zack Snyder called me in and I loved the idea. I was barely in “Batman v Superman” and then “Justice League” was an awesome experience. Got to play him exactly how I wanted to play him with full support from Zack. Then this one was hard because you have to bridge the gap between, you know, a weekend with Arthur on “Justice League” to here's his whole... but I had spent a lot of time with Zack building my ideas of why he is the way that he is, so that it could register with me when I’m building the character. I think we, I kept that, but also… he needs to be fun. We need to have fun with him.

Fox News: How are you handling all the newfound attention?
Momoa: I landed in New York and I could feel like a shift because I went through customs and I just felt like heads turn. And then the paparazzi. I think things are going to shift. I hope it all stays the same but I don't know. I don't know what's, I don't know what's ahead.

I'm pretty open, you know, I try to give respect to my fans and I hope they give me the respect back...I do like to please people when I have it in me to [but if]...I'm with my family you're probably going to catch me as being an ass----. I'm not going to go out of my way to make you feel better when I'm barely going to see my children… just from my Instagram, you can see that I'm not with my family. But I do go to a lot of fan things...I get to spend time with them, hugs, dedicate that time, and then also when I'm by myself, yeah I don't care, yeah let's get a picture, but when I'm with my kids I turn into a bit of a different animal. But I think most parents do. If someone was going around you with a camera [with your] babies — it's just an awkward feeling.