Amy Schumer addressed the allegations of sexual assault made against Aziz Ansari. (Reuters)

Amy Schumer addressed the recent sexual misconduct allegation against her comedian friend Aziz Ansari, saying the incident should teach both men and women alike what “behavior is not OK.”

Speaking on “The Katie Couric Podcast” for the “Wonder Women” series released Thursday, Schumer said she doesn’t want to see Ansari’s career impacted after a woman, identified as "Grace," detailed to babe.net a sexual encounter with the actor. The accuser called it “the worst night of my life.”

“I don’t think anyone wants to see Aziz’s career ruined or his life ruined or anything like that, but that’s where people’s minds go,” Schumer told Couric on the podcast when talking about the #MeToo movement. “They go, ‘Does he deserve this?’ And it’s really not about that. I think it’s about expressing and showing women that that behavior is not OK and not only can you leave, but you need to leave.”

“Because then the women who come after you, you’re leaving a mark for them too,” she added.

Amy Schumer addressed the allegation made against her "friend" Aziz Ansari in a podcast on Thursday. (Reuters)

Schumer said though Ansari is her “friend,” she also empathized with the accuser.

She continued, “I identify with all the women in these situations. Even if it’s my friend, I don’t go, ‘Oh, but he’s a good guy.’ I think, ‘What would it feel like to have been her?’”

The 36-year-old actress said women should never make excuses when dealing with uncomfortable situations. Schumer added that she had been "flat-out raped" herself, and that there are “so many different levels” of inappropriate behavior. 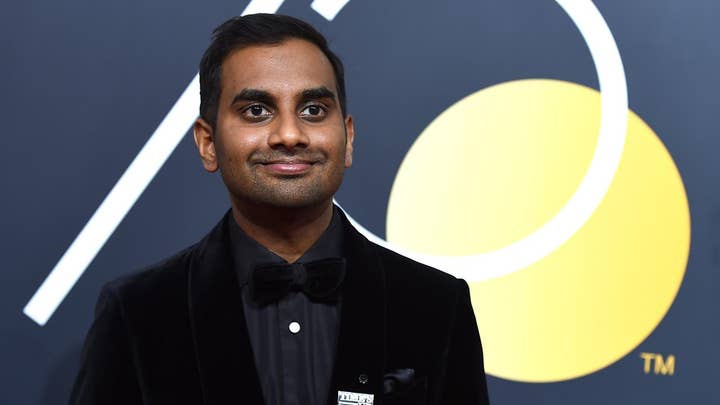 “If you have a doctor that makes you uncomfortable, or you get a massage, or you have a date with someone and they coerce you in a situation like the Aziz one, I don’t think there’s any sort of criminal charge, but I think that it’s good for everybody to learn that that behavior’s not acceptable,” Schumer said.

“It’s not a crime, but it’s not cool. And it can still really mess with a woman.”

AZIZ ANSARI DEFENDED BY FELLOW COMEDIAN JOEL MCHALE: 'IT SOUNDS LIKE IT WAS CONSENSUAL'

The 23-year-old accuser told babe.net she met Ansari, 34, in New York City for a date last year. But when she went back with the actor to his luxury Tribeca apartment, the night turned uncomfortable. She accused Ansari of failing to take “no” for an answer and aggressively trying to have sex with her even when she was giving verbal and non-verbal cues that showed her discomfort.

Aziz Ansari said the encounter with the 23-year-old accuser "by all indications was completely consensual.' (Reuters)

“It took a really long time for me to validate this as sexual assault,” the accuser told babe.net. “I was debating if this was an awkward sexual experience or sexual assault. And that’s why I confronted so many of my friends and listened to what they had to say, because I wanted validation that it was actually bad.”

Ansari later said in a statement: “In September of last year, I met a woman at a party. We exchanged numbers. We texted back and forth and eventually went on a date. We went out to dinner, and afterwards we ended up engaging in sexual activity, which by all indications was completely consensual.

“The next day, I got a text from her saying that although 'it may have seemed okay,' upon further reflection, she felt uncomfortable. It was true that everything did seem okay to me, so when I heard that it was not the case for her, I was surprised and concerned. I took her words to heart and responded privately after taking the time to process what she had said. I continue to support the movement that is happening in our culture. It is necessary and long overdue.”