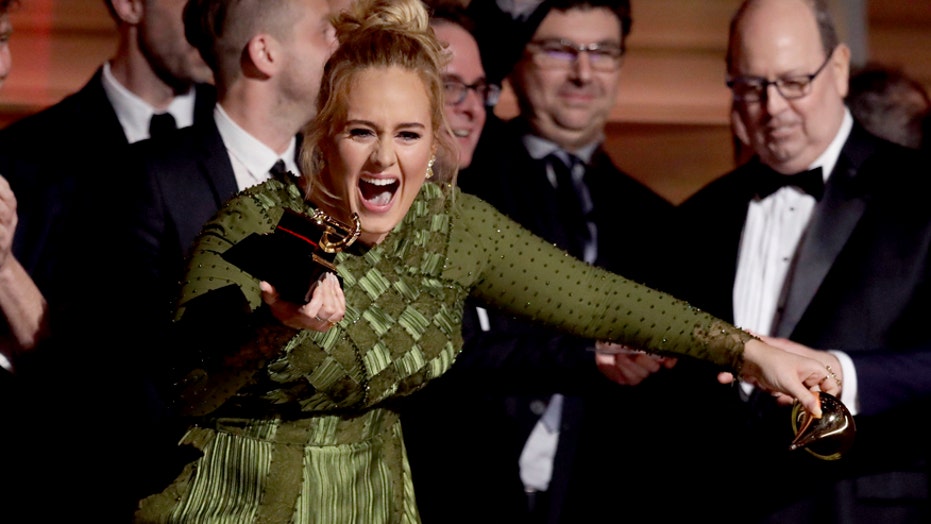 Rumor has it that Adele may be rolling in the deep with her new beau, rapper Skepta.

Skepta, 37, who is also a Tottenham native, has been on a string of dates with Adele. Friends of the pair are apparently "hoping and predicting that they go on to become a great couple," according to a source.

Adele at the 59th Grammy Awards on Feb. 12, 2017 in Los Angeles, Calif. (Photo by Axelle/Bauer-Griffin/FilmMagic)

According to The Sun, the new couple has been in contact since Adele first announced her split with Konecki in April.

Less than two weeks ago, the "Skyfall" artist celebrated the rapper's 37th birthday at the Crystal Maze experience in London.

"Adele and Skepta have been there for each other a lot after both their relationships split up. They have a close bond and there’s definitely a special connection," a source revealed.

“They’re spending more and more time together. Some of their friends are hoping and predicting they could end up being a great couple one day.”

ADELE POSTS MEME OF HERSELF FOLLOWING SPLIT FROM HUSBAND

In 2016, Skepta stated to ES Magazine that he was in contact with Adele, "Adele texts me all the time and keeps me in check. She speaks to me about how things are going."

That same year, Adele posted a picture of the rapper on her social media, captioning it "Tottenham Boy" with a heart emoji.

The Mercury Prize winner replied "love you" with a red rose emoji on Twitter.

"She gassed me up. One day I was just chilling and she [tweeted] a picture that said ‘Tottenham boy’ and she’s from Tottenham as well," he told IBTimes UK.

"I was actually going to quit music that day, that was one of the sickest things ever. She’s like the lady of Tottenham."

Adele is the mother to her and Konecki's almost-7-year-old son Angelo, while Skepta welcomed his daughter River in November.

“They are both private about their love lives and they are both committed to their children first and foremost as well,” a source said.

Skepta had a brief relationship with supermodel Naomi Campbell early last year and was rumored to have split with her after her discovery of another woman expecting his daughter.

Adele filed for joint physical and legal custody of Angelo. Four days after she filed for divorce, Konecki agreed to her request, showing that their split is seemingly amicable.

Fans are excited about this news and are voicing their opinions on social media.

"We ain't ready for the fire if Adele and Skepta do a collab," a Twitter user wrote.

"This would be a power couple of our time," another user tweeted.