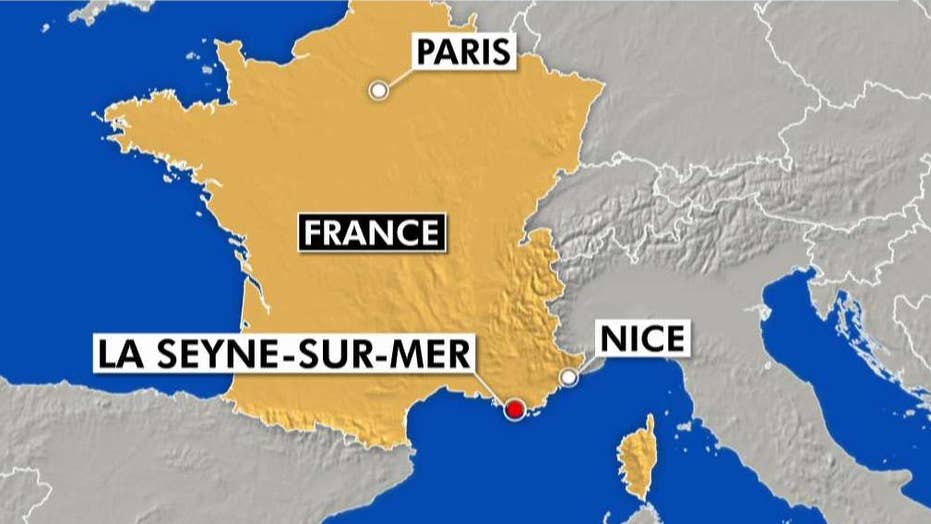 Woman arrested after attacking two people with a box cutter in a supermarket in southern France.

A woman who allegedly shouted "Allahu akbar" attacked two people with a box cutter at a supermarket in southern France on Sunday before she was arrested, local media reported.

The incident took place around 10:30 a.m. at the supermarket Leclerc in the Mediterranean city of La Seyne-sur-Mer, located near Marseilles.

The woman was dressed in black and wearing a veil at the time, shouting "Allahu akbar" -- "God is great" in Arabic -- before she was placed under control by people intervening, according to Var-matin.

Europe 1 radio quoted Toulon prosecutor Bernard Marchals as saying that a customer in the store in La Seyne-sur-Mer was injured in the chest in the Sunday morning attack and hospitalized.

A woman at the market's cash register was injured too, but less seriously.

A woman crying "Allahu akbar" injured 2 people with a box cutter at a supermarket in southern France on Sunday. (Google Street View)

Marchal said the suspect may have mental health problems, but has not been identified as police search her home.

"It's apparently an isolated case involving a person with psychiatric issues," the prosecutor told Le Monde newspaper quoted the prosecutor as saying. However, that does not exclude the possibility that the suspect was radicalized, Marchal added.

"There is a presumption of attempted murder and ... of a crime with terrorist implications," Marchal was quoted as saying.

Regional newspaper Nice-Matin, which first reported the 10:30 a.m. attack, quoted an unidentified witness as saying that people in the store stopped the woman from cutting anyone else.

A sense of edginess has been with France since a murderous series of killings in 2015 in the name of the Islamic State group. Adding to concerns are the hundreds of French who have traveled to the Iraq-Syria war zone, or are returning as ISIS crumbles.

In March, an hours-long attack and hostage-taking in a supermarket near the southern French town of Carcassonne left four people dead. A man attacked people near the Paris Opera house in May, killing one person and injuring four, an action claimed by the Islamic State

Last week, a man who took hostages in a Paris building was hospitalized in a psychiatric unit.