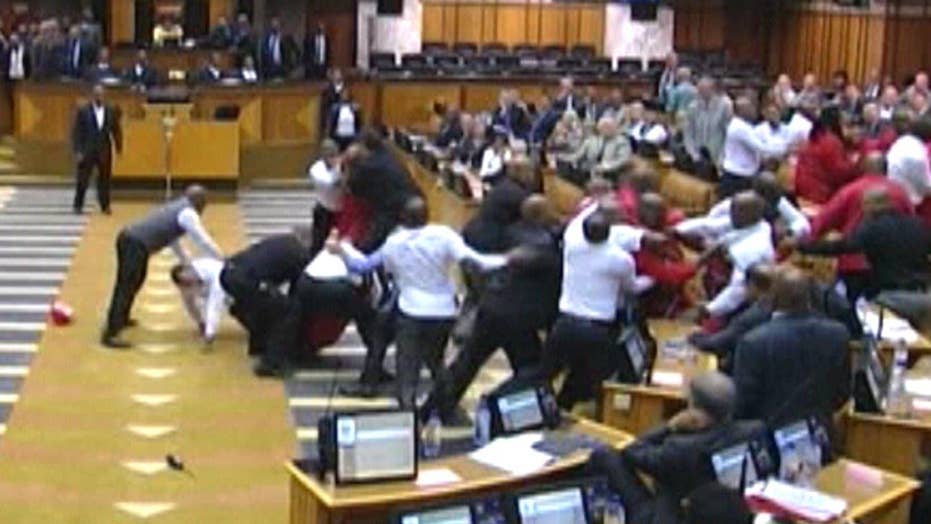 Washington has been divided in recent years, but it has never sunk to levels seen in other parts of the world.

In recent years, tensions between governing bodies have sometimes escalated into full-scale brawls, with lawmakers throwing chairs, fists and any other objects they can find at each other.

Here are five of the wildest parliament fights:

A 2016 hearing in Turkey over a controversial proposal to strip lawmakers of their immunity from prosecution erupted into a massive fight.

Video of the dispute begins with lawmakers grabbing each other – but things quickly pick up as politicians start jumping off tables to enter the fray.

Water bottles then are seen being thrown through the air as punches and kicks are exchanged.

The contentious scrap between members of the ruling party and their opposition reportedly left several injured.

So much for holiday cheer.

Lawmakers at odds over “the composition of Georgian delegations in international institutions,” according to The Telegraph, brawled on Boxing Day in 2014.

The fracas started after one opposition lawmaker reportedly started swearing during an address to members of the party in charge.

A video of the brawl shows politicians grabbing long microphones and swinging them as if they were batons.

Members of this opposition party brawled with security guards inside South Africa’s parliament in 2016 following a disruption of then-President Jacob Zuma’s remarks.

The red-clad members of the group were arguing that Zuma should leave over corruption allegations – and were quick to tussle with the guards that showed up to escort them out of the building.

Window panes in a parliament door were shattered in the chaos.

A 2015 dispute in Nepal over a draft constitution sparked a wild fight that involved lawmakers breaking chairs and swinging their cushions around.

Three security guards were left injured in the chaos, according to The Guardian.

Ukraine-Russia tensions lead to the “Rumble in the Rada”

A debate in Ukraine’s parliament in 2012 over a bill that would allow the use of the Russian language in courts, hospitals and other institutions in the Russian-speaking regions of the country became too much for lawmakers to handle.

Video of the fight that broke out – which the BBC dubbed the “Rumble in the Rada,” in reference to Ukraine’s parliament chamber building  -- shows one lawmaker pounding on the back of the other.

At another point in the footage, a politician is seen taking off his jacket and then unfastening his tie and shirt collar in anticipation of becoming involved in the brawl.