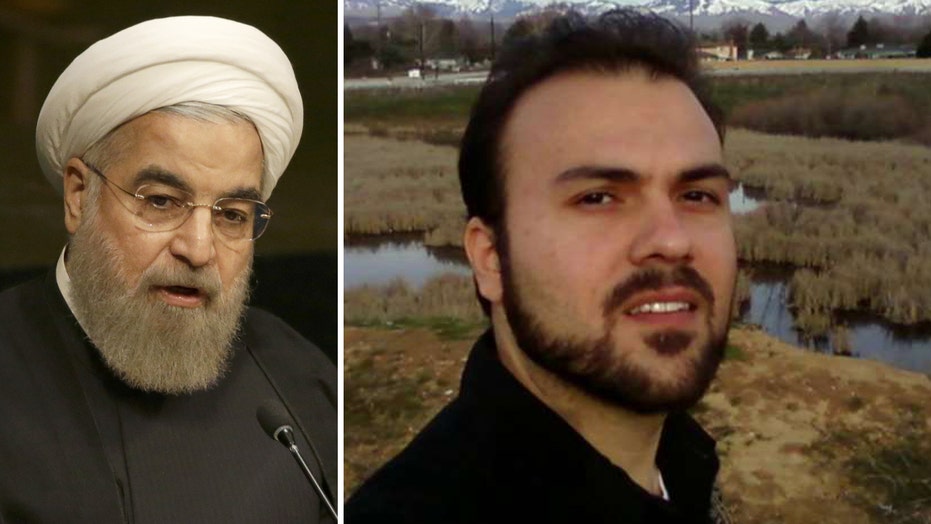 Iranian President Hassan Rouhani said he is willing to free three Americans held in Iranian prisons if the U.S. will release Iranians it is holding behind bars, but the wife of one of the Americans said the offer is an insult.

In New York for the UN General Assembly, Rouhani told CNN he is willing to make a deal that could potentially free Christian Pastor Saeed Abedini, former U.S. Marine Amir Hekmati and Washington Post journalist Jason Rezaian. Some 19 Iranian citizens are in U.S. custody on charges of violating sanctions against Iran’s nuclear program, crimes Rouhani said should be moot given the U.S.-brokered international deal relaxing sanctions against Iran in exchange for the promise of nuclear inspections.

"My husband is not collateral. He is a father and a man who broke no law."

“If the Americans take the appropriate steps and set them free, certainly the right environment will be open and the right circumstances will be created for us to do everything within our power and our purview to bring about the swiftest freedom for the Americans held in Iran as well,” Rouhani said through an interpreter. “If the Americans take the appropriate actions vis-à-vis Iranian citizens who are being imprisoned here, then the right atmosphere and environment will be created for reciprocal actions, perhaps.”

Rezaian and Hekmati are charged with spying, while Abedini has been detained since 2012 for proselytizing.

"My husband is not collateral,” she told FoxNews.com. “He is a father and a man who broke no law. Yet, Iran is treating him like a pawn in a game of chess. President Rouhani's demand that America release 19 criminals in exchange for his consideration of releasing individuals like my husband, imprisoned solely for his faith, demonstrates that the Iran of today is no different than the Iran who took Americans hostage during the Iranian revolution.”

Abedini added that the Iranian government should be doing more to show good faith to the global community after the recent lifting of sanctions.

“The environment is ripe for Iran to demonstrate it is ready to re-enter the global market and international scene of diplomats; it is time to show its good will, to change its image from one of a pariah to a member of the global society who will protect fundamental rights," said Naghmeh Abedini, who lives near Boise, Idaho, with their two children but is in New York to press her husband's case to the international community.

Supporters of all three prisoners wanted their release to be part of the nuclear deal, which resulted in more than $100 billion in Iranian assets, frozen in the wake of the 1979 hostage crisis, being slated for release to Iran. But the U.S. negotiating team, led by Secretary of State John Kerry, resisted linking the fate of the prisoners to the deal.

"It's been our position from the beginning that the release of Pastor Saeed and the other imprisoned Americans should have occurred before any nuclear agreement was reached with Iran,” said Jordan Sekulow, executive director of the American Center for Law and Justice, which represents Abedini’s family. “Unfortunately, that did not occur and in our view we lost a lot of bargaining power by not securing the release of Pastor Saeed and the others earlier. Now, it is an uphill battle.”

Sekulow also said that Rouhani’s comments are likely nothing more than empty promises.

“The comments from Iran's president are just that -- comments made by a regime that simply cannot be trusted,” he said. “We know that Secretary of State Kerry discussed the captive Americans with Iran's Foreign Minister this weekend in New York.

“Talking is fine," he added. "But what we need to see is action.”