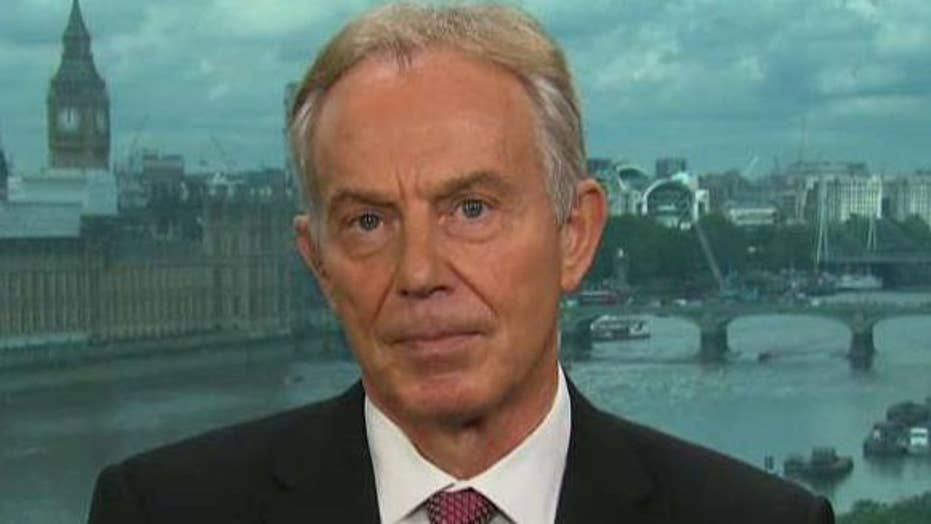 On 'Fox & Friends,' former prime minister of England reacts to the referendum results

Britain's stunning vote to bolt the EU sets into motion a lengthy diplomatic divorce for which there is no blueprint, and the economic and political upheaval is likely just beginning, say experts.

The immediate effect of the vote, in which Britons voted to leave the 28-nation bloc by a 52-48 margin was Prime Minister David Cameron's announcement that he will step down sometime before October.

"The British people have voted to leave the European Union and their will must be respected," Cameron said Friday morning. "I will do everything I can to steady the ship over the coming weeks, but I do not think it would be right for me to try to be the captain that steers our country to its next destination."

Cameron's successor will play a major role over the next two years or so during negotiations between the UK and the EU on how to separate economies that have become intertwined since 1973.

Former London Mayor Boris Johnson, like Cameron a Conservative, was the most prominent supporter of the "leave" campaign and now becomes a leading contender to replace Cameron. Johnson said Friday he was "sad" to see Cameron resign but didn't say whether he plans to replace him.

The split will not isolate Britain, Johnson vowed.

“We cannot turn our backs on Europe. We are part of Europe,” he said. “Britain will continue to be a great European power.”

Boris Johnson, (l.), could replace Cameron, (r.), as prime minister, after his "leave" side won. (Reuters)

Dire warnings prior to the vote that an exit would hurt the UK economy proved true in the short term, as the pound suffered one of its biggest one-day falls in history Friday. Only time can tell if the fallout will be lasting or extend to the broader economy.

Under Article 50 of the Treaty of European Union, the portion that provides for an exit, talks will likely last two years, with the possibility for extension if all of the remaining 27 EU nations agree. But the clock starts ticking only when the UK officially notifies the EU it wants out.

The EU charter is written in such a way as to punish member nations who leave. Only Greenland, as a semi-autonomous member and during vastly different circumstances in 1985, has exited the EU.

If no deal is reached after two years and no extension is implemented, the UK automatically reverts to World Trade Organization rules, meaning the UK faces tariffs on all goods it sells to the EU.

Speeding up the process may be in the interests of both parties, according to Martin Schulz, president of the European parliament.

“Uncertainty is the opposite of what we need,” Schulz told the Guardian.

The severe warnings and thorny negotiations that await were not enough to dissuade Johnson and UK Independence Party leader Nigel Farage, who framed the vote as a chance to reclaim the nation's sovereignty.

“I hope this victory brings down this failed project, and leads us to a Europe of sovereign nation states trading together, being friends together, cooperating together — and let’s get rid of the flag, the anthem, Brussels and all that has gone wrong.”

Supporters complained that unelected bureaucrats in Brussels had usurped national authority, and that the EU had become a behemoth that no longer resembled its original vision.

"It's a vindication of 1,000 years of British democracy," commuter Jonathan Campbell James declared at the train station in Richmond, southwest London. "From Magna Carta all the way through to now we've had a slow evolution of democracy, and this vote has vindicated the maturity and depth of the democracy in our country."

Germany called top diplomats from the EU's six founding nations to a meeting Saturday, and the president of the European Council, Donald Tusk, said the bloc will meet without Britain at a summit next week to assess its future. Tusk vowed not to let the vote derail the European project.

"“It’s true that the past years have been the most difficult ones in the history of our union, but I always remember what my father used to tell me, what doesn’t kill you makes you stronger,” he said.

But already, far-right leaders in France and the Netherlands were calling for a similar anti-EU vote.

The vote also was a rebuke to President Obama, who traveled to the UK earlier this year to urge voters to stay in the EU. Obama's warning that Brits would be relegated to the “back of the queue” in trade with the U.S. if they left prompted accusations the U.S. president was meddling in another nation's politics.

Donald Trump, in Scotland Friday to visit to one of his golf courses, said Britons "took back their country. It's a great thing." He likened the vote to the U.S. sentiment that has propelled him to the presumptive Republican presidential nominee, saying people in the United States and the United Kingdom are angry about similar things including unfettered immigration and trade policies that he claims cost domestic jobs.

"The people of the United Kingdom have exercised the sacred right of all free peoples," Trump said. "They have declared their independence from the European Union, and have voted to reassert control over their own politics, borders and economy."