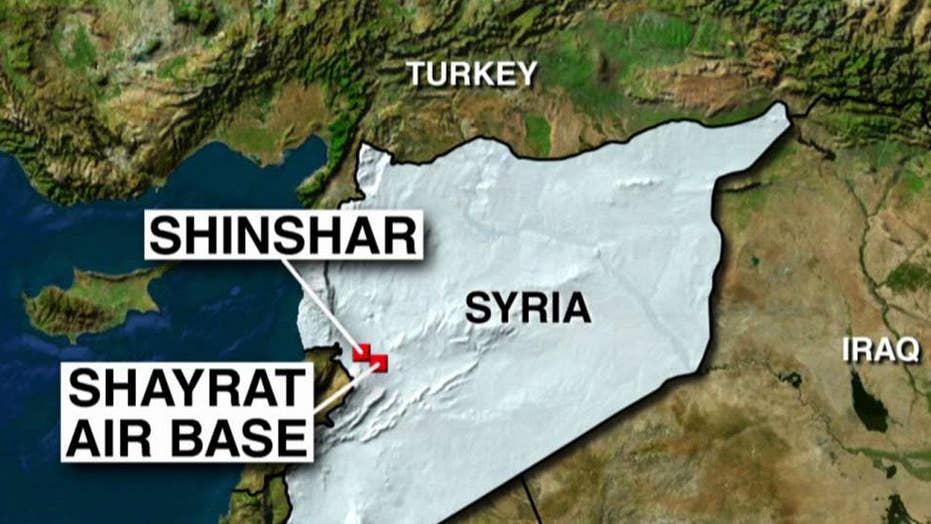 US launches airstrikes in Syria

The United States launched nearly five dozen cruise missiles at a Syrian airfield early Friday in response to a chemical weapons attack that killed dozens of civilians, the first direct assault on the Damascus government since the beginning of that country's bloody civil war in 2011.

"It is in the vital national security interest of the United States to prevent and deter the spread and use of deadly chemical weapons," President Donald Trump said in a statement. "Tonight I call on all civilized nations to join us in seeking to end the slaughter and bloodshed in Syria, and also to end terrorism of all kinds and all types."

Pentagon spokesman Capt. Jeff Davis said initial indications were that the strike had "severely damaged or destroyed Syrian aircraft and support infrastructure and equipment ... reducing the Syrian Government's ability to deliver chemical weapons." There was no immediate word about any casualties.

Trump said the base was used as the staging point for Tuesday's chemical weapons attack on rebel-held territory, which killed as many as 72 civilians, including women and children.

"Assad choked out the lives of helpless men, women and children," Trump said from Mar-a-Lago, Fla. "Even beautiful babies were cruelly murdered in this very barbaric attack. No child of God should ever suffer such horror."

National Security Adviser H.R. McMaster said the strike should cause a "big shift in Assad's calculus."

"Obviously the regime maintains a certain capability to commit mass murder with chemical weapons beyond this air field," McMaster said. "But it was aimed at this airfield because we could trace that attack back to this facility. It was not a small strike."

U.S. military officials said they informed their Russian counterparts of the impending attack in an effort to avoid any accident involving Russian forces. Nevertheless, Russia's Deputy U.N. ambassador Vladimir Safronkov warned that any negative consequences from the strikes would be on the "shoulders of those who initiated such a doubtful and tragic enterprise."

Davis, the Pentagon spokesman, confirmed that "there are Russians at the base," but said they had been warned "multiple times" to leave. He did not know whether Russian aircraft were at the base when the missiles hit.

The U.S. also notified its partner countries in the region prior to launching the strikes.

U.S. defense officials tell Fox News that two warships based in the eastern Mediterranean, the USS Porter and the USS Ross, have been training for the past two days to execute this mission.

“Our forward deployed ships give us the capability to quickly respond to threats," said a Navy official. "These strikes in Syria are a perfect example - this is why we're there."

The original plans called for two targets, the airbase and a chemical weapons storage facility. However, Pentagon planners decided late Thursday to target just the airbase.

As a candidate, Trump warned against against the U.S. getting pulled into the Syrian civil war. But the president earlier in the week appeared moved by the photos of children killed in the chemical attack.

"I think what happened in Syria is one of the truly egregious crimes and shouldn't have happened and it shouldn't be allowed to happen," Trump told reporters traveling on Air Force One to Florida earlier , where he was holding a two-day summit with Chinese President Xi Jinping.

Late Thursday, a U.S. government official told Fox News that the intelligence community has high confidence that the attack was carried out by Syrian government aircraft. The official said the analysis was consistent with eyewitness reports that fixed-wing aircraft launched the strike.

The official described the use of sarin gas in the attack as a watershed. The Assad government had agreed to disband its chemical weapons capability by 2014 under an agreement coordinated with the Obama administration and Russia. Tuesday's attack was considered a breach of that agreement.

The Turkish ministry of health says the preliminary results show the use of sarin gas. Sarin is a colorless, odorless liquid and is highly volatile while moving from its liquid state to a gas. Unlike chlorine, which the Assad government has used on a regular basis, sarin does not dissipate quickly. The victims in Tuesday’s attack showed all the hallmarks of a sarin attack – including twitching, jerking and foaming at the mouth.

Trump's decision to attack Syria came three-and-a-half years after President Barack Obama threatened Assad with military action after an earlier chemical weapons attack killed hundreds outside of Damascus. Obama had declared the use of such weapons a "red line." At the time, several American ships in the Mediterranean were poised to launch missiles, only for Obama to abruptly pull back after key U.S. ally Britain and the U.S. Congress balked at his plan.

He opted instead for the Russian-backed plan that was supposed to remove and eliminate Syria's chemical weapons stockpiles.

The world learned of the chemical attack earlier in the week in footage that showed people dying in the streets and bodies of children stacked in piles.

The U.S. show of force in Syria raises legal questions. It's unclear what authority Trump is relying on to attack another government. When Obama intervened in Libya in 2011, he used a U.N. Security Council mandate and NATO's overall leadership of the mission to argue that he had legal authority — arguments that many Republicans opposed. Trump can't rely on either justification here.

Unclear also is whether Trump is adopting any broader effort to combat Assad. Under Obama, the United States largely pulled back from its support for so-called "moderate" rebels when Russia's military intervention in September 2015 led them to suffer a series of battlefield defeats. Instead, Obama sought to work with Russia on a negotiated transition.

Trump and his top aides had acknowledged in recent days the "reality" of Assad being in power, saying his ouster was no longer a priority. But the chemical weapons attack seemed to spur a rethink. In Florida on Thursday, Secretary of State Rex Tillerson said of Assad: "There's no role for him to govern the Syrian people."