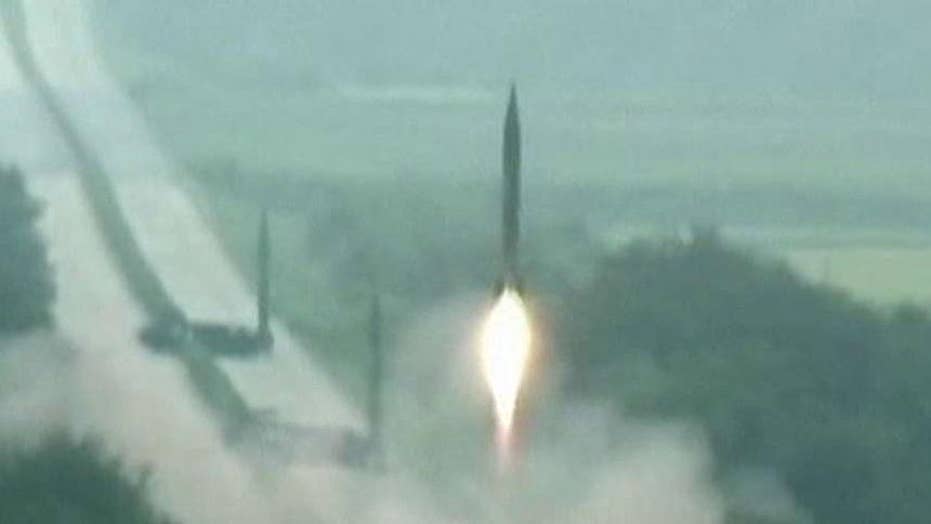 Meeting on the sidelines of the U.N. General Assembly, U.S. Secretary of State John Kerry and the Japanese and South Korean foreign ministers said the North Korean test earlier this month would not go unanswered. The test was North Korea's fifth and, along with recent ballistic missile launches, has been widely criticized as destabilizing to regional and international security.

Kerry said the U.S. remained deeply committed to its mutual defense obligations with Japan and South Korea and would not shirk in "rolling back the provocative, reckless behavior of" North Korea.

"The global community will not be intimidated and will not pull back from our obligations," Kerry said. He called for North Korea and its leader Kim Jong-un to freeze Pyongyang's nuclear and missile programs immediately and return to denuclearization talks.

The South Korean foreign minister, Yun Byung-se, echoed Kerry's comments, calling North Korea's missile and nuclear tests a "ticking time bomb" and a threat to world safety. "What we see is a looming perfect storm that may not only pounce on Northeast Asia but sweep over the entire world," he said.

The Obama administration has been nudging allies Japan and South Korea to set aside historical differences and cooperate more closely in diplomacy and security as the threat posed by North Korea intensifies.

Japanese Foreign Minister Fumio Kishida said that the U.S. alliances and a "forward-looking" relationship between Japan and South Korea were needed for regional peace and stability in Asia's "tough" security environment.

"We must make North Korea understand that repeated provocations will isolate them from the international community and that there can be no bright future for them at all," Kishida said.

In a joint statement, three governments said they "explored ways to work together" to ensure countries fully implement existing U.N. sanctions on North Korea. They also discussed work in the Security Council to tighten the sanctions and the possibility of taking measures of their own to restrict revenue sources for the North's missile and nuclear programs.