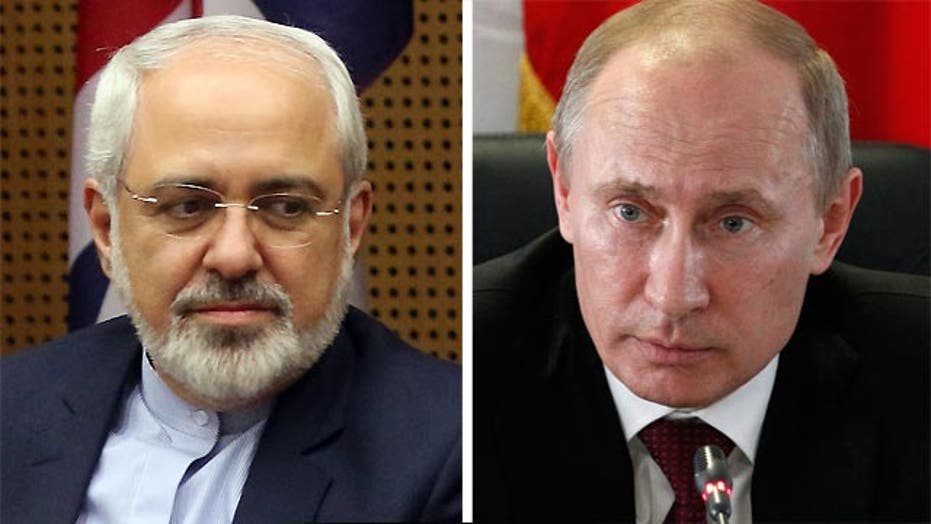 New fears as Russia lifts ban on missiles to Iran

Russia’s move Monday to lift its ban on delivery of sophisticated air defense missiles to Iran drew criticism from Israel and raised U.S. concerns, as world powers continue to negotiate with Iran about its nuclear program.

In a clear sign that he wants to strengthen economic ties with Iran, Russian President Vladimir Putin signed a decree Monday lifting his country’s ban on the delivery of S-300 anti-missile rocket systems to the Islamic Republic, Reuters reported.

Russia signed an $800 million contract to sell Iran the S-300 missile system in 2007, but later suspended their delivery in 2010, after strong objections from the U.S. and Israel.

Monday’s developments follow the interim deal between Iran and several world powers -- including the U.S. and Russia -- to lift sanctions on Iran if it limits its nuclear program. Western nations suspect Iran’s nuclear aspirations were aimed at developing an atomic weapons capability. Iran insists the program is for purely peaceful purposes.

“We think given Iran's destabilizing actions in the region in places like Yemen and Syria or Lebanon, this isn't the time to be selling these kinds of systems to them,” Harf told reporters.

When asked whether talk of a missile deal between Tehran and Moscow would jeopardize nuclear negotiations with the group of six world powers, Harf said Secretary of State John Kerry reiterated U.S. concerns in a phone call with Russian Foreign Minister Sergey Lavrov Monday.

“We don't believe it's constructive at this time for Russia to move forward with this but we've worked very closely with the Russians on the P5+1 negotiations. We don't think this will have an impact on unity in terms of inside the negotiating room,” Harf said.

Israel reacted swiftly to Russia lifting the ban on selling missiles to Iran, saying it is a "direct result" of the international community's framework nuclear deal with the Islamic Republic.

"This is a direct result of the legitimacy that Iran obtained from the emerging nuclear deal," he said. Steinitz added that the arms deal shows that Iran plans to use the relief from economic sanctions to buy weapons, not improve the living conditions of its people.

Israel has harshly criticized the U.S.-led nuclear deal, saying it would give Iran relief from sanctions while leaving its nuclear program largely intact. Israel believes Iran still intends to develop a nuclear weapon.

Iranian Defense Minister Hossein Dehghan said Monday that Russia lifting the ban on missile sales to his country could lead to an expansion of cooperation and help stability in the region, Reuters reported, citing Islamic Republic of Iran Broadcasting.

"This order shows the political will of the leaders of the two countries for developing and promoting the levels of cooperation in all fields," Dehghan said.

"The expansion of the two-way cooperation and the development of cooperation with other neighboring countries in various fields can be effective in establishing stability and security in the region," Dehghan said.

Meanwhile, a senior Russian government official said Monday that Russia has entered a barter deal -- starting to supply equipment, construction materials, and grain to Tehran, in exchange for crude oil.

Iran is the third largest buyer of Russian wheat, and Moscow and Tehran have been negotiating the barter deal for more than a year.

A deal worth up to $20 billion was on the table with Tehran, which had Russia buying up to 500,000 barrels of Iranian oil a day, in exchange for Russian equipment and goods, sources told Reuters more than a year ago.

The status of that deal has been unclear as officials from the two countries issued contradictory statements on whether a barter deal had been signed. But Russian Deputy Foreign Minister Sergei Ryabkov suggested one was already being implemented.

"I wanted to draw your attention to the rolling out of the oil-for-goods deal, which is on a very significant scale," Ryabkov told a briefing with members of the upper house of parliament on the Iran talks.

"In exchange for Iranian crude oil supplies, we are delivering certain products. This is not banned or limited under the current sanctions regime," Ryabkov said.

Ryabkov did not elaborate and Russia's Agriculture Ministry declined comment.

Iran has made no comment on news of a possible deal.

The next deadline to work out a detailed technical agreement under which Iran would limit its nuclear program and permit international control in exchange for a lifting of economic sanctions is in June.

"It takes two to tango. We are ready to provide our services and I am sure they will be pretty advantageous compared to other countries," Ryabkov said. "We never gave up on Iran in a difficult situation... Both for oil and gas, I think the prospects for our cooperation should not be underestimated."

He also reiterated Moscow's line that an arms embargo on Iran should be lifted once a final nuclear deal is sealed.