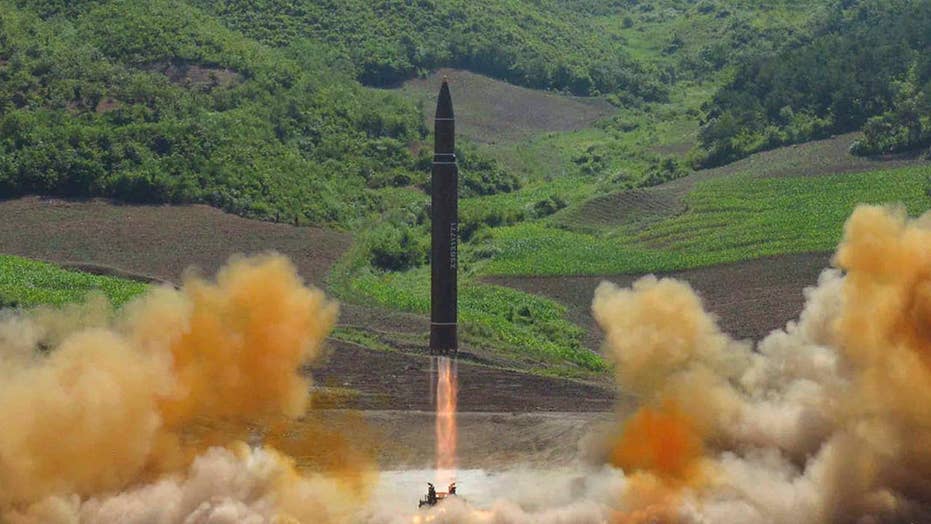 International condemnation has so far done nothing to stop the regime of Kim Jung Un from testing missiles and developing its nuclear program; senior correspondent Rick Leventhal reports from New York City

UNITED NATIONS – The United States vowed Wednesday to use military force to defend the country and its allies against a North Korean intercontinental ballistic missile if necessary, but said it prefers to use its clout in international trade to address the growing threat.

In a hard-hitting speech at an emergency meeting of the U.N. Security Council following Pyongyang's successful launch of an ICBM, U.S. Ambassador Nikki Haley said that "the world has become a more dangerous place" and China has a key role in promoting peace.

China is responsible for 90 percent of trade with North Korea and Haley warned that Beijing risks its massive trade with the United States if its business dealings with Pyongyang violate U.N. sanctions.

She said the United States doesn't seek conflict — "in fact we seek to avoid it." But she said the launch of an ICBM "is a clear and sharp military escalation" and the U.S. is prepared to use its "considerable military forces" to defend itself and its allies "if we must."

But Haley said the Trump administration prefers "not to go in that direction" but to use its "great capabilities in the area of trade" to address "those who threaten us and ... those who supply the threats."

Haley said she had a long conversation Wednesday morning with President Donald Trump about U.S. clout when it comes to trade.

Until recently, American officials had been describing China as a partner in their strategy to prevent North Korea from developing the ability to strike the U.S. mainland with nuclear weapons. But Trump has expressed growing irritation at Beijing's reluctance to tighten the screw on Pyongyang over its nuclear and missile programs.

"There are countries that are allowing, even encouraging trade with North Korea, in violation of U.N. Security Council resolutions," Haley said.

"Such countries would also like to continue their trade arrangements with the United States," she said. "That's not going to happen. Our attitude on trade changes when countries do not take international security threats seriously."

Haley said the seven U.N. sanctions resolutions haven't gotten North Korea to change its "destructive course," and she stressed that much of the burden of enforcing the resolutions rests with China because of its overwhelming trade with its neighbor.

Declaring that it's time to do more, Haley announced that the U.S. will put forward a new Security Council resolution in the coming days "that raises the international response in a way that is proportionate to North Korea's escalation."

She gave no details but said that if the council is united the international community can cut off major sources of hard currency to North Korea, restrict oil to their military and weapons programs, increase air and maritime restrictions, and hold senior officials accountable.

"If we act together we can still prevent a catastrophe," Haley said. "We can rid the world of a great threat. If we fail to act in a serious way there will be a different response."

China and Russia — whose presidents met in Moscow on Tuesday and will be attending the G20 summit with Trump in Hamburg, Germany, later this week where North Korea is certain to be a key issue — proposed a plan for defusing tensions on the Korean Peninsula that their ambassadors reiterated to the council.

The China-Russia plan includes a suspension-for-suspension — a North Korea moratorium on nuclear and missile tests while the United States and South Korea refrain from large-scale military exercises — and a roadmap to peace and denuclearization of the Korean Peninsula.

China's U.N. ambassador, Liu Jieyi, did not respond to Haley and made no mention of U.S.-China trade.

Instead, he strongly urged North Korea to stop "any rhetoric and action that might further exacerbate the tension of the Korean Peninsula."

"We call on all parties concerned to exercise restraint, avoid provocative actions and belligerent rhetoric, demonstrate the will for unconditional dialogue and work actively together to defuse the tension," Liu said. "China is firmly opposed to chaos and confrontation on the peninsula. Military means must not be an option in this regard."

Russian Deputy Ambassador Vladimir Safronkov echoed the call for "restraint rather than provocation and war mongering." He stressed that "any attempts to justify a military solution are inadmissible" and will lead "to unpredictable consequences for the region."

"Attempts to economically strangle North Korea are equally unacceptable as millions of people are in great humanitarian need," Safronkov said.

He also signaled that the United States will likely have a tough time getting Security Council approval for a new sanctions resolution.

"All must acknowledge that sanctions will not resolve the issue," Safronkov said. "In that manner, we simply rush towards a stalemate."

"Just as any attempts to resolve the situation through force are inadmissible," he said the international community needs to take into account North Korea's concerns for security.

Haley asked for the floor at the end of the debate and retorted: "If you are happy with North Korea's actions, veto it."

"If you see this for what it is which is North Korea showing its muscle, then you need to stand strong and vote with the international community to strengthen sanctions," she said.

"If you choose not to we will go our own path," Haley said. "But it makes no sense to not join together on this threat (from) North Korea. They have not had any care for Russia or China in this. ...They're not going to listen to anything that you say."

In her speech, Haley stressed that the United States "will not have patience for stalling or talking our way down to a watered-down resolution"