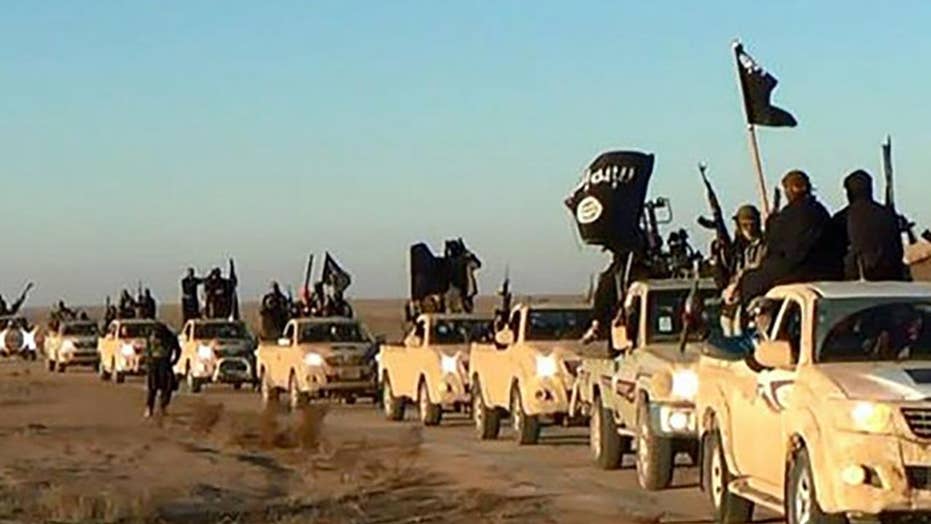 Bryan Llenas has the story for 'Special Report.'

U.S. military aircraft dropped more bombs in Afghanistan last month than against the Islamic State in Iraq and Syria, according to a new Air Force strike report from its Central Command headquarters in the Middle East, a sign the war against ISIS is winding down.

In March, U.S. jets and drones fired roughly 350 bombs and other munitions against the Taliban and an ISIS affiliate in Afghanistan. Meanwhile, in Iraq and Syria, the U.S. military dropped around 300 bombs against the last remnants of ISIS, as the terror army moves underground after losing tens of thousands of fighters.

THREAT OF FOREIGN TERRORISTS MORE GLOBAL THAN EVER, REPORT FINDS

U.S. officials claim most of the ISIS-affiliated fighters in Afghanistan are mostly Pakistani Taliban, who have pledged loyalty to the Islamic State, but are not receiving a great deal of material or monetary support from the group’s leaders.

Last week, American, French and British forces launched 105 missiles against three of Assad’s chemical weapons facilities in Syria following an alleged chemical weapons attack outside Damascus by the regime which killed more than 40 civilians, including women and children.  But the Pentagon says the mission in Syria remained the war against ISIS.

Tuesday, an American military spokesman warned ISIS had shown signs of life in areas controlled by the Assad regime and their Russian and Iranian backers.

Heather Nauert: US is in Syria to defeat ISIS

U.S. warns more airstrikes on Syria are possible. On 'America's Newsroom,' State Department spokeswoman says the U.S. has seen a series of Russian lies at the United Nations.

“In the pro-regime area west of the Euphrates River, we have seen a resurgence or rather some ISIS elements coming back and attacking with success,” said U.S. Army Col. Ryan Dillon, a spokesman for the U.S.-led coalition “There has been ISIS elements who have been able to come back and take territory as I mentioned some of the neighborhoods in southern Damascus.”

Col. Dillon refused to estimate how many ISIS fighters remain.