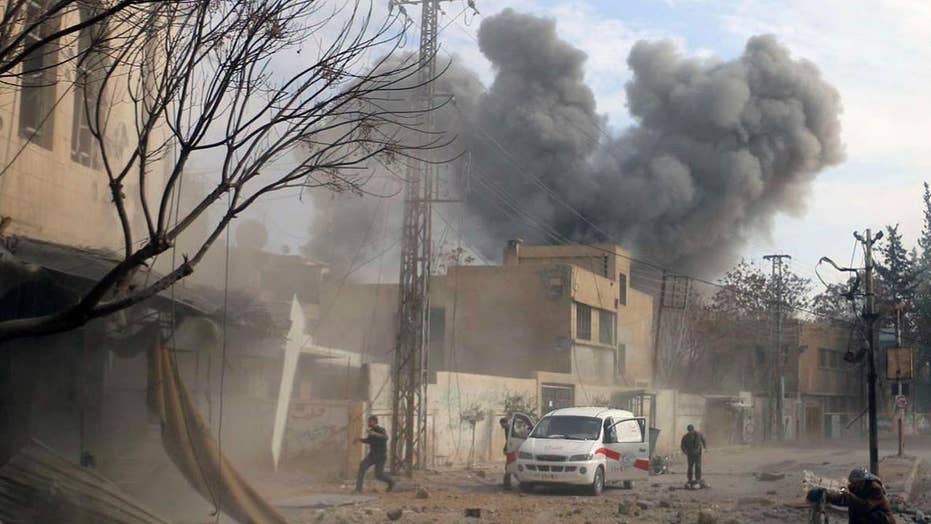 The U.S. military responded with overwhelming force in eastern Syria when Russian-backed fighters loyal to Assad began what the Pentagon is calling an unprovoked attack; Jennifer Griffin reports for 'Special Report.'

An American drone destroyed a Russian-made T-72 battle tank operating in eastern Syria on Saturday, according to the U.S. military's command unit responsible for forces in the Middle East -- which added the strike was in "self defense."

No U.S or allied troops were hurt in the incident, but three people inside the tank were killed by a U.S. MQ-9 Reaper drone, a defense official told Fox News on Tuesday.

The strike was the second by the U.S. against “pro-regime” forces since Wednesday, according to the U.S. military’s Central Command.

A Russian-made T-72 battle tank similar to the one destroyed Tuesday. (Reuters)

The U.S. airstrike took place the same day an Iranian drone was shot down over Israel on Saturday, prompting a counter-attack by the Israeli Air Force into Syria against Iranian and regime targets. An Israeli F-16 was shot down during that mission, and it crash landed inside Israeli territory.

"The tank had been maneuvering with coordinated indirect fire on a defensive position occupied by Syrian Democratic Forces and Coalition advisers," U.S. Central Command said in the statement. "The defensive position was within effective range of the tank's weapon system. Coalition officials maintained regular contact with Russian counterparts via established de-confliction lines to avoid misperceptions and miscalculations that could endanger each other's forces."

The latest U.S. airstrike came less than a week after a massive strike killed 100 "pro-regime" forces, including what defense officials told Fox News were Russian contractors.

In that incident, U.S. special operations forces and allied Syrian fighters came under attack by a group of 500 Assad regime-backed fighters equipped with tanks, artillery and mortars.

Four Russian nationals -- and potentially dozens more -- were killed in that assault, according to the New York Times, which cited Russian and Syrian officials.

The incident took place five miles across the Euphrates River near Deir ez Zoir, which serves as a “de-confliction” line between US and Russian/Syrian backed forces.