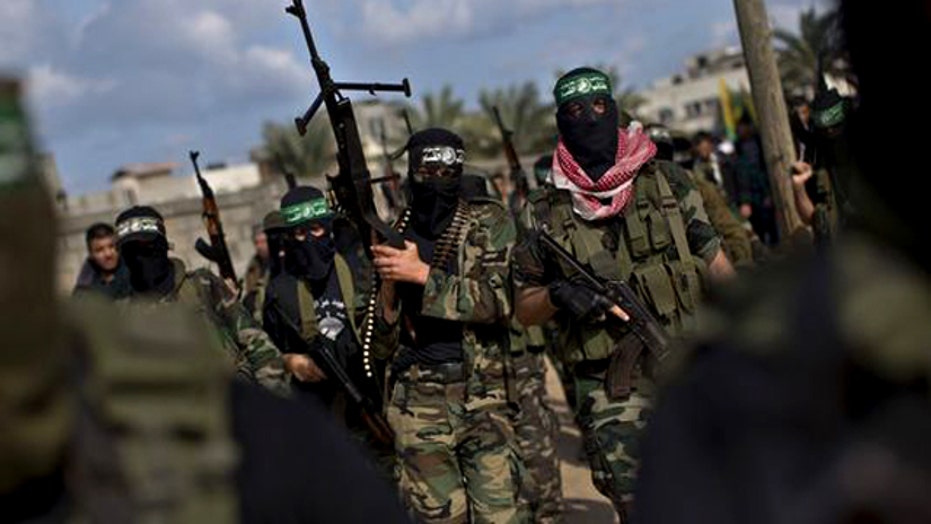 The Palestinian Authority's announcement that it will send 3,000 police officers to Gaza as part of a unity agreement with Hamas could mean U.S. taxpayers are now at least indirectly helping an officially designated terror organization maintain law and order -- and its grip on power.

The police deployment came as part of a deal between the mainly secular government of the West Bank and the radical Islamist regime of Hamas that rules in Gaza. That agreement effectively ended hopes for the Israeli-Palestinian peace process championed by U.S. Secretary of State John Kerry, but it also raises questions about U.S. foreign aid to the Palestinian Authority going forward. Since the U.S. subsidizes the PA budget to the tune of approximately $400 million per year, any effort to help Hamas indirectly spends U.S. dollars, say observers in Israel. That could be prohibited by U.S. policy, if it is read as part of a power-sharing agreement.

“No aid is permitted for a power-sharing PA government that includes Hamas as a member, or that results from an agreement with Hamas and over which Hamas exercises “undue influence,” unless the President certifies that the PA government, including all ministers, has accepted the following two principles... (1) Recognition of “the Jewish state of Israel’s right to exist” and (2) acceptance of previous Israeli-Palestinian agreements,” Jim Zanotti, a specialist in Middle Eastern Affairs, wrote in a report last September for the Congressional Research Service titled “U.S. Foreign Aid to the Palestinians."

Those conditions have been met by the PA, but Hamas, under whose control Gaza has continued to be a launching pad for cross-border missile attacks into Israel and a safe haven for Islamic Jihad and even Al Qaeda, steadfastly refuses to acknowledge Israel’s right to exist and is reportedly pressuring the PA to cease security co-operation with Israel in the West Bank. Zanotti’s report, however, highlights a clause that might leave wiggle room for the PA to avoid losing U.S. support.

The emerging bond between the PA and Hamas has Western diplomats concerned and Israel outraged. Today, PA President Mahmoud Abbas and Hamas leader Khaled Meshaal met face-to-face in Doha, Qatar, for the first time in 16 months, in a further sign of the warming relationship between the two parties. AFP reported a Palestinian official as saying, "The meeting was positive, with both leaders expressing a serious willingness to turn over a new leaf based on national partnership.”

In his recent interview with Fox News just a day after the new PA-Hamas rapprochement was announced, Israeli Prime Minister Benjamin Netanyahu -- whose refusal to release the final batch of convicted Palestinian terrorists from Israeli custody was blamed by the Palestinians for finally derailing the peace talks -- was scathing in his criticism of PA President Mahmoud Abbas.

Jonathan Schanzer, author of the recently published book, State of Failure: Yasser Arafat, Mahmoud Abbas and the Unmaking of the Palestinian State, told Fox News.com a power-sharing deal between the two factions, if reached, would warrant a move by the U.S. to cut aid. Kerry has not commented on whether the U.S. agrees.

“Proponents of the recent reconciliation process insist that the next step is a technocratic government that would include figures approved by Hamas and Fatah," he said. "But they insist that this is not grounds for cutting aid -- that only an elected national unity government would prompt such a cut. The integration of Hamas and PA security forces would destroy this argument. Until the integration of these forces, U.S. funds are not used to aid Hamas. However, the moment this happens, it is grounds for a full cut in assistance.”

Abd al-Salam Siyam, secretary-general of the Hamas cabinet in Gaza, announced Sunday in a carefully worded official statement that the security officers would be deployed in Gaza for an “interim period” as a step toward the unity agreement between the two Palestinian factions. Reports suggest that many of the 3,000 PA men heading to Gaza had previously been involved in security in the territory prior to the election of Hamas in 2006 and the subsequent internal blood-letting and mass murders that followed Gaza’s lurch toward a radical Islamic regime.

“Reconciliation is positive in the sense that it would solve the problem of identifying the interlocutor on the Palestinian side” Schanzer suggests. “But it is virtually impossible to imagine peace between the Palestinians and Israelis when Hamas is involved. In other words, Fatah’s embrace of Hamas may lead to national unity, [but] it portends poorly for peace.”

Paul Alster is an Israel-based journalist who can be followed on Twitter @ paul_alster and at www.paulalster.com