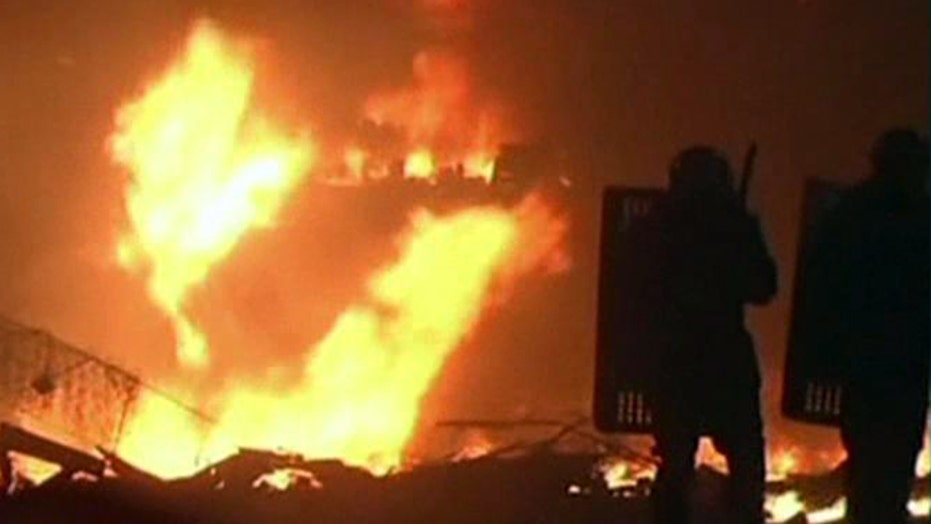 What 'costs' can US threaten Russia with?

At the White House, President Obama said the U.S. government is "deeply concerned" by reports of Russian "military movements" and warned any violation of Ukraine's sovereignty would be "deeply destabilizing."

"There will be costs" for any military intervention, he said, without specifying what those costs might be.

U.S. officials told Fox News they see “evidence of air and maritime movement into and out of Crimea by Russian forces” although the Pentagon declined to officially "characterize" the movement.

Agence France Press quoted a top Ukranian official as saying Russian aircraft carrying nearly 2,000 suspected troops have landed at a military air base near the regional capital of the restive Crimean peninsula.

"Thirteen Russian aircraft landed at the airport of Gvardeyskoye (near Simferopol) with 150 people in each one," Sergiy Kunitsyn, the Ukrainian president's special representative in Crimea, told the local ATR television channel, according to AFP. He accused Russia of an "armed invasion."

The new developments prompted Ukraine to accuse Russia of a "military invasion and occupation" -- a claim that brought an alarming new dimension to the crisis.

Mike Rogers, chairman of the House Select Committee on Intelligence, issued a statement late Friday saying, "It appears that the Russian military now controls the Crimean peninsula.  This aggression is a threat not only to Ukraine, but to regional peace and stability.  Russia’s latest action is yet another indicator that Vladimir Putin’s hegemonic ambitions threaten U.S. interests and allies around the world."

Russia kept silent on claims of military intervention, even as it maintained its hard-line stance on protecting ethnic Russians in Crimea, a peninsula of Ukraine on the northern coast of the Black Sea.

A spokesman for the Ukrainian border service said eight Russian transport planes have landed in Crimea with unknown cargo.

Serhiy Astakhov told The Associated Press that the Il-76 planes arrived unexpectedly Friday and were given permission to land, one after the other, at Gvardeiskoye air base, north of the regional capital, Simferopol.

Astakhov said the people in the planes refused to identify themselves and waved off customs officials, saying they didn't require their services.

Earlier in the day, Russian armored vehicles rumbled across Crimea and reports surfaced of troops being deployed at airports and a coast guard base – signs of a more heavy-handed approach to the crisis from Moscow.

Ukraine's U.N. ambassador Yuriy Sergeyev told the U.N. Security Council that Russian military helicopters and transport planes are entering his country, that neither major airport in Ukraine is under national control and that the main airport was "captured by Russian armed forces."

He claimed 11 Russian military helicopters had been brought in along with M-24 military transport planes.

Armed gunmen took control of the two main airports in Crimea Friday. However, Russia has so far been silent on the claims of military involvement. No violence was reported at the civilian airport in Crimea's capital of Simferopol or at the military airport in the Black Sea port of Sevastopol, also part of Crimea. At the Simferopol airport, a man claiming to speak for the camouflage-clad forces patrolling the airport described them as Crimean militiamen.

Yanukovych warned of the dangers of “irresponsible Western policy” as he vowed to continue the fight for Ukraine’s future Friday at a press conference in Rostov-on-don, Russia—his first public appearance since last Saturday.

"I intend to keep fighting for the future of Ukraine against those who are using fear and terror to seize the country," he told reporters.

The fugitive leader said he was forced to leave Ukraine due to threats, Reuters reported. He blamed the country’s crisis on “irresponsible Western policy,” and said he trusted the "decency of Western mediators” when he signed a peace deal last week brokered by members of the European Union. But recent actions by the opposition run counter to the agreement, he said.

Yanukovych said he does not plan to ask Russia for military support in dealing with the crisis in Ukraine, where he said power was stolen by ``a bunch of radicals.”

"Fascist hooligans" have taken power in Ukraine, Yanukovych told reporters, according to the BBC.

Reuters and the Associated Press contributed to this report.