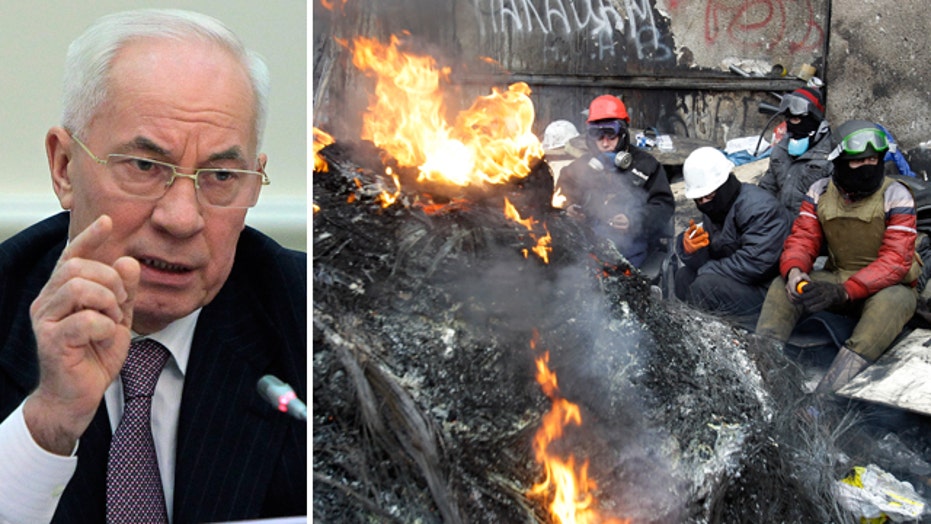 Ukraine's lawmakers are considering granting amnesty to protesters arrested during weeks of demonstrations in the crisis-torn country.

The parliament will consider two amnesty proposals on Wednesday, one of which would make the amnesty conditional on demonstrators leaving the streets and vacating the government buildings that they occupy, the BBC reported.

Some of the possible conditions attached to it would be unacceptable to the opposition.

The amnesty bill is part of a series of concessions from embattled President Viktor Yanukovych, after a week of street clashes between police and protesters and protesters' seizure of government buildings in western Ukraine. The prime minister has resigned and harsh anti-protest laws have been recalled, but those moves did not address the protesters' other key demands that Yanukovych resign and early elections be held.

Two amnesty proposals were up for a parliamentary vote Wednesday, one of which says amnesty would be granted only if demonstrators leave their massive street protests and vacate buildings they now occupy. Parliament was also discussing a political reform, sought by the opposition, which would strengthen the government at the expense of the presidency.

Opposition leader Arseniy Yatsenyuk said the protesters will not agree to leave the streets in exchange for an amnesty and wanted the condition dropped.

Over the course of two months, anti-government protesters have established a large tent camp in the main square of Kiev, called the Maidan, and seized three buildings nearby as operation centers and sleeping quarters. They have also constructed large barricades of ice, wood, furniture and other materials.

"They have set a number of conditions, and the key condition under the draft bill is to let the Maidan go and only afterwards all protesters will get an amnesty," Yatsenyuk said. "This is unacceptable for us."

But Vadim Kolesnichenko, a lawmaker with Yanukovych's Party of Regions, said the government is ready to grant amnesty only after protesters clear the streets and vacate the government buildings. Under a government-backed bill, the opposition will have 15 days to do that.

Out on the streets of Kiev, one group of protesters clashed with another Wednesday in bid to free a government building that they had seized. At least two protesters were injured.

Andriy Khoronets, an activist with the Svoboda party, which represents more moderate protesters, tried to force members of the more militant Spilna Sprava group to vacate the Agriculture Ministry building as part of a compromise with the government.

"We must be seen as people who can fulfill one's obligations," Khoronets told The Associated Press outside the building. "There should be no anarchy."

Kolesnichenko, the government supporter, criticized opposition leaders for not being able to control their more radical factions.

"I am surprised by the statement of the opposition leaders that they don't know how to influence the radicals," Kolesnichenko said, according the party's website. "Then who runs the Maidan, the U.S. Embassy? Then you [opposition] must walk out of the negotiations."

The protests erupted after Yanukovych turned down a deal in November with the European Union in favor of getting a $15 billion bailout from Russia, but they have since shifted to demanding more human rights, less corruption and more democracy in this nation of 45 million.