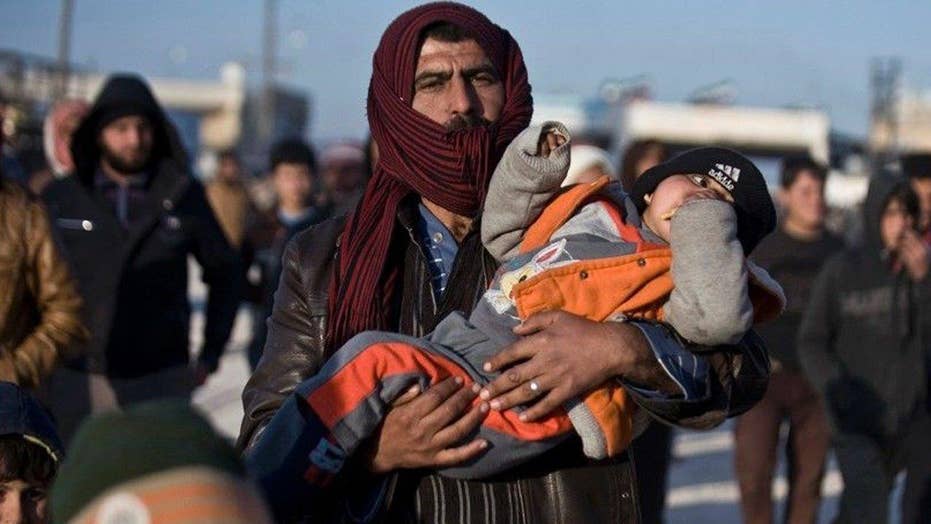 Syrian opposition groups frustrated with lack of US help

KILIS, Turkey – Turkey's leaders lashed out Wednesday at the United Nations and others who are pressing the country to open its border to thousands more Syrian refugees, accusing them of failing to shoulder the refugee burden or stop the Russian bombings that have triggered the exodus.

The civil war in Syria has killed more than 250,000 people and forced millions to flee their homes since it began in 2011. In recent days, a Russian-backed Syrian government offensive around the city of Aleppo has sent tens of thousands of people fleeing to the Turkish border.

Turkey has taken in some 3 million refugees -- including more than 2.6 million Syrians -- making it the country with the world's largest refugee population. Turkey has not, however, allowed the latest wave of refugees in, providing them instead with assistance at displaced persons camps on the Syrian side of the border.

That prompted the U.N. refugee agency, UNHCR, on Tuesday to call on Turkey to admit "all civilians who are fleeing danger and seeking international protection."

At a news conference Wednesday with his Dutch counterpart in The Hague, Turkish Prime Minister Ahmet Davutoglu called the U.N. Security Council and the international community "two-faced" for demanding that Turkey open its borders while not moving "a finger to solve the Syrian crisis" or to stop the Russian bombings.

Davutoglu also said the Syrian and Russian military operations were an attempt to drive out people who don't support the government of Syrian President Bashar Assad.  By taking in the refugees that have fled Aleppo, he said Turkey would be indirectly contributing to what he called Syria's "ethnic cleansing."

"With every refugee that we accept, in a way, we would be contributing to this ethnic cleansing aim," Davutoglu said. "If this is a strategy to change the demography in Syria, then we all have to be vigilant against it."

In Ankara, Turkish President Recep Tayyip Erdogan said the U.N. had sent $455 million to Turkey to help with refugees compared to the $10 billion that Turkey had spent on the refugees since 2011.

"What does the U.N. say? `Open your border to the refugees.' What are you for then? What is your use?" Erdogan asked. "We have taken 3 million Syrians and Iraqis into our home until now. How many did you take?"

Turkey's Oncupinar border crossing, opposite the Bab al-Salameh gate in Syria, has been closed since Friday, with only ambulances and aid trucks being allowed to cross.

The governor of the border province of Kilis, Suleyman Tapsiz, said Turkey had allowed in 12 Syrians who were seriously injured in the Russian and Syrian bombings near the town of Tel Rifaat in northern Syria. One of them died while the others were in stable condition, he told NTV television.

The governor denied accusations that Turkey had closed its border to the refugees, insisting instead that it had chosen to assist the new arrivals at the displaced peoples' camps just across the border, but would admit them if the need arises later.

"Our doors are not shut," Tapsiz said. "There is no need to take them in because all of their needs are being taken care of."

Tapsiz acknowledged that conditions on the other side of the border were "difficult," but said the camps were constantly being improved and new ones were under construction.

Davutoglu on Wednesday also warned of a looming humanitarian disaster after Russian and Syrian military operations closed a vital humanitarian aid corridor between Turkey and Aleppo.

"The corridor has been closed because of the attacks of these barbaric forces," Davutoglu said. "If this corridor is not opened, hundreds of thousands of Syrians who don't have the opportunity to reach Turkey face hunger."

Dutch Prime Minister Mark Rutte said his country appreciated the "very careful way of working Turkey chooses to prevent an uncontrolled entry" of refugees from Syria. He said the Netherlands and Germany had offered to help the refugees on the Turkish side of the border.

"Finger-pointing serves no purpose," he said. "I believe that Turkey has a sensible policy here."

Doctors Without Borders said Tuesday that about 23,000 new arrivals fleeing the fighting in Aleppo were in urgent need of emergency shelter and support near the border with Turkey. It said it had increased the number of hospital beds in the Azaz district from 28 to 36 and was preparing to expand if needed. The group says it has distributed hundreds of blankets, tents, mattresses and other supplies.

Meanwhile, Turkey's state-run agency Anadolu Agency said military officials detained a group of 34 people at the border with Syria and seized luggage containing four suicide vests and explosives. Citing unnamed security sources, Anadolu said four men, 10 women and 20 children were stopped near the town of Oguzeli in Gaziantep province. Anadolu said security forces had acted on a tip about plans to smuggle explosives across the border.

The luggage contained up to 15 kilograms (33 pounds) of explosives. The report didn't say whether authorities believe the group may be linked to Islamic State extremists.