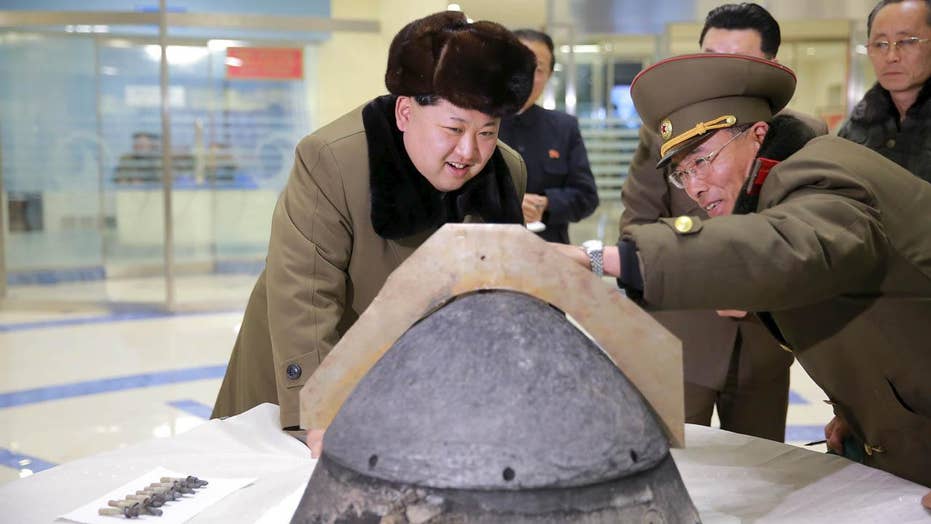 The nuclear warhead can fit inside missiles

President Donald Trump responded to reports of North Korea's nuclear threats on Tuesday, saying the regime "will be met with fire, fury and frankly power, the likes of which the world has never seen before."

Speaking from New Jersey, Trump also said North Korean leader Kim Jong Un "has been very threatening beyond a normal state," adding that the regime "best not make any more threats to the United States."

The president's comments follow a report that North Korea has produced a compact nuclear warhead that can be placed inside one of its advanced missiles – which are already believed to be capable of reaching half of the United States. Fox News has confirmed the report, which first appeared in the Washington Post.

The jarring assessment was prepared in July by the Defense Intelligence Agency (DIA). The Post was read parts of the DIA analysis and the document was verified by other U.S. officials, the newspaper reported.

Dan Coats, director of national intelligence, made similar comments to Congress in May.

“Kim was also photographed beside a nuclear warhead design and missile airframes to show that North Korea has warheads small enough to fit on a missile," Coats said at the time.

“The [intelligence community] assesses North Korea has produced nuclear weapons for ballistic missile delivery, to include delivery by ICBM-class missiles,” an excerpt of the DIA analysis stated.

Further, it is now believed that dictator Kim Jong Un may control up to 60 nuclear weapons.

The DIA report echoed some of the evaluations made in a lengthy Japanese defense white paper also revealed on Tuesday.

The miniaturization of a nuclear warhead was one of three things U.S. officials said the regime needed to do in regards to their long-range missile tests.

Officials said North Korea also needed to be able to hit a target and demonstrate the ability to "re-enter" the earth's atmosphere.

The regime has conducted 12 tests so far this year. One of the ICBM tests conducted in late July, in which a missile traveled 2,300 miles into space and 45 minutes into the air, was the longest and farthest ballistic missile test in the history of North Korea, officials told Fox News at the time.

"North Korea CAN miniaturize nuclear weapons for use on ballistic missiles," leading North Korea expert Mark Fitzpatrick told Fox News. "North Korea has been working on miniaturizing a war head for 30 years now." Fitzpatrick continued, saying that the regime is "very technically competent. It is natural that they should achieve this."

Regarding the Post's claim that the regime has up to 60 nuclear weapons, Fitzpatrick thinks that number is high and believes the number is closer to the 20-30 that others have estimated.

Reactions to the news highlighted the stunning advancements depicted in the reports. Some of those who've tangled with North Korea in the past advocated throwing diplomacy to the wayside.

"We’ve been playing the diplomatic game for a long time with #NorthKorea and it’s only given them time to advance their weapons program," former U.S. Ambassador to the United Nations John Bolton tweeted.

But the U.S. on Saturday achieved what appeared to be a remarkable diplomatic victory, securing the unanimous approval of tough new sanctions -- including votes from Russia and China.