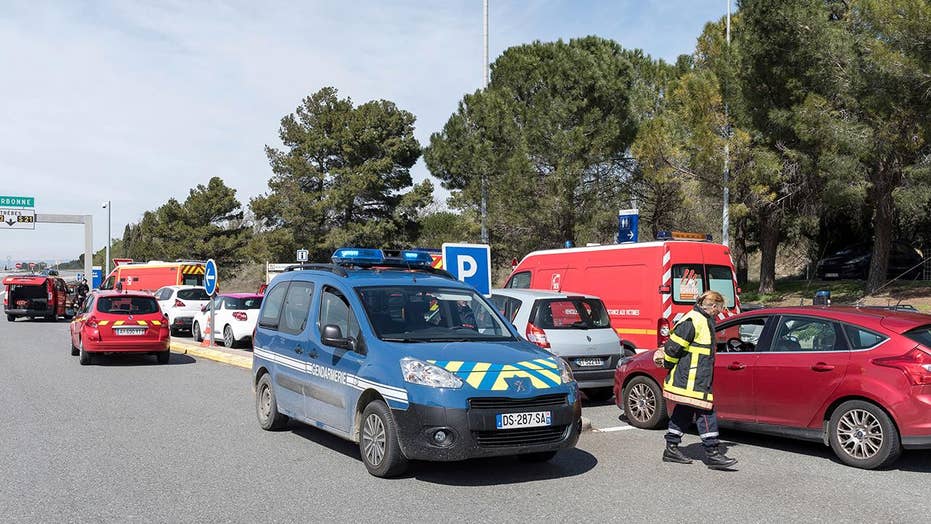 Three homemade explosive devices were found inside a supermarket that was the site of a deadly attack by a man calling himself “a soldier” for ISIS, a French official said, as President Trump condemned “the violent actions.”

Investigators also found a 7.65-caliber handgun and a hunting knife inside the Super U market in the southern French town of Trebes, about 60 miles from Toulouse.

It wasn't clear whether the knife and handgun found were the weapons he wielded when entering the supermarket.

Four people were killed in the hours-long attack Friday when a gunman, reportedly yelling “Allahu Akbar,” went on a rampage before barricading himself inside the supermarket.

The 25-year-old Morocco-born attacker, identified as Radouane Lakdim, was killed when special police stormed into the market hours later.

One of the victims was a French police officer who swapped himself for a hostage. At least 15 others were injured in the attack.

Two people were detained for alleged links to a terrorist enterprise, one woman close to Lakdim and a 17-year-old male friend of his, Paris prosecutor's office said.

Mayor Eric Menassi of Trebes, a town of 6,000, said people there were forever marked.

"There will be a before and an after ... yesterday we were able to measure how much radicalism can affect anyone," he said.

“Our thoughts and prayers are with the victims of the horrible attack in France yesterday, and we grieve the nation’s loss," he tweeted. “We also condemn the violent actions of the attacker and anyone who would provide him support. We are with you Emmanuel Macron!” he added.

Trump and French President Emmanuel Macron are meeting in Washington on April 24 for the first state visit of Trump's presidency. The French leader, who has already put in place stronger police measures since being elected in May, is expected to address a joint session of Congress the following day.

The IS-linked Aamaq news agency said the attacker was responding to the group's calls to target countries in the U.S.-led coalition carrying out airstrikes against IS militants in Syria and Iraq since 2014. France has been repeatedly targeted because of its participation.

France has been on high alert since a series of extremist attacks in 2015 and 2016 killed more than 200 people.