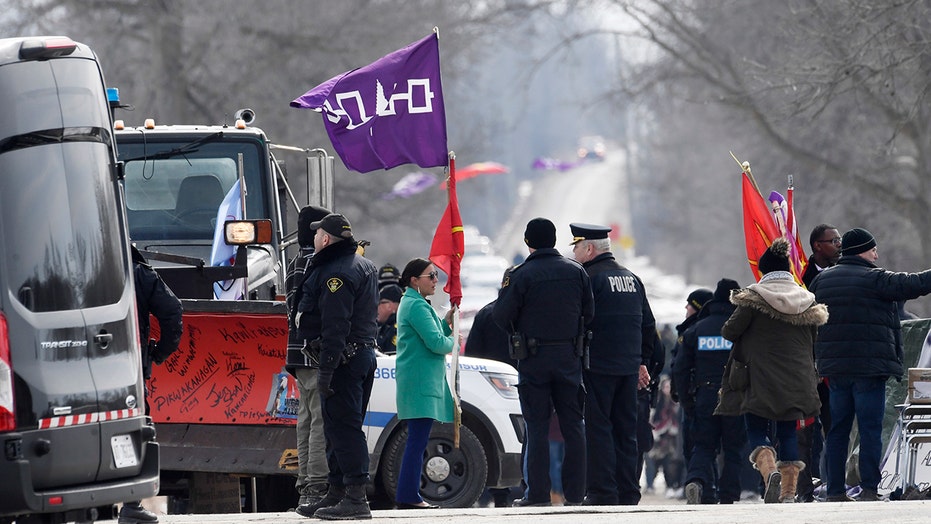 Canadian Prime Minister Justin Trudeau’s government cleared an ongoing impasse with indigenous chiefs who’ve now agreed to meet Thursday to negotiate an end to weeks of railway blockades that triggered cancellations for thousands of passengers, layoffs and sparked fears of food and supply shortages across the country.

Blockades on strategic railway points across the country began to pop up in early February after Wet’suwet’en Nation hereditary chiefs growingly pushed back on the construction of a $5 million Coastal GasLink pipeline project that crosses their traditional territory in northwestern British Columbia.

People raise their hands and drums as they rally in solidarity with Wet'suwet'en hereditary chiefs opposed to the Costal GasLink Pipeline, in Ottawa, on Monday, Feb. 24, 2020. (Justin Tang/The Canadian Press via AP)

The chief initially demanded all construction at the Coastal GasLink pipeline be discontinued and all Royal Canadian Mounted Police (RCMP) presence leave their territory before talks began. Trudeau's government asked the Wet’suwet’en Nation to call for an end to blockades across the country before entering talks. But the Wet’suwet’en chiefs declined, arguing, under indigenous law, they cannot tell other indigenous nations what to do in their own territories.

JUSTIN TRUDEAU: 5 CANADA CONTROVERSIES THAT HAVE RATTLED HIS LEADERSHIP

“We had hoped the hereditary chiefs would agree to a period of peace and respect during the talks, which would include encouraging their supporters to remove blockades,” he said, according to Global News Canada.

Bennett also told reporters Wednesday she has reached out to Wet’suwet’en hereditary chiefs and was hoping to get a response from them on whether they’d extend an invitation to her and her British Columbia counterpart to meet to discuss ongoing anti-pipeline protests and rail blockade, CPAC-TV, Canada’s 24/7 Politics TV, reported.

In Parliament Monday, Trudeau was slammed by Conservative Party leader Andrew Scheer for caving to “radical leftists” by waiting 19 days before finally clearing police to enforce a court-ordered injunction to remove demonstrators from the tracks, The New York Times reported. Trudeau faced criticism as the blockades led to transport cancellations for hundreds of thousands of passengers this month, and prompted supply shortages and layoffs for at least 1,000 railway employees.

“It’s a new day, and we started it by burning the injunction delivered by CN rail!” a Facebook group named Wet’suwet’en Strong: Hamilton in Solidarity, which claimed responsibility for the blockade, wrote in an online update Tuesday, National Post reported. “Remember why we’re out here; the violence the state has perpetrated towards Indigenous land defenders and their supporters, the forced removal and criminalization of Indigenous people from their lands.”

Police descended on a rail blockade in Tyendinaga Mohawk Territory in central Ontario on Monday morning, enforcing the court injunction ordered earlier this month on behalf of the Canadian National Railway (CN) to clear the tracks. They arrested 10 people – all of whom have since been charged and released, according to BBC. The Mohawk First Nation met with Wet'suwet'en Nation on Friday to work together to continue their blockade effort.

People walk on Kent Street in Ottawa at a rally in solidarity with Wet'suwet'en hereditary chiefs opposed to the Costal GasLink Pipeline, on Monday, Feb. 24, 2020. (Justin Tang/The Canadian Press via AP)

But by Monday night, GO Train passenger rail service in Hamilton and all points on the route to Niagara Falls, Ontario, had been halted, Metrolinx spokeswoman Anne Marie Aikins said. Thousands of passengers were left scrambling to make alternative travel plans amid numerous delays and cancellations after protesters had set fire to the tracks.  Shuttle buses were running to help commuters, according to the Associated Press.

Hamilton police said Tuesday they had no plans to move in on the small group of demonstrators camped out on the tracks near a Canadian National Railway Co. depot.

“It is extremely concerning to see people endangering their own lives and the lives of others by trying to interfere with the trains,” Trudeau told reporters Wednesday. “We are continuing to work very hard to resolve this quickly.”

Last week, Trudeau said, according to BBC, that all blockades "must come down and the injunctions much be obeyed and the law must be upheld.” Until Monday, police had held off from using force against protesters to clear railway tracks for weeks. Wet’suwet’en hereditary chiefs had initially ignored government requests to meet to negotiate.

The organized blockades on strategic railway points began Feb. 6 in response to the government’s plan to build a $5 billion Coastal GasLink natural gas pipeline stretching about 416 miles long, crossing some part of the traditional territory of the Wet'suwet'en First Nation near Houston, British Columbia. The protests at railways came in response to the Royal Canadian Mounted Police (RCMP) raiding camps set up by the Wet’suwet’en Nation at the pipeline construction site. Dozens were arrested in that raid.

A woman speaks with Ontario Provincial Police officers as she removes flags from a rail blockade in Tyendinaga Mohawk Territory, near Belleville, Ont., on Monday Feb. 24, 2020, during a protest in solidarity with Wet'suwet'en Nation hereditary chiefs attempting to halt construction of a natural gas pipeline on their traditional territories. (Adrian Wyld/The Canadian Press via AP)

Earlier this month, about a week after the organized blockades began, VIA Rail, a passenger rail service that primarily runs on CN’s tracks, suspended service for on 150 trains that traveled between Toronto, Ottawa and Montreal. The company also instated temporary layoffs for its employees, Globe and Mail reported. Service was suspended after CN announced it was shutting down its lines in eastern Canada after authorities failed to enforce court orders to end “illegal” blockades across Ontario, Manitoba, and British Columbia.

About 250,000 passengers had already faced cancellations after a massive demonstration blocked VIA Rail’s major line in the Montreal-Toronto-Ottawa triangle, the Wall Street Journal reported.

Construction began on the Coastal GasLink natural gas pipeline is 2012 after the developed reached agreements with 20 elected indigenous councils along the planned route, including some Wet'suwet'en councils, BBC reported. But Wet'suwet'en hereditary chiefs argue elected councils had no jurisdiction to approve the project – and the chiefs are the ones to make decisions on larger projects that expand into traditional lands beyond their reservations. Over the past eight years, protesters have periodically erected camps at pipeline construction sites.