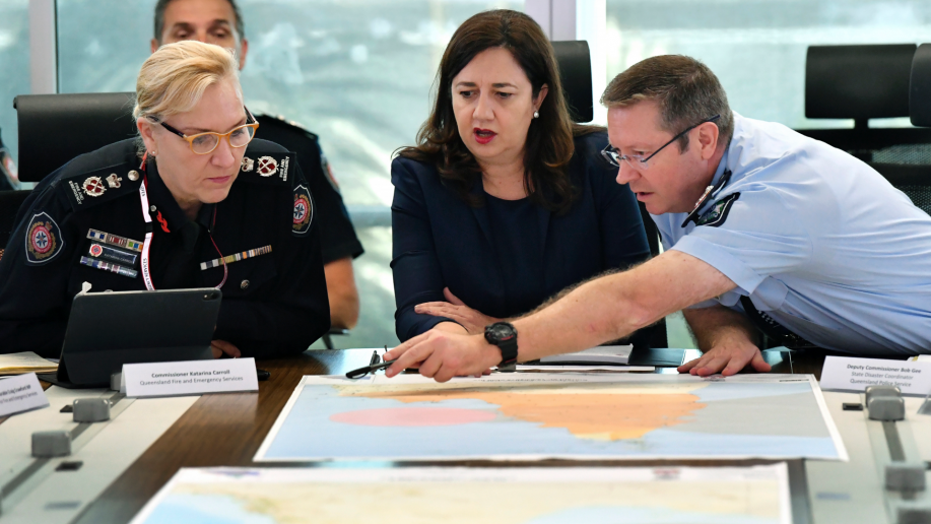 The identity of an officer with the Australian Security Intelligence Organization (ASIO) was mistakenly published by a top Australian politician -- a national security breach that is punishable by up to 10 years in prison.

The name of the intelligence operative was inadvertently published by Queensland premier Annastacia Palaszczuk’s office as part of the routine public release of her diaries.

Releasing the identity of an intelligence officer is a crime punishable by up to 10 years in prison on the grounds that it could compromise them or even turn them into targets by foreign intelligence services, the Guardian reported.

In this March 19, 2019, photo, Queensland Fire and Emergency Services Commissioner, Katarina Carroll (left), Queensland Premier Annastacia Palaszczuk (center) and Queensland Police Deputy Commissioner Bob Gee (right) are seen during a meeting of the Queensland Disaster Management Committee discussing the approaching cyclone at the Emergency Services Complex in Brisbane. Australia is evacuating about 2,000 people from part of northern Australia ahead of powerful Cyclone Trevor expected to hit on Saturday. (Darren England/AAP Image via AP)

The diary entry has been scrubbed from the Internet but, prior to the controversy, it remained available for about a month.

The premier’s office told the Guardian that the publication of the officer’s name was “an administrative error.”

“It has been removed,” a spokesman said. “We apologize and have taken steps to ensure it doesn’t happen again.”

Opposition lawmakers have jumped on the issue and have demanded an investigation into the matter, accusing the premier of compromising national security.

In recent years, Australia has been particularly aggressive in pursuing the prosecution of individuals who disclose classified intelligence information.

Two whistleblowers were recently prosecuted for disclosing such sensitive information, which included information about an illegal spying operation conducted by an intelligence officer, who’s now also facing a prison sentence.