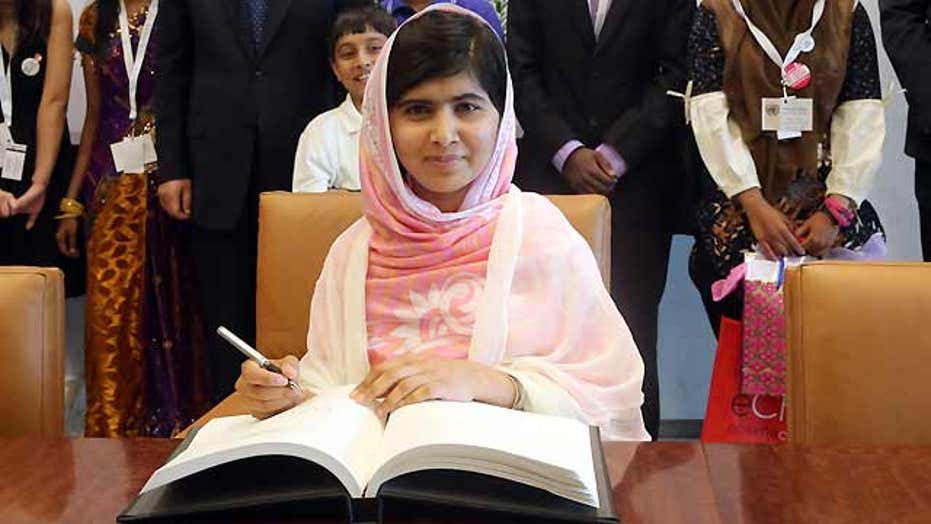 PESHAWAR, Pakistan (AFP) – A senior Pakistani Taliban commander has written to Malala Yousafzai, the teenage activist shot by militants, accusing her of "smearing" them and urging her to return home and join a madrassa.

Gunmen from the Tehreek-e-Taliban Pakistan (TTP) shot Malala, now 16, in the head in her home town in Swat, in the country's northwest, where she campaigned for the right of girls to go to school, last October.

Malala made a powerful speech to the UN on Friday in her first public appearance since the attack which almost killed her, vowing to continue her struggle for education and not be silenced by the militants.

In an open letter released Wednesday, Adnan Rasheed, a former air force member turned TTP cadre, said he personally wished the attack had not happened, but accused her of running a "smearing campaign" against the militants.

"It is amazing that you are shouting for education, you and the UNO (UN) is pretending that you were shot due to education, although this is not the reason ... not the education but your propaganda was the issue," Rasheed wrote.

"What you are doing now, you are using your tongue on the behest of the others."

The letter, written in English, was sent to reporters in northwest Pakistan and its authenticity confirmed to AFP by a senior Taliban cadre who is a close associate of Rasheed. It is understood Malala has not received the letter herself.

He accused Malala of seeking to promote an education system begun by the British colonialists to produce "Asians in blood but English in taste" and said students should study Islam and not what it called the "satanic or secular curriculum".

"I advise you to come back home, adopt the Islamic and Pashtun culture, join any female Islamic madrassa near your home town, study and learn the book of Allah, use your pen for Islam and plight of Muslim ummah (community)," Rasheed wrote.

He said he had originally wanted to write to Malala to warn her against criticising the Taliban when she rose to prominence with a blog for the BBC Urdu service chronicling life under the militants' 2007-9 rule in Swat.

The Taliban have destroyed hundreds of schools across northwest Pakistan, an area on the frontline of the country's bloody struggle against Islamists.

But Rasheed said the attacks were necessary because government forces used schools as hideouts and bases.

"Nobody will believe a word the Taliban say about the right of girls like Malala to go to school until they stop burning down schools and stop massacring pupils," said Gordon Brown, the former British prime minister and now UN Special Envoy for Global Education, who has supported Malala since she was shot.

While Malala's brave fight back from her injuries and speech at the UN have inspired people around the globe to back her campaign for children to go to school, the response to her in Pakistan has been mixed.

Many have hailed her as a national hero but others have criticised her for promoting a "Western" agenda.

Rasheed was sentenced to death over a 2003 attack on Pakistan's then military ruler General Pervez Musharraf but escaped from custody in a mass jailbreak in April last year.