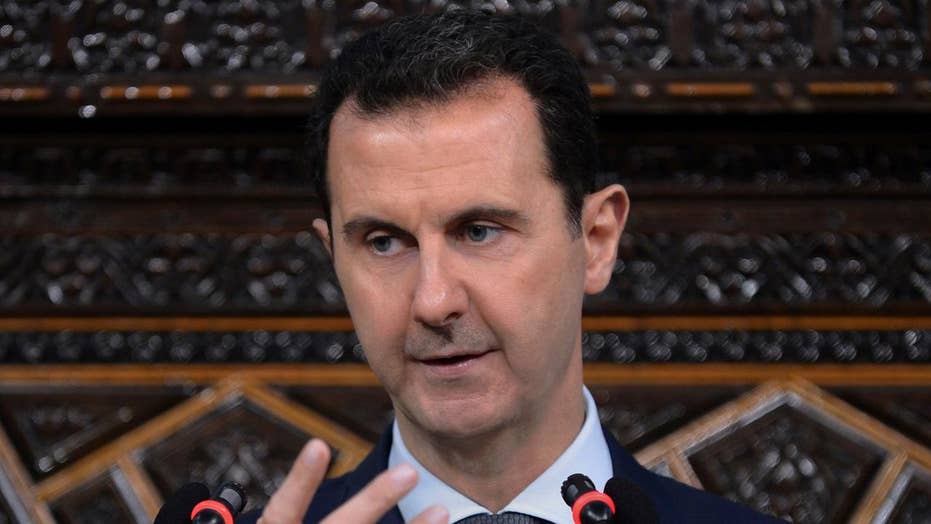 Russia, Iran back Syria against US action

Rubio, a Republican, said he was troubled by reports that both Iran and Russia were complicit in Bashar Assad’s chemical weapons program. While the Trump administration accused Moscow of covering up the Syrian regime's chemical weapons attack, the U.S government has not mentioned Iran's possible role.

“Congress and the White House should work together to hold the Assad regime accountable for its war crimes and impose harsh sanctions against its enablers,” Rubio told Fox News.

Mounting evidence shows Iran’s regime enabled Assad to develop a lethal gas program that he used on civilians earlier this month and in 2013. Assad’s Air Force dropped the poisonous gas sarin on the rebel-held town of Khan Sheikhoun in April, killing more than 80 people, many of them children.

IRAN ISSUES THREAT OVER US STRIKES IN SYRIA

In response to Assad’s chemical attack, the U.S. launched 59 Tomahawk missiles at the Shayrat Air Base, which served as the departure point for planes carrying the deadly nerve agent. Iran’s Revolutionary Guard Corps and the Lebanese militia group Hezbollah have long used the Shayrat Air Base, experts say.

Reuters reported on Wednesday that Ahmet Uzumcu, the director-general of the Organization for the Prohibition of Chemical Weapons, said the attack in Khan Sheikhoun "indicate that sarin or a sarin-like substance was used.”

Iran sided with Russia's denial that the Syrian regime did not use chemical weapons.  Iran's foreign ministry spokesman Bahram Ghasemi said the “unilateral action is dangerous, destructive and violates the principles of international law.”

The British publication Jane’s Defense Weekly reported in 2005 that the Islamic Republic of Iran worked with Assad’s regime to build an “innovative chemical warfare program.” According to the report, Iran provided crucial know-how to build equipment to produce “hundreds of tons of precursors for VX, sarin nerve agents and mustard blister agent.”

According to a WikiLeaks cable on the Iran-Syria chemical warfare activities, “New Zealand assesses that the cooperation is mainly driven by Iran’s desire for increased strategic importance in the region. New Zealand also assesses that Iran’s biotechnology sector is far more advanced than Syria’s, and Iran does not mind sharing its knowledge with Syria.”

US LAUNCHES MISSILES INTO SYRIA IN RESPONSE TO CHEMICAL WEAPONS ATTACK

In 2007, a joint Iran-Syria project accidentally caused an explosion while attempting to load a chemical warhead onto a Scud-C missile, wrote Jane’s Defense. The deadly test killed dozens of Syrian military personnel and Iranian engineers.

Sarin gas, along with mustard gas and VX nerve gas, were cited as the lethal toxins during the 2007 explosion at an Aleppo factory.

“The thing that makes Iran so dangerous is it not only exports its weapons to proxies in Lebanon, Syria, and Iraq, but it brags about exporting the ability to manufacture weapons,” Rubin said.

Rubin, who has written about Iran’s chemical weapons program, said it makes strategic sense for Iran to help other countries obtain chemical agents.

“Plausible deniability has always been central to post-revolutionary Iran's strategic calculation,” he said, “and so to proliferate unconventional weapons enables Iran to avoid accountability by raising the number of suspects every time they are used.”

The recent chemical attack debunked former Secretary of State John Kerry’s assertion in 2014 that the U.S. “got 100 percent of the chemical weapons [out of Syria].

The report notes that "this raises questions about Iran’s compliance with its obligations under the Chemical Weapons Convention (CWC), which Iran signed on January 13, 1993, and ratified on June 8, 1997."

The emergence of Iran’s role in enabling Syria’s use of chemical weapons comes on the heels of Secretary of State Rex Tillerson saying: "Iran remains a leading state sponsor of terror, through many platforms and methods." Tillerson said this week, however, that a recent review shows Iran has been compliant with its 2015 nuclear deal.

Iran’s UN diplomatic missions in New York and Geneva did not immediately respond to requests from Fox News for comment.