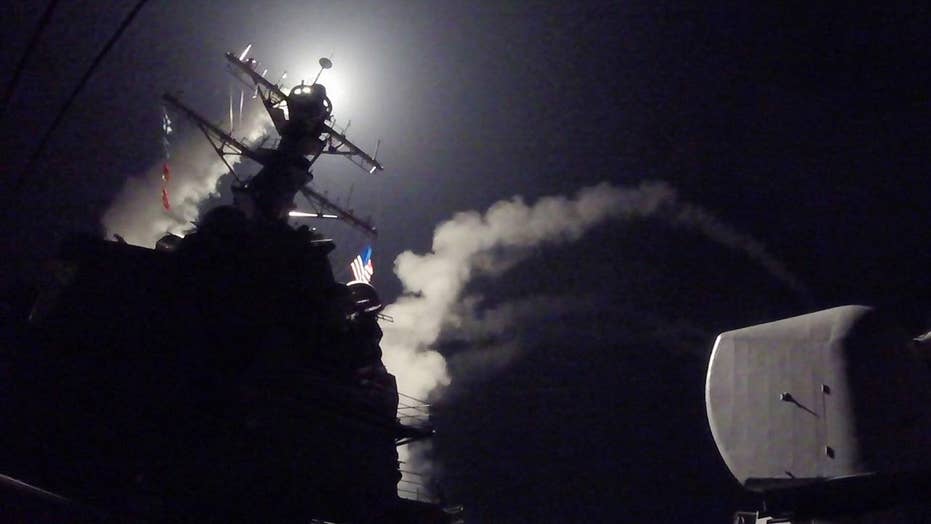 Calls from Congress to the Trump administration

Syria's powerful allies, including Russia and Iran, said in no uncertain terms that the U.S. missile attack last week crossed "red lines" of their own.

"What America waged in an aggression on Syria is a crossing of red lines. From now on we will respond with force to any aggressor or any breach of red lines from whoever it is and America knows our ability to respond well," read part of a statement Sunday from a so-called "shared operations room" believed to include Russia, Iran and militias backing Syrian President Bashar al-Assad's regime.

Assad accused the U.S. of trying to boost the morale of "terror groups" in Syria. The government refers to all those fighting against it as terrorists.

The joint statement appeared on the military media arm of Hezbollah. The Lebanese militant group has invested thousands of fighters in the defense of Assad's government.

The Kremlin said in a statement Rouhani also spoke with Russian President Vladimir Putin by phone.

"Both sides noted the inadmissibility of aggressive U.S. actions against a sovereign state in violation of international law," the statement said. "Vladimir Putin and Hasan Rouhani spoke in favor of an objective, unbiased investigation of all the circumstances of the chemical weapons incident on April 4 in the Syrian province of Idlib."

Rouhani said the U.S. strike would not affect Iran's Syria policy, while Supreme Leader Ayatollah Ali Khamenei said Iran would not withdraw in the face of similar aggressions.

"What the Americans did is a strategic mistake and offense. They are repeating offense of their predecessors," Khamenei was quoted as saying by the official IRNA news agency.

A group of jets -- believed to be Russian -- launched eight raids Sunday on the town of Khan Sheikhoun, the site of the chemical attack that helped prompt the U.S. strike, rebels and witnesses told Reuters. There were no indications anyone was hurt.

Iran has provided crucial military and economic assistance to Assad throughout Syria's six-year civil war. It has organized several Shiite militias from around the Middle East to fight in support of Assad's government and has sent troops and officers from its own Revolutionary Guards.

The U.S. says the strike was in response to a nerve gas attack on Khan Sheikhoun last week, which has been widely blamed on government forces. The Syrian government has denied using chemical weapons.

A Syrian Sukhoi jet took off from the Shayrat airbase targeted by the volley of US strikes, Hezbollah's al-Manar TV channel reported Sunday, saying repairs to the base began within hours of the attack.

Turkish Foreign Minister Mevlut Cavusoglu on Sunday played down concerns of a rift with Russia over Ankara's support for the strike, saying Turkey was committed to the cease-fire mechanisms it has developed with Russia for Syria. Turkey provides military support to some of Syria's opposition forces.

But he said Turkey could not "remain silent" on the Syrian government's chemical weapons use, and insisted Moscow work with Ankara to establish a transitional government in Damascus.

"We want to continue our efforts with Russia in the Astana process in terms of measures to increase trust and establish a cease-fire," he told reporters in Antalya, according to the Anadolu state news agency.

In the days after the Khan Sheikhoun attack, Turkey provided the Syrian Civil Defense search and rescue outfit with 50 protective kits for responding to chemical attacks, and trained them in their use, Anadolu said.