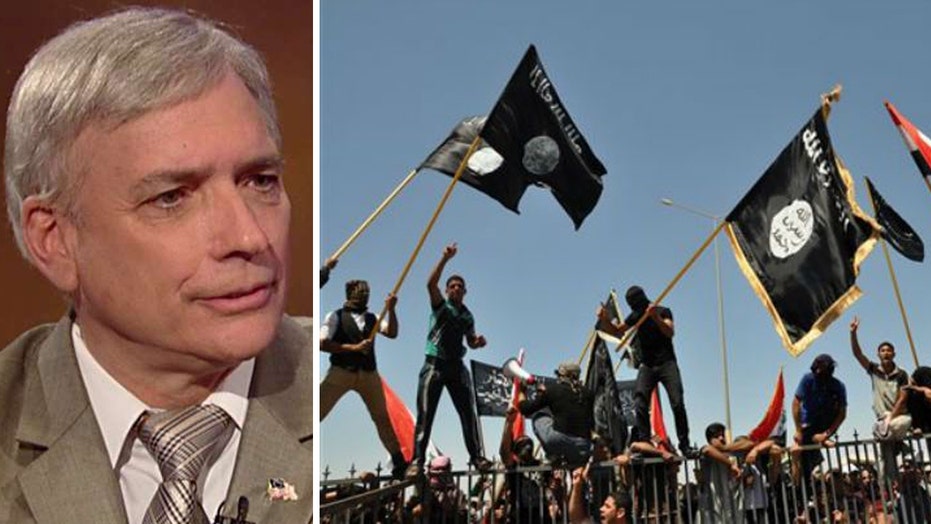 Terror expert warns Western world is being 'invaded' by ISIS

On 'Happening Now,' Steve Rogers predicts a quick increase in attacks if a strong multi-level response is not implemented

A Syrian man who failed to get asylum in Germany pledged allegiance to the head of the Islamic State terror group in a video before he blew himself up near an open-air music festival in southern Germany, wounding 12 other people, Bavaria's top security official announced Monday, as ISIS claimed responsibility for the blast.

According to an initial translation of the Arabic-language video found on the bomber's phone, the 27-year-old man announced a "revenge" attack against Germany, according to the official, Joachim Herrmann. He told reporters the video strongly suggested the bombing was a "terrorist attack."

Herrmann said bomb-making material and a series of violent videos on storage devices turned up at the unnamed attacker's home.

Government officials had ordered to deport the man not once, but twice. He was most recently told July 13 that he would be deported to Bulgaria, spokesman for Germany's interior ministry Tobias Plate told reporters. He said the first deportation notice was issued on Dec. 22, 2014.

The bomber was to be deported to Bulgaria because he had submitted his first asylum request in that country, Plate added. He said Syrians can't be deported directly to Syria because of the situation there.

The blast on Sunday was the fourth attack to shake Germany in a week — three of them carried out by recent immigrants.

The 27-year-old set off explosives he was carrying in a backpack at a bar shortly after 10 p.m. Sunday, having been refused entry to the festival in the southern town of Ansbach because he didn't have a ticket.

The bomber had repeatedly received psychiatric treatment, including twice for attempted suicide, authorities said. Police said the attacker had also been known for drug possession.

Roman Fertinger, the deputy police chief in nearby Nueremberg, said it was likely there would have been more casualties if the man had managed to enter the concert venue.

Three of the 12 victims suffered serious injuries in the blast. The attacker's pack had contained sharp bits of metal.

Herrmann said the man's request for asylum was rejected a year ago, but he had been allowed to remain in Germany because of the strife in Syria.

Authorities on Monday morning raided an asylum shelter in the suburbs of Ansbach.

One resident said he had occasionally had coffee with the attacker and they had discussed religion. Alireza Khodadadi told The Associated Press that the man, whom he would identify only as Mohammed, had told him that the extremist Islamic State group was not representative of Islam.

"He always said that, no, I'm not with them, I don't like them and such stuff. But I think he had some issues because, you know, he told lies so often without any reason, and I understand that he wants to be in the center of (attention), you know, he needed (attention)," Khodadadi said.

Authorities said they were alerted to the explosion in Ansbach's city's center shortly after 10 p.m.

Police said the Syrian blew himself up in the outside seating area of a wine bar near the open-air concert.

They said in a statement that security staff noticed the man with the backpack near the entrance of the concert site around 9:45 p.m.

Police spokeswoman Elke Schoenwald said he was refused entry to the concert because he didn't have a ticket. He then sat down on a chair outside the nearby restaurant. According to witness accounts he briefly leaned forward at 10:10 p.m. and then triggered the explosion.

The three-day open-air concert was underway, with about 2,500 in attendance. It was shut down as a precaution after the explosion.

The explosion came as Germany, and the southern state of Bavaria in particular, have been on edge.

Earlier Sunday, a Syrian man killed a woman with a machete and wounded two others outside a bus station in the southwestern city of Reutlingen before being arrested. Police said there were no indications pointing to terrorism and the attacker and the woman worked together in the same restaurant. Polish authorities said she was a Polish citizen.

And an ax attack on a train near Wuerzburg last Monday wounded five. A 17-year-old Afghan asylum-seeker was shot and killed by police as he fled the scene. The Islamic IS group claimed responsibility for the attack.

These attacks came shortly after a Tunisian man driving a truck killed 84 people when he plowed through a festive crowd celebrating Bastille Day in Nice, along the famed French Riviera.

In Munich on Sunday evening, 1,500 people gathered at the scene of the shooting there, lighting candles and placing flowers in tribute to the victims of an 18-year-old German-Iranian. Police said that he had planned the attack for a year.

Munich authorities said Monday at a news conference that a 16-year-old Afghan friend of the Munich attacker may have known of the attack in advance.

Police said Monday the teenager was arrested late Sunday and investigators were able to retrieve a deleted chat between him and the attacker on the messaging app WhatsApp.

Investigators say the two teenagers met last year as in-patients at a psychiatric ward. Both were being treated for online game addiction, among other things.

Herrmann has called those regulations obsolete and said that Germans have a "right to safety."

In January, Bavaria's justice minister launched a state program in Ansbach meant to teach refugees the basics of law in their new host country. The initiative came amid growing tensions and concerns in Germany about how it would integrate the estimated 1 million-plus migrants it registered crossing into the country last year.

Classes include lessons about freedom of opinion, the separation of religion and state and the equality of men and women.

"Germany is an attractive country because it respects the dignity of every human being," an educational film shown to newcomers said, "and it is supposed to stay that way."