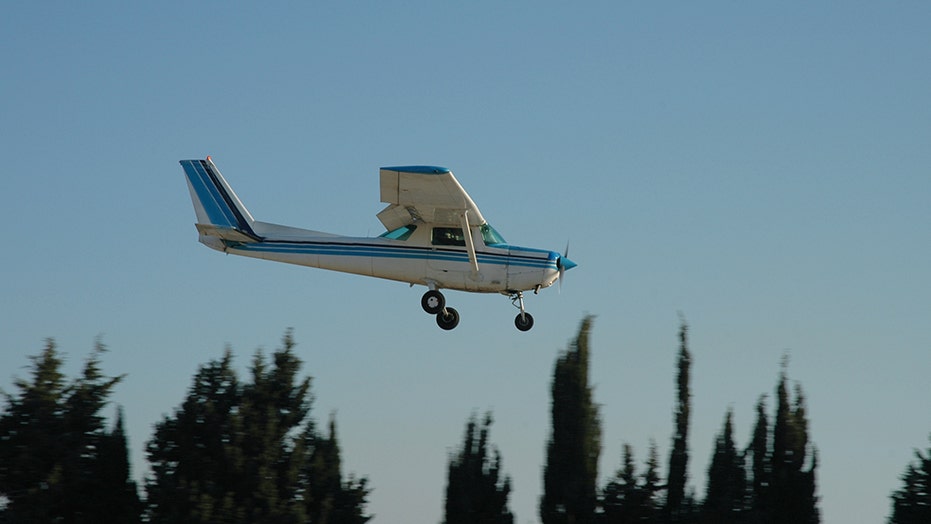 A trainee pilot having his first flying lesson in a two-seater aircraft was forced to make an emergency landing at Perth's Jandakot Airport in Western Australia on Saturday afternoon after realizing his flight instructor blacked out mid-flight.

Max Sylvester, a student pilot in his 30s, contacted air traffic control an hour into his lesson to inform them his pilot, New Zealand-born Robert Mollard, was unconscious, as the trainee's wife and three children watched him from the ground.

The operator was heard asking Sylvester if he knew how to fly the two-seat Cessna 152 airplane, to which he replied that it was his first lesson.

DELTA PILOT CHARGED WITH ATTEMPTING TO FLY WHILE INTOXICATED

A Cessna 152 lowers toward the ground. Max Sylvester was forced to make an emergency landing on Saturday afternoon after his flight instructor, Robert Mollard blacked out mid-flight. (iStock)

"He's leaning over my shoulder, I'm trying to keep him up but he keeps falling down," Sylvester can be heard telling the controller, according to the Australian Broadcasting Corporation.

In a scene out of a movie, the controller kept Sylvester calm while explaining some basics about reducing the small plane's speed before getting into the hard part, landing.

"You're doing a really great job. I know this is really stressful. But you're going to do an amazing job and we're going to help you get down to the ground. Have you landed any aircraft before?" the controller asked.

"No I haven't," Sylvester responded.

With help from the ground, he made a few passes before landing safely an hour later to the delight of Chuck McElwee, owner of Air Australia International, who had been watching fearfully with the family of Sylvester. The instructor was taken to the hospital in serious, but stable, condition.

"She was a rock, let me tell you, she held it together all the way along the line," McElwee said of Sylvester's wife. The only thing that we worried about was after...he was on an adrenaline high. We told his wife not to let him drive...until he had calmed down."

McElwee said it was the first time in his 28 years of running the flying school that an incident like this had happened.

"This could have gone way, way bad," he said.

Thankfully, due to the nerves of Sylvester and guidance from air traffic control, a potential disaster was averted.

"Well, my flight instructor did say I was the best student he'd had," Sylvester said.