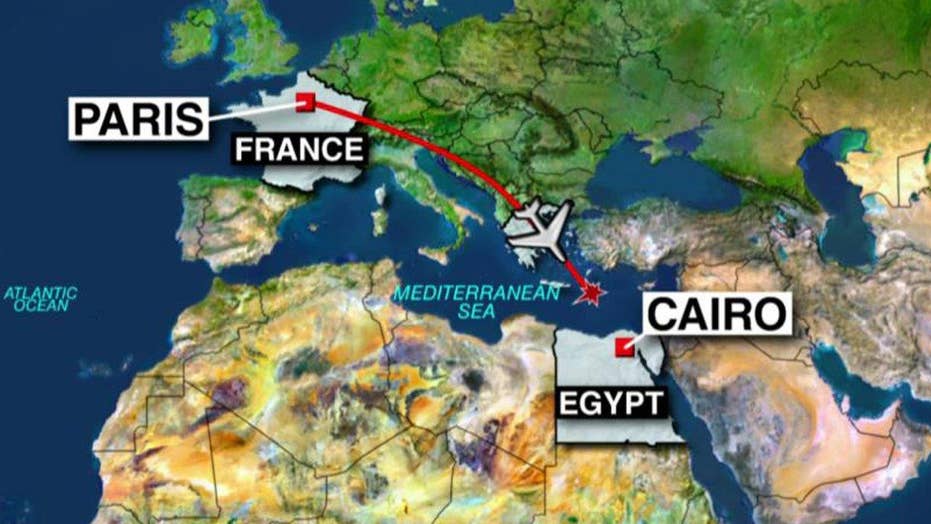 An intense search continued Thursday in the Mediterranean Sea off Greece for wreckage of an EgyptAir flight that went down earlier in the day with 66 people on board, as multiple U.S. officials told Fox News that no explosion was detected by infrared satellites in the vicinity of the crash area.

There were conflicting reports throughout the day as to if any debris from the plane was spotted by search crews.

Officials from EgyptAir initially said debris from the plane was found off the Greek island of Karpathos. Athanassios Binis, head of Greece's Air Accident Investigation and Aviation Safety Board, later told state ERT TV that "an assessment of the finds showed that they do not belong to an aircraft," The Associated Press reported. Binis added that this has been confirmed by Egyptian authorities.

Later in the day, Ahmed Adel, Vice President of EgyptAir, told CNN the debris found Thursday was not from Flight 804.

"We stand corrected on finding the wreckage because what we found was not parts of our plane," he said. Adel added the search for wreckage will continue on Friday.

Several U.S. officials told Fox News that spy satellites used to detect missile launches and explosions around the world did not detect an explosion in the area where the EgyptAir flight crashed.

Cairo-bound EgyptAir Flight 804 dropped from the sky hours after departing from Paris. The plane banked and spun sharply before plunging less than an hour before it was due to land in Cairo at 3:15 a.m. local time, according to aviation officials. Authorities have said terrorism was a more likely cause of the crash than technical failure.

Greek military officials said a Greek C-130 military transport plane is still participating in the search for debris from the EgyptAir jet, but a frigate initially sent to the area has been recalled.

Speaking from Cairo, Egyptian Minister of Aviation Sherif Fathy said the AirBus 320, which left Charles de Gaulle Airport at 11:09 p.m. local time Wednesday and was due in Cairo at 3:15 a.m., "vanished."

"I'm not excluding any theory," said Fathy, who responded to a reporter’s question by saying that the possibility of a terror attack as the cause of the crash is "stronger" than technical failure.

Greek air traffic controllers tried to make contact as the plane left Greek airspace, but the pilot did not respond, he said. They continued to try to reach the pilot until 2:29 a.m. Cairo time, when the plane disappeared from the radar 7 miles southeast of the island of Crete.

What is unknown about the plane's final moments in the air could be consistent with terrorism, David Learmount, a leading British air analyst, told Fox News.

"All this says is that the plane was destabilized . . . it doesn't say why," Learmount said.

Learmount said it is possible that a bomb or someone with a gun or knife entering the cockpit could de-stabilize a plane, but also pointed out that a mechanical or technical defect, as well as human error, could also de-stabilize the aircraft.

McCaul added that there are indicators of an event similar to that in October when a Russian passenger plane was blown out of the sky over the Sinai Peninsula using a timed bomb.

Sen. Diane Feinstein, top Democrat on the Senate Intelligence Committee, told reporters Thursday she hasn't been briefed on the EgyptAir crash but that there was "strong probability that the plane went down with an act of terror."

Flight 804 was carrying 56 passengers, including one child and two babies, three security staff and seven crew members, officials said. Fathy said identities would not be released until relatives could be contacted, but described those on board as including 15 French passengers, 30 Egyptians, one Briton, two Iraqis, one Kuwaiti, one Saudi, one Sudanese, one Chadian, one Portuguese, one Algerian and one Canadian.

Among passengers on missing EgyptAir Flight 804 was a student training at a French military school who was heading to his family home in Chad to mourn his mother.

The protocol officer for Chad's embassy in Paris, Muhammed Allamine, said the man "was going to give condolences to his family." Allamine said the man, who wasn't identified, was a student at France's prestigious Saint-Cyr army academy.

Another passenger on the flight was an Egyptian man returning home after medical treatment in France, according to two shocked friends who turned up at Paris' Charles de Gaulle airport.

"It breaks my heart," said one friend, Madji Samaan.

Kuwait's Foreign Ministry identified a Kuwaiti feared dead in the crash as Abdulmohsen al-Muteiri, but offered no other details.

In Paris, relatives started arriving at De Gaulle Airport outside the French capital.A man and a woman, identified by airport staff as relatives of passengers, sat at an information desk near the EgyptAir counter.

The woman sobbed, holding her face in a handkerchief. The pair were led away by police.

Officials offered conflicting reports of an emergency beacon being picked up two hours after the plane had dropped off from radar. The Egyptian military said that no such distress call was received, but didn’t specify whether they were confirming an initial report or dismissing an EgyptAir statement.

Another U.S. government official said Homeland Security Secretary Jeh Johnson has been briefed at least twice on the missing plane, and that at this early stage, everything is on the table as the government is “tied in tight” with French and Egyptian investigators.

The White House also said in a statement that President Obama has been briefed on the crash.

Greece's defense minister, Panos Kammenos, said Greece has a submarine on standby which is participating in a NATO exercise about 100 miles away from the presumed crash area, while F-16 fighter jets stationed on Crete could also be used if necessary. The country already has a navy frigate, two military transport planes and a radar plane participating in the search operation, while he said Egypt had sent a C-130 military transport plane and two F-16s.

Hollande and French Foreign Minister Jean-Marc Ayrault offered to send military planes and boats to join the search for wreckage.

"We are at the disposition of the Egyptian authorities with our military capacities, with our planes, our boats to help in the search for this plane," Ayrault said. He spoke as Hollande held an emergency meeting at the Elysee Palace.

Later, the French military said a Falcon surveillance jet monitoring the Mediterranean for migrants had been diverted to help search for the EgyptAir plane. Military spokesman Col. Gilles Jaron told The Associated Press that the jet is joining the Egypt-led search effort, and the French Navy may send another plane and a ship to the zone.

Hours after the plane disappeared on Thursday, Fathy told reporters in Cairo that the diameter of the search area will widen, moving further south of the island of Karpathos.

Hollande spoke with Egyptian President Abdel-Fattah el-Sissi on the phone earlier Thursday and agreed to "closely cooperate to establish as soon as possible the circumstances" in which the EgyptAir flight disappeared, according to a statement issued in Paris.

In Cairo, el-Sissi convened an emergency meeting of the National Security Council, the country's highest security body. The council includes the prime minister and the defense, foreign and interior ministers, in addition to the chiefs of the intelligence agencies.

The Airbus A320 is a widely used twin-engine, single-aisle plane that operates on short and medium-haul routes. Nearly 4,000 A320s are currently in use around the world. The versions EgyptAir operates are equipped to carry 145 passengers.

The French Prosecutor’s Office said they will launch an investigation into the EgyptAir crash. The country remains under a state of emergency after terror attacks by the Islamic State killed 130 people in November.

The Associated Press reported that around 15 family members of passengers on board the missing flight had arrived at Cairo airport Thursday morning. Airport authorities brought doctors to the scene after several distressed family members collapsed.

The incident renewed security concerns months after a Russian passenger plane was blown out of the sky over the Sinai Peninsula. The Russian plane crashed in Sinai on Oct. 31, killing all 224 people on board. Moscow said it was brought down by an explosive device, and a local branch of ISIS has claimed responsibility for planting it.

In 1999, EgyptAir Flight 1990 crashed into the Atlantic Ocean near the Massachusetts island of Nantucket, killing all 217 people aboard. U.S. investigators filed a final report that concluded its co-pilot switched off the autopilot and pointed the Boeing 767 downward. But Egyptian officials rejected the notion of suicide altogether, insisting some mechanical reason caused the crash.

In March, an EgyptAir plane was hijacked and diverted to Cyprus. A man who admitted to the hijacking and was described by Cypriot authorities as "psychologically unstable" is in custody.