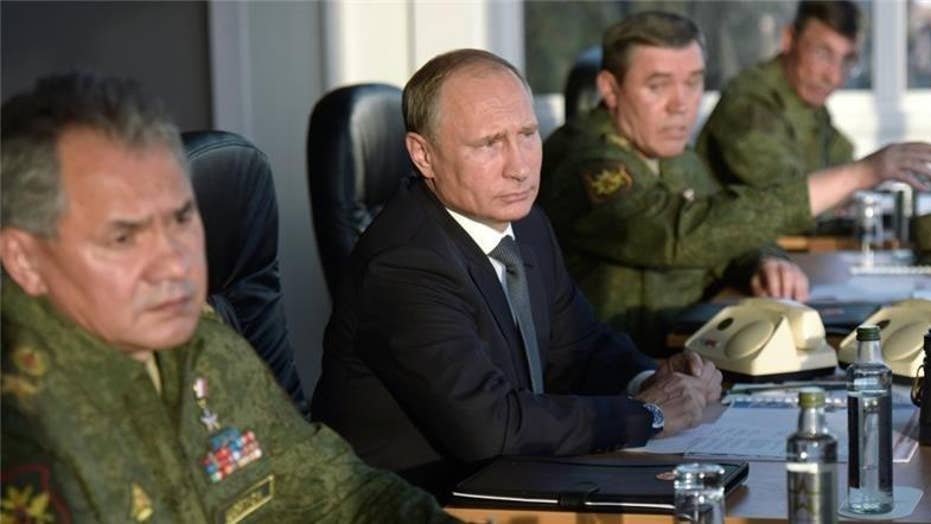 Russian warplanes took off on Tuesday from a base in Iran to target Islamic State fighters and other militants in Syria, the U.S. military confirmed -- a move seen as a widening of Moscow's bombing campaign, while drawing Russia and Iran closer as the Obama administration is seeking greater cooperation with Moscow in its fight against the radical insurgents.

"As we understand, they hit three areas in Syria. One area has ISIS fighters in it, and we have hit there ourselves before. The other two areas do not have ISIS concentrations," Col. Chris Garver, a Baghdad-based U.S. military spokesman, told Fox News.

Garver said the Russians bombed ISIS in central Syria near Dayr Az Zawr and conducted the two other strikes in northwest Syria near Aleppo, where rebels have been battling Syrian government forces loyal to President Bashar al-Assad.

Fox News has reported that Russia previously used Iranian bases to transfer supplies and refuel jets. This is not the first time Russia has used those bases.

The long-range bombers took off from near the Iranian city of Hamedan, around 175 miles southwest of Tehran, flying over Iraq to reach Syria.

Russia and the U.S. have a memorandum of understanding to coordinate air activities over Syria. "It didn't impact our operations," Garver added. He would not say whether any U.S. aircraft were moved.

Normally, Russia flies its bombers from a base in southern Russia.

Meanwhile, Syrian opposition activists said a wave of airstrikes on rebel-held parts of the northern city of Aleppo killed at least 15 civilians and wounded many others on Tuesday, but it was not clear whether the strikes were carried out by the Russian or Syrian government's air force.

The Russian military move suggests cooperation on the highest levels between Moscow and Tehran, both key allies of the embattled president.

"An attempt by Russia and Iran to prop up Assad and try to pacify the population is just going to get them stuck in a quagmire," Obama said. "And it won't work."

It comes a day after Russia's defense minister said Moscow and Washington were edging closer to an agreement on Syria that would help defuse the situation in the besieged northern city of Aleppo -- an announcement the State Department did not deny.

Russian Defense Minister Sergei Shoigu said the agreement would "allow us to find common ground and start fighting together for bringing peace to that territory," adding that Russian representatives are "in a very active stage of talks with our American colleagues." State Dept. spokesperson Elizabeth Trudeau responded, "We have nothing to announce at this time. We speak regularly with Russian officials about ways to strengthen the Cessation of Hostilities, improve humanitarian access and bring about the conditions necessary to find a political solution to this conflict."

In Tehran, the state-run IRNA news agency quoted Ali Shamkhani, the secretary of Iran's Supreme National Security Council, as saying that Tehran and Moscow have exchanged "capacity and possibilities" in the fight against ISIS.

"With constructive and extended cooperation between Iran, Russia and Syria and the resistance front (Hezbollah), the situation has become very tough for terrorists and the trend will continue until the complete destruction of them," Shamkhani said.

Russia and Iran have been expanding their ties in the past months after most of the sanctions against Iran were lifted following the nuclear deal with world powers that put restricted Iran's nuclear program from weapons-grade capability.

A top Russian lawmaker, Adm. Vladimir Komoyedov, said Russia's decision to use a base in Iran would help to cut costs, which is "paramount right now."

The Russian ministry's statement issued said Su-34 and Tu-22M3 bombers took off earlier in the day to target ISIS and the Nusra Front militants in Aleppo, as well as in Deir el-Zour and Idlib, destroying five major ammunition depots, training camps and three command posts.

The Nusra Front is Al Qaeda's branch in Syria. However, the group recently announced it was changing its name to Fath al-Sham and severing ties with the global terror network in an apparent attempt to evade Russian and U.S.-led airstrikes. Russia and the U.S. have dismissed the name change as window-dressing.

The nearest air base to Hamedan is Shahid Nojeh Air Base, some 31 miles north of the city. The base has seen Russian aircraft land there before. A report in December by the American Enterprise Institute, based off satellite imagery, suggested the air base saw a Russian Su-34 "Fullback" strike fighter land there in late November. It said a Russian Il-76 "Candid" transport plane also landed there around the same time before both took off, suggesting the Su-34 may have suffered a mechanical issue.

The report described the air base as "quite large with a 15,000-foot runway, extensive taxiways and multiple hangars and bunkers -- all seemingly in good repair." It said it is "ideal for providing covert ground support to Russian combat missions."

Iran's constitution, ratified after its 1979 Islamic Revolution, bans the establishment of any foreign military base in the country. However, nothing bars Iranian officials from allowing foreign countries to use an airfield.

Russia says its bombing campaign in Syria is focused on extremist groups but it has frequently struck others, including more moderate rebels fighting Assad's forces.

Last week, Russian bombers launched a wave of airstrikes on the city of Raqqa, the Islamic State's de factor capital in northern Syria, killing at least 20 civilians according to Syrian opposition activists.